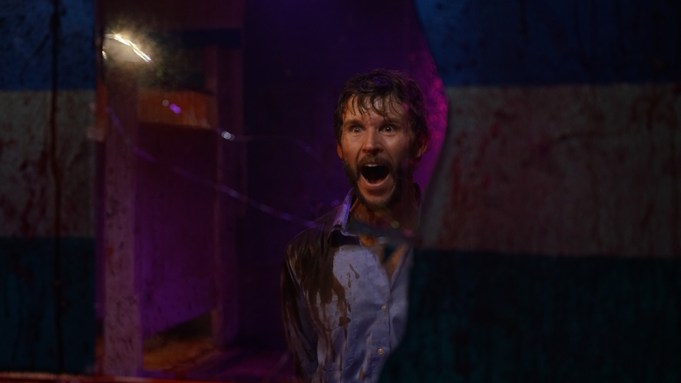 Variety has had exclusive access to a teaser which hints at the film’s monstrous horror and undercurrent of humor.

The film follows Wes (Kwanten) as he waits out a hangover locked in a public restroom with a mysterious entity (Simmons) behind a glory hole. Co-written by Joshua Hull, David Ian McKendry and Todd Rigney, the story takes Wes deep into his own psyche as he wrestles with fate and a glimpse of the unthinkable in this Lovecraft-inspired comic horror.

McKendry (“All the Creatures Were Stirring”) is horror royalty, having worked for over a decade at Fangoria while lending her voice to several popular podcasts (“Killer POV,” “Shock Waves”), and she shows her understanding of the medium throughout “Glorious,” pacing laughs and scares with philosophy in a vivid and cosmic mindjob.

The film, which is co-produced by Alliance Media Partners and Fallback Plan Production in association with Eyebox Entertainment and Citizen Skull Productions, was acquired by AMC’s Shudder earlier this year, and will premiere on the platform following Fantasia on Aug. 18.

Variety spoke with McKendry ahead of the film’s participation at Fantasia.

How did you come to work on “Glorious?” What drew you to the story?

This project came to me the second week of the pandemic. It was a really weird time to be working in Hollywood. No one really knew what we were gonna do; we were just locked down and sanitizing everything. My friend Jay Goldberg sent this over to me and immediately I saw a lot of potential in it. The version of the script that we got was a little different, but it was still a guy in a bathroom with a possible Lovecraftian god.

My husband and I had just watched “Repo Man” for the billionth time; we love that movie. And we had been talking about the idea of having philosophy in the least likely places. Immediately after I finished reading the script I said, “what if I told you I’ve got ‘Waiting for Godot’ in a bathroom?” and he said, “That’s a hell of a pitch.” I felt like we could really turn it into something that’s heavy philosophically, but still a sort of guttural combination between absurdity and straight-up gory horror.

You’ve made a film which begs repeat viewings, with little hints scattered throughout at what might be ahead. How do you find the balance of subtlety in laying breadcrumbs like that for the viewer?

We built it into the script as subtle, but when I’m shooting, I’ll always make sure that I’m giving myself options. I consider that to be my job on set – to give myself options. I don’t have to make the big decisions yet, or at least not quite to the degree that I will have to when we’re in editing. And I want to wink at the audience, but not elbow them. There are versions of this footage where everything that is happening is incredibly overt, where it’s very obvious to everybody. But the edit that we intended to use from the beginning was one where we were just hinting at things, and that’s what we ended up using.

Did you approach a Lovecraftian cosmic horror differently than you would a more traditional horror film?

Oh, yeah. This one I knew I could go all out. And there was so much fun in that. I really got to push where I wanted some of our nightmare imagery to go. There are scenes when our character is having these nightmare trips and I really wanted those to be crazy. For me, they’re the most symbolic scenes. If you ask me what the movie is about, I’m gonna point to two of those big, nightmare trip scenes, and on those I got to get really weird. You don’t always get that option. I just finished another movie that is a more traditional ghost story: I didn’t get to put an eight-foot-tall teddy bear with a giant vagina in its chest in that movie.

J. K. Simmons lends his voice to the creature in the bathroom stall. How was it directing such a massive voice?

Even in the early stages, the biggest thing for me was that the guy in the bathroom could not sound scary from the start. It needs to sound like a guy in a bathroom stall next to you. It needs to sound cordial and friendly and he can’t sound scary. There has to be a reason that Wes wants to keep talking to him. And so J. K.’s voice is perfect because he’s just so multifaceted. The beautiful thing is he and Ryan got to work together a lot. We had several rehearsal sessions before we got into doing the recordings or onto set. So they had already worked through the script, processed it, talked about it. We had big discussions about philosophy, motivations. So by the time that we were actually recording, it just happened.