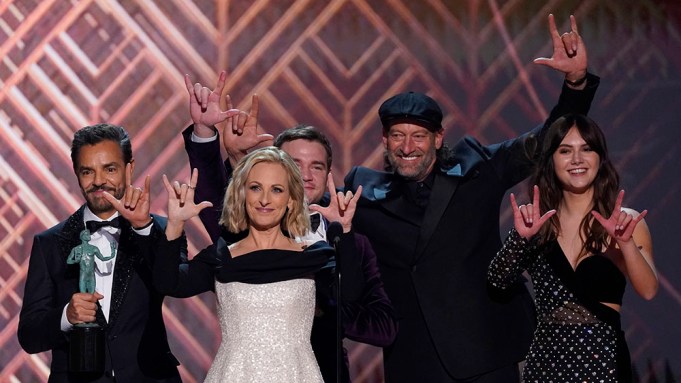 “CODA,” a low-budget indie about a young woman who is the only hearing member of her family, captured the best performance by a motion picture cast at the 28th annual Screen Actors Guild Awards on Sunday. The victory capped an extraordinary run for the film, which premiered at the Sundance Film Festival during the height of COVID, where it earned a record-breaking deal from Apple TV Plus. The ceremony in which “CODA” took top honors played out against a backdrop of geopolitical conflict and a pandemic that has upended the way that movies and television shows are produced and distributed.

One of the players reshaping the future of entertainment, Apple TV Plus, had a very good night at the SAG Awards after being considered something of an also-ran among the various streaming giants. Not only did “CODA” capture two prizes, including a supporting actor statue for Troy Kotsur, but Apple TV Plus’s “Ted Lasso” earned best ensemble in a comedy series and a best actor in a comedy series award for its star and co-creator Jason Sudeikis. HBO’s “Succession,” the story of a rapacious media mogul and his squabbling children that appears to have been ripped from the photo albums of Rupert Murdoch and progeny, won the award for best ensemble in a drama series.

It was a night full of shocks, surprises, and emotional acknowledgments of Russia’s invasion of Ukraine and that country’s ferocious resistance in the face of a shocking attack. It’s a fight, as more than one performer noted during the telecast, that is being spearheaded by Volodymyr Zelensky, a former actor and comic turned president and unlikely wartime leader.

Will Smith, who became a global icon with roles in action blockbusters like “Independence Day” and “Bad Boys,” nabbed best actor for his moving and understated turn as Richard Williams, the father of tennis greats Venus and Serena Williams, in “King Richard.”

“Richard Williams is a dreamer like no one you’ve ever known,” Smith said, as Venus Williams looked on. “He has a power of belief that borders on insanity and sometimes tips over the border, which is absolutely necessary to take something from impossible to possible.”

In a major upset, Jessica Chastain won best actress for her shape-shifting role as televangelist Tammy Faye Bakker in “The Eyes of Tammy Faye” over the more heavily favored Olivia Colman (“The Lost Daughter”) and Nicole Kidman (“Being the Ricardos”). “I love my artistic family and my heart is with our international family, all over the world right now, who are fighting for their safety and their freedom,” Chastain said.

Jean Smart earned her first SAG for best actress in a TV comedy after four previous nominations for her role as a caustic standup in “Hacks.” “Actors, nobody gets us,” Smart exclaimed. “Seriously, what we do is valuable. I mean, we are the tribes’ storytellers, since man crawled out of the cave…We actually are the world’s oldest profession.”

“Squid Game” stars Lee Jung-jae and Jung Ho-yeon won best actor and best actress in a TV drama series for their roles in the survival drama that has become a water-cooler phenomenon. The South Korean show is now the most-watched series in Netflix’s history. It earned a leading three statues in total, including a prize for its stunt ensemble.

Kotsur picked up best supporting actor for his work as a deaf father in “CODA,” while Ariana DeBose nabbed best supporting actress for her role in Steven Spielberg’s remake of “West Side Story.” Hollywood has been under pressure to tell more diverse stories in recent years, and both DeBose, the first queer woman of color to be recognized for acting, and Kotsur, the first deaf performer to win a solo SAG award, represented important milestones. Kotsur used his time at the podium to thank the film’s producers for “…believing in us deaf actors and casting us authentically as actors who happen to be deaf.” Backstage, DeBose reflected on the barrier-breaking nature of her victory. “It’s indicative that doors are opening,” DeBose told reporters.

The awards show returned live and (mostly) in-person after SAG dramatically overhauled the previous telecast in a concession to COVID. A few performers, such as Sudeikis, accepted their awards via Zoom, but most were in Los Angeles to give there thanks in the flesh. Last year, a shortened one-hour version of the gathering was broadcast — winners were informed of their victories a few days before the telecast and their acceptance speeches were taped in advance. But with a mandatory vaccine policy and cases of coronavirus declining, SAG was back in force with stars gathering to celebrate the art of cinema, television and streaming, complete with a red carpet and a packed house. The theme of the show was, appropriately enough, “Together again.” But though spirits were buoyant, it was hard to escape the specter of a world at war. Even as the entertainment business joined together to honor itself, Ukrainians were desperately trying to repel Russian invaders in a conflict that threatened the stability of Europe and the rest of the globe. It was a situation that did not go unacknowledged.

“While tonight is a celebration, we are all at the same time holding a place in our hearts for the people of Ukraine and sending our thoughts, prayers and hopes for impending peace,” Leslie Odom Jr. said at the start of the broadcast. Those sentiments were echoed by Smart, Fran Drescher, the former star of “The Nanny” who was recently elected president of SAG-AFTRA, Michael Keaton, Chastain and “Succession’s” Brian Cox, who urged the audience to also remember Russian citizens who opposed Vladimir Putin. “We should really join in celebrating them and hoping that they can actually make the shift, as I believe they can,” Cox said to a standing ovation.

There were other moments where the emotion of the night and the many threats facing the world cast a pall over an otherwise celebratory occasion. Keaton, the winner of best actor in a TV movie or limited series for his work in “Dopesick,” choked up while accepting his prize for his role in the drama about the opioid crisis. It was a project that cut close to home, Keaton said. He dedicated his statue to his nephew Michael, who died in 2016 following an accidental overdose of heroin and the synthetic opioid fentanyl. Best actress in a TV movie or limited series went to “Mare of Eastown’s” Kate Winslet, who was not on hand to accept her prize.

The Hollywood that gathered to toast the best performances of 2021 is being dramatically reshaped from the one that assembled during the last, pre-pandemic SAG broadcast. Major media companies like WarnerMedia and Discovery are merging, storied studios like MGM/United Artists are being absorbed by tech giants like Amazon, and a fierce contest to dominate the world of streaming is being waged. No longer is Netflix the only game in town. In the past two years, Disney, Comcast, WarnerMedia, and ViacomCBS (recently rechristened Paramount Global) have all launched in-house streaming services, while Amazon and Apple, armed with seemingly endless access to capital, have accelerated their entertainment ambitions. At the same time, the theatrical business has struggled to return to pre-COVID levels and many of the films up for major awards on Sunday, such as “Belfast” and “King Richard,” failed to connect at the box office.

The Screen Actors Guild is named for the union of working actors who appear in movies and shows and their membership has significant overlap with that of the Academy of Motion Picture Arts and Sciences, the group behind the Oscars. That means that awards watchers will pick over the list of the night’s winners, specifically Chastain’s unexpected victory, to see what they portend for the Academy Awards. “The Power of the Dog,” a revisionist Western that explores themes of toxic masculinity and sexuality, was shut out at the SAG Awards. It enters the Oscar race with a leading 12 nominations.

Some performers went into Sunday’s broadcast knowing they would be honored. Dame Helen Mirren received SAG’s lifetime achievement award for a career that includes turns in “The Queen,” “Prime Suspect” and “The Madness of King George.”

“Any achievement that I’ve exceeded in is the result of my mantra which basically is — be on time and don’t be an ass,” Mirren said. But Mirren closed on a more reflective note, hailing the profession and the other actors in the audience who had also devoted their lives to the craft of inhabiting the dreams, setbacks and wishes of other people all around the world. “I’m sorry, you’re a magnificent tribe stretching across culture, history and time,” she said.