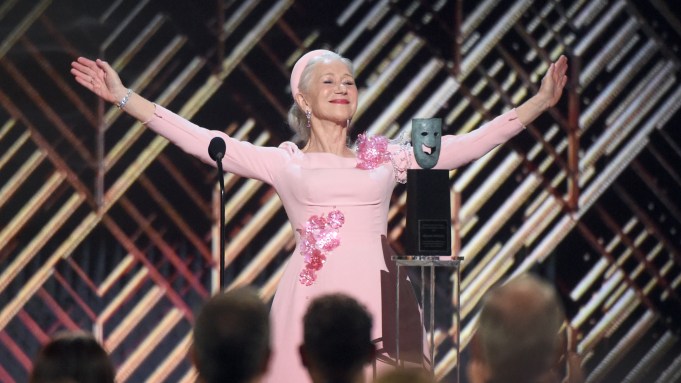 Meryl Streep chatted with Venus Williams. Lady Gaga reunited with Bradley Cooper, her co-star from “A Star is Born.” Andrew Garfield and Jamie Dornan fanned out for Cousin Greg (also known as Nicholas Braun) from “Succession.” And Will Smith, as warm as ever, mingled with practically everybody.

Yes, it was like old times in Hollywood at the Santa Monica Barker Hangar on Sunday night. The 28th annual Screen Actors Guild Awards pulled off the first in-person awards ceremony of 2022, moving ahead as if things were normal after other gatherings canceled or went entirely virtual due to the omicron variant. (Last year’s SAG ceremony was pre-recorded, held over Zoom.)

In typical years, the SAG Awards tend to be thought of as a preview for the Oscars, given that the actors who vote on them make up the biggest branch of the Academy. But this year’s event — where Apple picked up top awards for “CODA” for best film ensemble and “Ted Lasso” for best TV comedy ensemble (which the cast accepted virtually from London because they had to work) — had more to prove than in previous telecasts. It was like a high school homecoming game, a chance to see old friends in person again after a long time away.

With strict COVID-19 protocols, the SAGs offered hope that Hollywood might be able to ease back to life as it once was. During other COVID-19 outbreaks, award shows — such as the Oscars and Emmys — have tried to bring people together in a more limited way. But the SAGs were essentially business as usual, with a parade of A-list movie and TV stars in a crowded room together. The ceremony benefited from widespread booster shots and California’s recent falling COVID cases.

Before the glamour of an awards show, attendees had to jump through some hoops. First, everyone who attended the SAG Awards had to show proof of being vaccinated and receiving the booster. Next, you had to get a PCR COVID-19 test within 48 hours of the Sunday ceremony. Finally, on the way inside the show, everyone had to allow for a rapid antigen test and temperature check — which were conducted by suited medical professional as guests waited in a long line of black cars.

As a result of all these safety protocols, the scene outside the SAGs resembled something out of “Contagion.” But the good news: the on-site testing was handled relatively quickly, so that there was only about a 20 to 30-minute wait in your car before you were given the clear to pull up to the show’s entrance.

2. Give me some space, please!

Once inside, guests — especially the nominated actors — moved around, ate and drank without wearing any face masks. The red carpet was less cramped than usual, perhaps because not as many outlets were given access. And the tables inside the venue were spread out to give people more space.

One of the big winners of the night was Netflix’s global phenomenon “Squid Game.” The South Korean TV series took home two major prizes: Lee Jung-Jae picked up best male actor in a drama series over the guys of “Succession” (beating out Jeremy Strong, Brian Cox and Kieran Culkin). And Jung Ho-Yeon was named best female actor in a drama series, in a category that included Jennifer Aniston and Reese Witherspoon from “The Morning Show.” As the cast of “Squid Game” celebrated both wins, Sandra Oh — nominated for “The Chair” — joined them at the commercial break for a group hug.

Between awards, the SAGs always offer a chance to see A-list celebrities in their natural habitat. Even during a pandemic, that proved to be the case. Meryl Streep huddled with Tyler Perry and Helen Mirren, who was honored with the Lifetime Achievement SAG Award. Selena Gomez rested her head on the shoulder of her seatmate Martin Short, her co-star from Hulu’s “Only Murders in the Building.” Garfield proved to be a big “Succession” fan, congratulating Jeremy Strong for winning best ensemble in a drama for the HBO series. Jared Leto worked every corner of the room, at one point gathering with Javier Bardem and Daveed Diggs. And Cate Blanchett embraced Julianna Margulies during an early commercial break.

When Salma Hayek announced Keaton as the winner for his performance in “Dopesick” (in the category of best male actor in a television movie or limited series), he was nowhere to be found. It turns out, Keaton was using the portable toilets at the back of the venue, a long trek from the stage. As he walked out of the bathroom, someone told him: “They just read your name!” And so, Keaton ran to get his award — barely making it to the stage in time.

Marc Malkin contributed to this story.