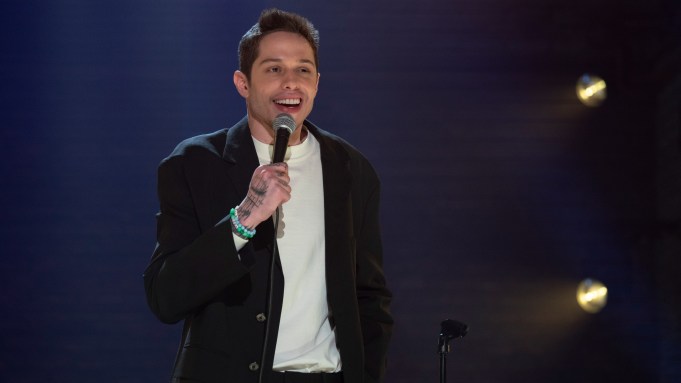 In the new Amazon rom-com “I Want You Back,” Pete Davidson has a small but very memorable cameo where he gives partygoers molly, gets on a roof, strips off his clothes and jumps into a jacuzzi. At the film’s Los Angeles premiere, director Jason Orley revealed how he snagged the “SNL” star last minute for the role.

“I didn’t even tell him what he’s doing,” Orley said. “I said, ‘Can you come down for a night?’ and he said ‘Sure!’ And he showed up and I said, ‘Okay, get up on this ledge and take off your clothes.’ And he was like, ‘What are you talking about?'”

Orley first worked with Davidson on “Big Time Adolescence,” his 2019 directorial debut where the actor played a 23-year old burnout who is best friends with a high schooler. Orley went on to direct Davidson’s stand up special “Pete Davidson: Alive From New York,” which premiered on Netflix a year later.

According to Orley, for the “I Want You Back” cameo, Davidson was strapped to the ledge of the roof from his underwear. He then had to jump from high up onto a protective pads on the ground. Davidson did the stunt very shortly after he was informed what would happen.

Scott Eastwood on working with Pete Davidson in #IWantYouBack: "He does whatever he wants. Which I kind of like." https://t.co/UelpGBuEH6 pic.twitter.com/adEJ655SXW

“Until like 10 minutes before, he did not know” Orley said. “He thought he was going to do a funny scene with Charlie Day. He did not know any stunts were involved. And then he got there, and he saw another person who looked exactly like him, and had his tattoos and he was like, ‘Stunt man! What’s happening? Why do I have a stunt man for this comedy scene, I thought I was just going to joke around with Charlie Day.’ And I said, ‘Nope, you’re getting up on the roof.'”

“I Want You Back” stars Charlie Day, Jenny Slate, Gina Rodriguez, Scott Eastwood, Manny Jacinto and Clark Backo. The film focuses on Peter (Day) and Emma (Slate), two people dumped by their long-term partners who team up to ruin their exes’ new relationships. The film is produced by Peter Safran and John Rickard as well as Isaac Aptaker and Elizabeth Berger, who also wrote the screenplay.

“I Want You Back” is available to stream on Prime Video Feb. 11.