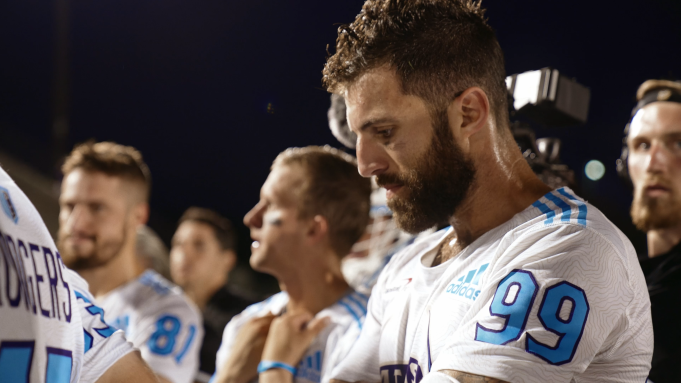 "Fate of a Sport"

“Fate of a Sport,” premiering at the 2022 Tribeca Film Festival, has unveiled its first trailer exclusively to Variety.

Covering the world of professional lacrosse and one of its most controversial and high-profile stars, Paul Rabil, the film deals in much more than triumph on the pitch — encompassing millions in capital fundraising, talent poaching and lawsuits from legacy athletic clubs, all against the backdrop of a global pandemic.

“Even in the regular lacrosse league, guys still have to have a second job,” a narrator explains in the clip, alluding to the fact that professional lacrosse is nowhere near as well-funded or rewarding for its players on the national stage. So Rabil and his brother Mike decided to break ranks and potentially sacrifice Paul’s decorated career to launch a league of their own (the Premier Lacrosse League).

“I think they saw pro athletes in a league with a battered reputation, being underpaid and unhappy, who decided to take things into our own hands,” Rabil said of James and Carter coming on board the doc. “To break away from the establishment and take ownership in the new league … that felt special.”

Rabil told Variety that mentorship was a cornerstone of the new league.

“In addition to my brother Mike co-founding the Premier Lacrosse League and leading as our CEO, he has always been my mentor both personally and professionally,” he said. “Across industries, I’ve received advice from Adam Silver, Don Garber, Erika Nardini, Mark Cuban, Stephanie McMahon, Mike Levine, Rich Antoniello, DeMaurice Smith, Gary Vaynerchuk … the list could go on, respectfully. Each of these people have been rooting us on from the inception of what we thought pro lacrosse could become.”

“Fate of a Sport” is from Shoreworks and Time & Room Productions, in association with Uninterrupted and Cloverhill Pictures. The Tribeca premiere will take place outdoors at Battery Park on June 15.