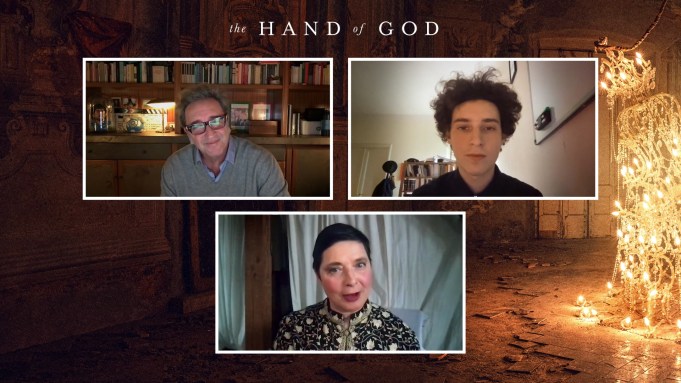 As we enter the final countdown to the Feb. 8 Oscar nominations announcement, Isabella Rossellini is clearly rooting for Paolo Sorrentino’s “The Hand of God,” which is Italy’s candidate for the Academy Award for Best International Feature Film and among the shortlisted titles.

To help promote the pic with Academy voters, Rossellini engaged in an online chat with the director and young Italian actor Filippo Scotti, who plays Sorrentino’s alter-ego Fabietto in the pic. She also wore a gold horn amulet that belonged to her father, the late great Italian master Roberto Rossellini, for good luck.

Here are edited excerpts of the conversation, to which Variety has been given exclusive access.

Rossellini: So here we are. All the ghosts are coming [out] because this film has so many references to cinema. It’s such a love letter to Italy, and particularly to Naples. For us, Italians, they [the references] also have the depth of something that is very much part of our culture. For example, I am referring to Federico Fellini’s voice. Federico Fellini is in the film; but he’s only a voice, and he had a very typical, high pitched voice that everybody knows in Italy, and an accent from the part of Italy where he came from, Rimini. So although he doesn’t appear, you know, it’s the casting of a great genius. But for us Italians, there is also that added voice, and [also] the music that you’ve used.

Sorrentino: The decision was made gradually over a long time. Every time I spoke with friends, and with my family members, about my teenage [years], about my joy and my pain, everybody told me that it was a good idea to try to tell this in a movie because it was an unusual story. And this was one of the reasons I decided to do it. But there are also other reasons. Of course, the [main] reason is that for me it was important to try to change the course of things. Because it’s been a long time that I have been having this sort of monologue with myself about my loss of [interior] balance. Suddenly, I understood that after more than 20 years, I hadn’t solved anything at all, [just] speaking with myself. And so, the idea of making a movie about this in order to try to fix the things became, over the years, something increasingly important for me.

Rossellini: You lost your parents in a tragic accident and both of them in the same day when you were a teenager, and in the film you portray this. [But] the film is very joyful. In the first part of the film you portrayed the love between your parents, the family, your extended family. And then after that, the film changes tone and it becomes very tragic and one can feel your depression…I’m sure the 20 years of silence during which this film was maturing inside you have helped you make the film and come out of that incredible, sad accident.

Sorrentino: Yes, I think so. Now it’s [been] more than a year since I shot the movie. And yes, I have to say that it’s strange because now I am sharing my pain with a big audience…Many people are speaking about the movie. So, it’s like now my story is not my story anymore. It’s something that belongs to everybody watching the movie.

Rossellini: I have to say that sometimes I think when things are very, very personal, they get to become universal. And that was the feeling I had watching your film. We’ve all had losses. Your circumstances were so surprising; so unusual to lose your parents when you were so young. You know, in the accident with the carbon monoxide that suffocated them. And yet we all have pain. And so now, Filippo I wanted to ask you, was it difficult to enter into a story that was so personal to Paolo?

Scotti: When I received the script, I read it as, you know, just as a person who is reading a script, without thinking about, you know, all the process [behind it]. So I was very touched by the script and I entered into it and then when I started thinking that I should start preparing myself for the role, I kind of lost focus of everything. So then I had huge anxiety. And when I started shooting, I was very stressed. But at the same time, I felt after the first, or actually after the second day of shooting, I was like: ‘Maybe I should think about the character [just] as a character without thinking about Paolo’s story.’ So basically, after two days of shooting, I decided to read the script again and to think about the character as a character. And it was that simple switch that helped me a lot, because then I was able to go to Paolo and ask him questions without [any] anxiety.