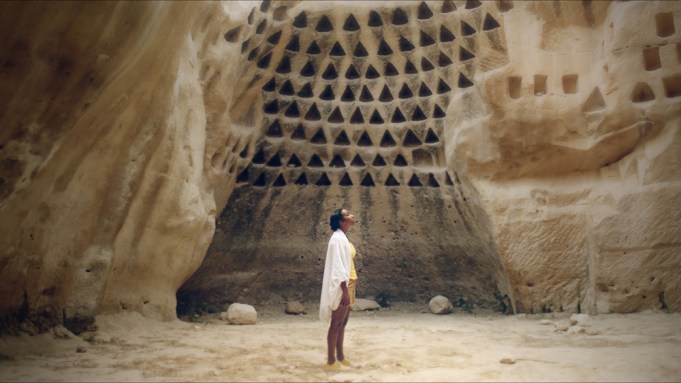 The trailer has debuted for “America,” a drama directed by Ofir Raul Graizer (“The Cakemaker”), which will world premiere at Karlovy Vary Intl. Film Festival in the Crystal Globe Competition. Beta Cinema is handling world sales.

The film centers on Eli, an Israeli swimming coach living in the U.S. A phone call notifies him that his father, who he has not been in touch with, has died. Eli reluctantly travels to Tel Aviv for the first time in 10 years to deal with the estate. On his short trip, he decides to visit his childhood friend Yotam, who used to swim with Eli when they were young. However, Yotam has left swimming long ago. He is running a flower shop in Jaffa with his fiancée Iris, who, like Eli, is not in touch with her family. When Eli comes to visit the two, he will set in motion a series of events that will affect everyone’s lives.

Graizer says: “For me, the core of the story is a strong and almost metaphysical friendship or companionship. But I believe and hope everyone who watches it will find something else, because it tells different stories. It’s about life changing abruptly, our dreams and aspiration suddenly adjusting to a new reality that forces us to deal with our past and re-think our place in the world. It’s a story about finding or rediscovering the term ‘home.’ It’s also a coming-of-age story. It deals with childhood, guilt, sacrifice, and the power of healing and regrowth. It’s also about the choice between the one we love and the one we desire.”

The film is produced by Itai Tamir; the coproducers are Marcos Kantis, Jan Macola and Ami Livne. It is a Laila Films production, with Schiwago Film and Mimesis Film coproducing. It stars Oshrat Ingedashet, Michael Moshonov (“Mary Magdalene”) and Ofri Biterman.

“America” will be distributed in Israel by Nachshon Films and in the Czech Republic by Mimesis Film.

Graizer’s student film “A Prayer in January” was his break-out success. It was invited to 20 film festivals and was distributed by Edition Salzgeber. After graduation, Graizer wrote, directed and produced several more short films that were screened at Cannes, Clermond Ferrand, Max Ophüls and more.

In 2009, Graizer moved to Berlin and started developing his first feature film “The Cakemaker.” The project was granted the Nipkow Program and was invited to several co-production markets like Berlinale and Agora. He and his producers decided to shoot “The Cakemaker” on a micro budget of Euros 80,000 in 21 days, in Berlin and Jerusalem. Based on the rough cut, producer Itai Tamir, who has been Graizer’s filmmaking partner from the start, managed to raise funds to complete the film. Films Boutique picked up and handled “The Cakemaker” internationally. It premiered at Karlovy Vary in the main section in 2017, and won the Ecumenical Jury Award. It was invited then to more than 100 festivals including San Sebastian, Istanbul and Palm Springs.

The film was released theatrically in 26 countries including U.S., France, Germany, Japan and Mexico. It won numerous awards, including seven awards of the Israeli Film Academy, thus becoming Israel’s official entry to the Oscars. Later, Netflix purchased “The Cakemaker” in the U.S. It was also optioned for a Hollywood remake, which is in the works.

Another film that Graizer developed is the psychological art-house drama “The Shepherd’s Dream,” which was financed by the IDM – Südtirol Film Fund. Graizer hopes to shoot the film in the near future. In addition, he wrote a cross-genre thriller “Beautiful Absence,” and is attached to the musical bio-pic “Moondog,” written by “Law & Order” staff writer Denis Hamil. Graizer was hired to join the staff of a high-profile TV series that will be shot in Israel in 2023, and is developing a number of new projects for film and TV in the U.S. market.