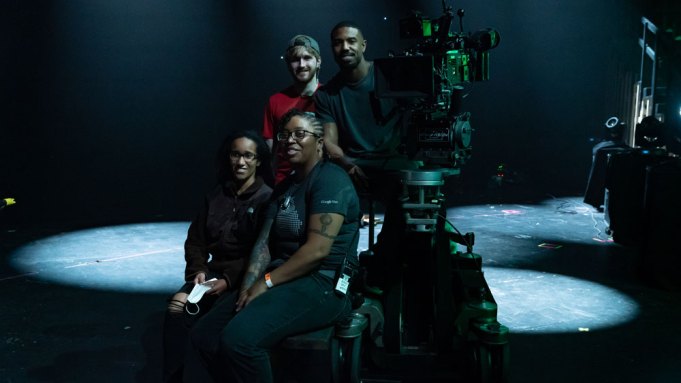 MGM’s “Creed III” has partnered with the Georgia Film Academy (GFA) to hire eight student interns to work on the boxing drama, which marks star Michael B. Jordan’s directorial debut.

“On behalf of Michael and the filmmaking team for ‘Creed III,’ we are thrilled to welcome Georgia Film Academy students into our ‘Creed’ family,” said Elizabeth Raposo, president of Jordan’s Outlier Society. “We are inspired by the mission of the GFA and believe that mentorship of the next generation of filmmakers is essential to the longevity of our business. Outlier Society believes in an inclusive, equitable and fun filmmaking environment and we are honored to have the next generation of young filmmakers join us on this journey.”

The new partnership furthers the goals of the Georgia Film Academy, established in 2015 to create pathways for the next generation of film industry professionals by gaining experience working on some of Hollywood’s hottest film and television projects.

Production on the third “Creed” movie began Jan. 18 in Atlanta, with a theatrical release planned for Nov. 23. The eight GFA interns placed on the set of “Creed III” are working positions in the production office, the AD department, video assistant, VFX, grip/rigging, electric/lighting and SPFX.

“The Georgia Film Academy is excited to partner with MGM and place our students into professional internships on ‘Creed III,’” stated Jeffrey Stepakoff, GFA executive director. “This is the kind of public-private partnership which puts Georgians to work and makes our state ready to support all the production activity of today and tomorrow. On behalf of our students, we appreciate the opportunity to be part of the ‘Creed’ family.”

Part of the University System of Georgia and the Technical College System of Georgia, the GFA is a statewide effort providing opportunity for students to intern in a wide array of disciplines on the film, as well as in-classroom course work and academic credit toward their degree programs. To date, more than 1,000 students have completed their production certifications and training on more than 125 film and television productions including: “Ant-Man,” “Thor,” “Pitch Perfect 3,” “Godzilla,” “I, Tonya,” “Avengers: Infinity War,” “Jungle Cruise,” “Step Sisters,” “Dumplin’,” “A Bad Moms Christmas,” “The Walking Dead,” “MacGyver,” “Black Lighting,” “The Originals,” “Stranger Things,” “Watchmen” and “Black Panther 2,” among others.

The GFA student body is approximately 49% white, 45% African American and 6% Hispanic/Pacific Islander representation. 49% of the students are women.

“We are incredibly humbled by the trailblazing work the Georgia Film Academy has done over the last six years to set students on a path for a career in the industry, while ensuring Georgia film crews, backlots and sound stages reflect the diversity of backgrounds that make the state so special,” added Pamela Abdy, MGM’s Motion Picture Group President. “We believe deeply in GFA’s mission, and look forward to helping discover our industry’s next generation of artisans, storytellers and experts on ‘Creed III.’”