Melissa Barrera admits she had some major issues to overcome while shooting her new Netflix series, “Keep Breathing.” The “In the Heights” star plays an attorney who is the only survivor after her small plane crashes into a lake in the frigid wilderness. “Diving into that water was probably one of the scariest things,” Barrera tells me on this week’s “Just for Variety” podcast. “I have this real fear of drowning. So doing all of that was very therapeutic for me.”

Stunt coordinators gave her breathing exercises to do before diving in. “They would always tell me to take as many deep breaths as I needed until I felt ready,” Barrera recalls.

Like her character, Barrera is a city gal at heart: “I’m a person that enjoys having indoor plumbing and a shower and a toilet. And I don’t like being dirty and I don’t like having to pee in the woods … but I became a lot more outdoorsy because of the show.”

I talked with Barrera on Zoom from the set of “Scream 6.” She reprises her role as Sam Carpenter after making her debut in the super-successful franchise reboot earlier this year. “I can’t tell you anything,” Barrera says. “All I can tell you is that we’re having the time of our lives.”

Neve Campbell recently announced she wasn’t returning for the sixth “Scream” because she didn’t think the salary offer reflected her true worth. “It was shocking, but also, as a woman, I get it,” Barrera says. “Especially as a woman of color, I deal with that stuff all the time where I feel like they’re not paying me what I know that I’m worth. But usually for me, I feel like it’s because I’m a Latina, and they don’t value us as much as white women. So if Neve being a white woman is feeling undervalued, that just goes to show how much of a problem it is in the industry. I applaud her sticking to what she believes in.”

Barrera will be at the Toronto Film Festival next month for the premiere of first-time director Benjamin Millepied’s feature adaptation of “Carmen.” Barrera stars opposite Paul Mescal (“Normal People”). “I think people are gonna be very surprised by this movie,” Barrera says. “It is a very different kind of film and I think it’s not what people expect at all. This is Benjamin’s vision and it’s so unique and so specific and different. He made ‘Carmen’ his own.”

As for working with Mescal, Barrera says, people know that he can sing, but he can dance and he can move and he’s also such an athlete. You know, he’s such a go-getter. We had to do these crazy lifts and stuff and learn to trust each other completely.”

What was more nerve-wracking — jumping into that “Keep Breathing” water or her first lift with Mescal? “I think getting into the water was probably scarier.”

Listen to the full interview with Barrera above. You can also find “Just for Variety” wherever you listen to your favorite podcasts.

Salma Hayek knows about iconic women. Not only did her work as Frida Kahlo in 2002’s “Frida” earn her an Oscar nom, but now she’s a producer of Hulu’s “Santa Evita,” about the disappearance of Eva Perón’s corpse following her death in 1952 at age 33. “It really is a thriller,” Hayek tells me. “Instead of who killed the person, it’s like, where is the body of the person? Who stole it? Who has it? Why did they steal it? I find it very original. It also gives us a fantastic excuse to show Evita [played by Natalia Oreiro] full of life and tell some anecdotes that are not some of the most known.”

Hayek also believes that Perón’s story resonates today because it revolves around women’s rights, equality and advocacy. “The obsession that men have for the body of women, and also the control of women,” she says. “One of the characters says in the show after Eva leaves her body that it’s only men who make decisions about what happens to the body. We go through different men with different kinds of obsessions. Some of them, they’re threatened by her power even after death. When she was alive, she accomplished incredible things in a very short time, including the possibility for women to vote in Argentina. But she felt like she was not helping enough, that she didn’t have enough power. And yet, we see that she’s still powerful, even politically after she’s dead, because a lot of people were threatened by her presence even if she was not there anymore.”

Hayek recently wrapped “Without Blood,” an indie drama written and directed by Angelina Jolie, based on Italian writer Alessandro Baricco’s bestselling novel and co-starring Demián Bichir. “Angelina is the best director I’ve ever worked with,” Hayek gushes. “She’s extraordinary. I think this might be her best movie. She had such a clear vision and yet gave herself the freedom to experiment and gave us the freedom to play with her. It was just nirvana. She has no ego.”

Get to know Dane DiLiegro! The 6’9” former pro basketball player portrays the Predator in Hulu’s “Prey.” “It was a suit, and the head comes off and on,” DiLiegro tells me of his alien costume. “You have to drink enough water so you don’t pass out because it’s so hot, but not too much that you have to go to the bathroom all the time. I know my dietary restrictions. I had to time it all because if I’m shooting a 12-hour day, I have to be cognizant of what’s going in and what’s going out.”

Since launching his acting career three years ago, DiLiegro has appeared on TV’s “Sweet Home,” “American Horror Stories” and “Quest.” He played a monster in Doja Cat‘s “Get Into It (Yuh)” music video. “Even right now, it’s not real to me,” he says. “I still can’t believe it. Every morning, I wake up and I open my eyes and there’s like four seconds of, ‘This is crazy!’”

He spent four hours in makeup for the Doja Cat music video. “I remember she came on set and she said, ‘Can I touch your face?’” DiLiegro remembers. “I was like, ‘Yeah, absolutely, you can touch my face.’ She’s so cool. She was so open-minded and great to work with.” 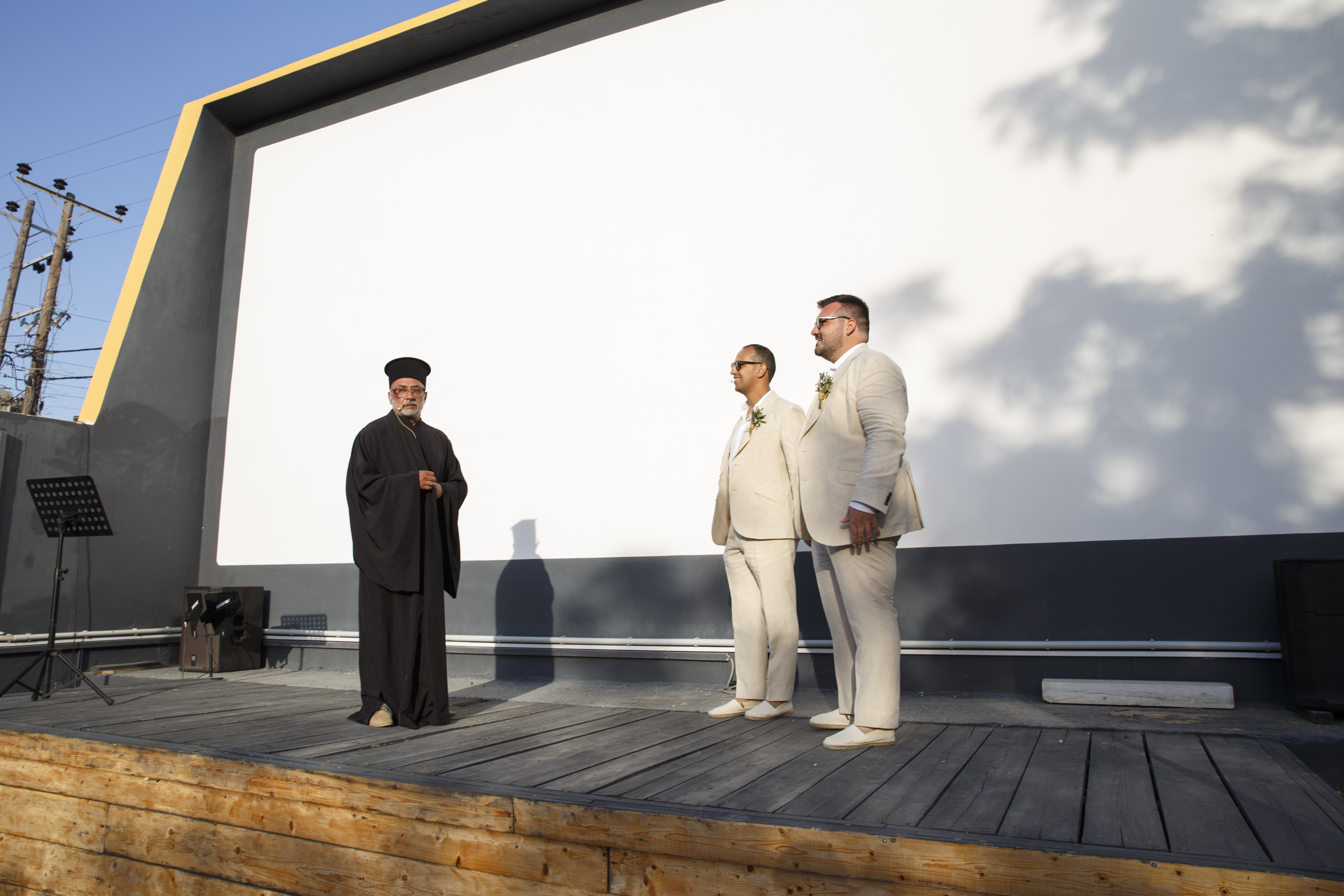 “Tehran” executive producer Julien Leroux and his husband Vasilis pulled off a hilarious wedding ceremony when they were married earlier this summer in Greece. The happy couple asked “Tehran” actor Vassilis Koukalani to pretend to be the Greek Orthodox priest marrying them. “Our fake priest welcomed us both on stage and asked us who he was supposed to marry since brides were missing!” Leroux tells me. “We explained it was us both and that there were no brides.” After some scripted banter, Koukalani left the grooms alone on stage — the ceremony was held in an open-air cinema in Athens — before guests caught on. “Since we didn’t have a priest anymore we asked if someone from our guests could marry us and my husband’s brother Polymeris, who was another accomplice, came on stage and eventually married us.”

I could only imagine what they may do if they ever renew their vows.

Congrats, Joel Goldman! The nonprofit guru has joined On Our Sleeves as national director of social impact and influence engagement. The longtime exec is a favorite in Hollywood following stints with The Elizabeth Taylor AIDS Foundation, Feeding America and St. Jude Children’s Research Hospital.