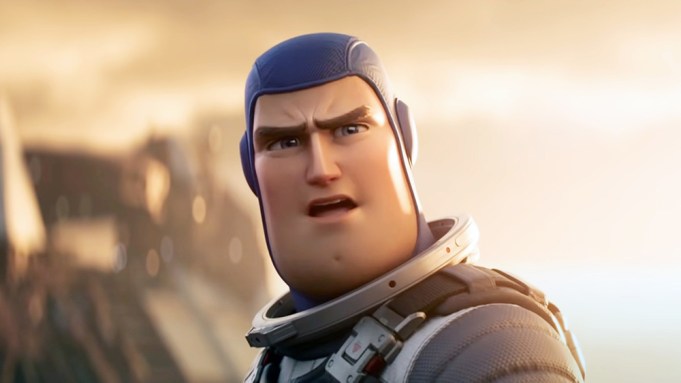 Infinity isn’t a practical milestone at the box office, so Disney’s “Lightyear” will have to settle for a $20.7 million opening day and beyond.

Pixar’s spinoff of its “Toy Story” series blasted off on Thursday night with a respectable $5.2 million from preview screenings. However, the film is now tracking for an opening in the range of $50 million to $55 million from 4,255 theaters in North America, below the initial expectations that pegged the film for a debut between $70 million and $80 million. What’s more, “Lightyear” is struggling to unseat Universal’s “Jurassic World Dominion” from the top slot of domestic charts during the dino-sequel’s sophomore weekend.

There’s certainly winning ways to look at the “Lightyear” opening, as its projected haul would easily mark the highest debut for an animated movie since the onset of the pandemic in North America. Family audiences have been somewhat skittish to return to the big screen as multiplexes have reopened, which had led Disney to rethink its release strategy, opting out of theatrical runs for Pixar’s most recent three animated features — “Soul,” “Luca” and “Turning Red” — and instead debuting them directly on the company’s streamer Disney+ to bolster subscriptions. After spending more than two years away from theaters, a $52 million opening would show that Pixar still has a place on the big screen.

However, it’s not difficult to imagine that Disney was looking to make a bigger splash with “Lightyear.” The film may not even net half of the $120.9 million opening of 2019’s “Toy Story 4,” even though the sci-fi film is a spinoff of Pixar’s crown jewel franchise.

With a hefty $200 million production budget, “Lightyear” has a ways to go before landing itself securely in the black. The film looks to gain an extra bump from family audiences through Saturday matinees and Father’s Day business on Sunday. Critics have generally been favorable, as the film scored a 61% aggregate approval percentage from top critics on Rotten Tomatoes. Audiences seem to like the movie too, with “Lightyear” netting an “A-” grade on Cinema Score, indicating generally strong approval.

“Lightyear” focuses on the origin of the Buzz Lightyear character, who was first in a movie before being made into the action-figure who befriended Woody in “Toy Story.” Within “Toy Story” canon, the character Andy saw “Lightyear” and procured a Buzz Lightyear toy as merchandise. Now, the public of our world can see the movie that lit Andy’s imagination ablaze.

Should the current projections for “Lightyear” hold, “Jurassic World Dominion” could be primed to repeat as the apex predator of the domestic box office.

Universal projects that its sixth entry in the “Jurassic” series will drop 61% from its massive $143 million debut last weekend, raking in $57.1 million over the three-day window. That’s a bit of a steeper drop than the ones that the franchise’s last two entries faced in their second weekends; 2015’s “Jurassic World” fell 49%, while 2018’s “Jurassic World: Fallen Kingdom” went down 58.8%.

Even so, the projected $57.8 million haul for “Dominion” could be enough to secure a second weekend on top of domestic charts. The dino-sequel should expand its domestic gross to nearly $250 million through Sunday, already securely among the top four highest grossing movies at the domestic box office for 2022.

“Top Gun: Maverick” also continues to cruise along smoothly. Paramount is projecting a phenomenally slim drop of 23% for the three-day window, adding a $40 million gross.

The Tom Cruise sequel has become a veritable moviegoing phenomenon since blowing the top off the Memorial Day weekend box office record with a $160 million four-day debut. Since then, the film has enjoyed week-to-week drops of less than 50%, an atypically low figure for theatrical blockbusters. “Maverick” has ridden the wave of spectacular word-of-mouth, becoming the highest grossing 2022 release in the U.S. this week by surpassing Marvel’s “Doctor Strange in the Multiverse of Madness.” And with business still booming, the sky seems to be the limit for “Maverick.”

Disney and 20th Century Studios’ “The Bob’s Burgers Movie” should round out the top five. The adaptation of the long-running animated series should push past a $30 million domestic gross through Monday.