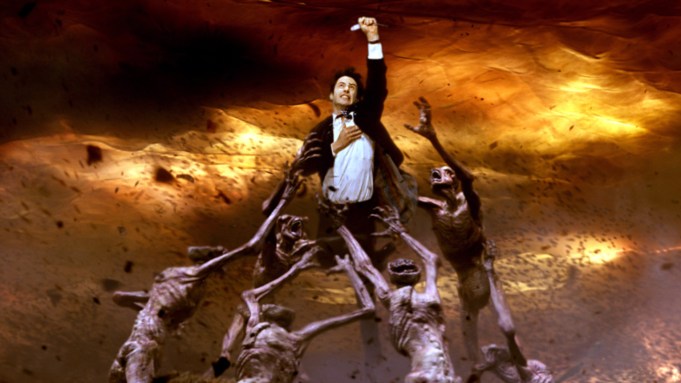 The only soul Satan himself would come up to collect is getting a follow-up film. “Constantine” is back.

Variety can confirm that Warner Bros. will make a sequel to the 2005 supernatural action film “Constantine” starring Keanu Reeves. The blockbuster star will reunite with original director Francis Lawrence, best known for taking over the “Hunger Games” franchise after the first film.

“Constantine” has been a hot property in Hollywood, sparking a NBC series created by Daniel Cerone and David S. Goyer, and was even more recently being developed into a new series for HBO Max by J.J. Abrams’ Bad Robot Productions. However, sources tell Variety that the HBO Max series is now dead, although the streamer had been in early talks with an actor for the lead role before the new movie came together. Four scripts were written for the new adaptation set in contemporary London.

Another Justice League Dark project that is also being put to the side is the “Madame X” series produced by Angela Robinson. But this doesn’t mean both series can’t be resurrected somewhere else. Sources say that both Warner Bros. Television and Bad Robot remain extremely high on both projects and expect to find a new home for them both.

Adapted from the DC comics, John Constantine is an exorcist trying to tip the scales in the battle between good and evil in his favor. Able to see the demons and angels influencing regular folks, Constantine is driven to send every last demon to hell thus solidifying his place in heaven because, “What would you do if you were sentenced to a prison where half the inmates were put there by you?”

This sequel has long been whispered about among fans, especially after the big 15-year reunion both Reeves and Lawrence attended at Comic-Con. Plus the star himself has openly expressed interest in returning to the holy war raging on the streets of Los Angeles. “I just loved that world, ” Reeves told Variety, “and I love that character.”

Details are scarce but we know the bare bones of the deal: Akiva Goldsman (who’s been helming the multiple new “Star Trek” series on Paramount +) will write and produce through his production company Weed Road Pictures, along with Bad Robot’s J.J. Abrams and Hannah Minghella.

Fingers crossed this reunion also brings back the very best interpretations of Gabriel and the Devil himself (Tilda Swinton and Peter Stormare) in the history of cinema. And if Gavin Rossdale wanted to return as well… we’d be down.

Joe Otterson and Ellise Shafer contributed to this report.