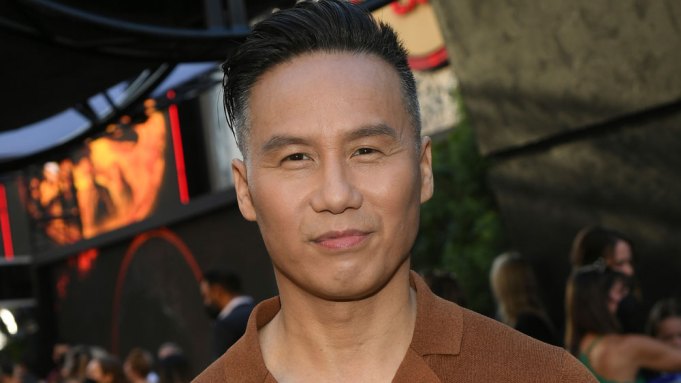 “Jurassic World Dominion” features the long-awaited return of Laura Dern, Jeff Goldblum and Sam Neill, appearing on screen for the first time together since 1993’s “Jurassic Park,” but there’s another franchise O.G. who’s part of the mix — BD Wong.

Wong’s Dr. Henry Wu has also been a central player in the dinosaur film franchise since its inception, as Jurassic Park’s chief geneticist, the InGen scientist responsible for resurrecting these extinct animals. Memorably, Wu’s explanation for genetically engineering all the dinosaurs to be female (“There’s no unauthorized breeding in Jurassic Park”) elicited the classic response from Goldblum’s chaotician Dr. Ian Malcom, “Life, uh… finds a way.”

After sitting out the two “Jurassic Park” sequels (1997’s “The Lost World” and 2001’s “Jurassic Park III”), Wong returned for “Jurassic World” in 2015, and this time he had the memorable quip: “You didn’t ask for reality; you asked for more teeth!” After Goldblum made a cameo in the 2018 sequel “Jurassic World: Fallen Kingdom,” Wong was thrilled to reunite with all three of his former co-stars for “Dominion.”

“We made this movie deep in 2020 — first movie to come back during the pandemic, brand new protocols, we forged new territory on how to make a movie safely — and these three actors were part of this family,” Wong told Variety on the black carpet at the premiere for “Jurassic World Dominion” at the TCL Chinese Theatre on Monday night in Hollywood.

“They’re iconic in that way — people like to use that word a lot, ‘iconic’ — but they’re really icons. They have this way of carrying themselves that’s really unique,” the actor said of Dern, Goldblum and Neill. “So, there was a real special feeling about it.”

That special feeling was reignited as the group reunited on Hollywood Boulevard for the premiere event. The “Jurassic Park” stars (save for Neill, who was unable to attend) were joined by “Jurassic World” leads Bryce Dallas Howard and Chris Pratt, as well as franchise newcomers DeWanda Wise and Mamoudou Athie at the theater, where guests — including “Jurassic Park” star Ariana Richards — got their first look at the sixth dinosaur movie, billed as the “end of the Jurassic Era.”

“To be a part of the chapter closing, at the end of it, that’s really satisfying to me,” Wong said of reprising his role in this film. “I make no bones about it, I came into it, walking out of ‘Jurassic Park’ thinking that the character was totally underserved and thinking, ‘Well, nobody cared about him.’ And then Colin Trevorrow [director and co-screenwriter of the ‘Jurassic World’ trilogy] kind of gave him mouth to mouth, and brought him into this world in which his whole shtick really mattered and really affected other things. I’m always really grateful to have been the actor who got to do that.”

Athie was likewise thrilled to appear in the new movie alongside the original cast. “I’m starting to run out of language for it, but this is so cool, in the most pure fundamental level,” he admitted. ” I’ve admired all these guys for such a long time, and to work with them and have created such a cool project with them all together, with a lot of goodwill and a lot of support for one another, it’s the best.”

The actor’s character Ramsay Cole is an employee of Biosyn, the technology company positioned as a rival to Jurassic Park’s InGen, headed by Lewis Dodgson (Campbell Scott), and his first day on set featured scenes with Dern and Neill.

“I’m sitting in this helicopter and I’m looking at them, they’re looking at me. I have all these lines. And I’m like, ‘I don’t know guys,'” Athie said, recalling that overwhelming feeling. “But they put me at ease so quickly.”

Daniela Pineda (paleo-veterinarian Zia Rodriguez) and Dichen Lachman (the mysterious new player Soyona Santos) first met the legendary trio in the lobby of the U.K. hotel the cast quarantined in while filming. Dern, Goldblum and Neill were in the lobby, while Pineda and Lachman were coming out of the hot tub, wearing bathrobes. “We kind of froze,” Lachman recalled. “We couldn’t believe it. We had a moment.”

The unexpected encounter was just one of the many unbelievable moments that peppered the five-month shoot, completed amid the pandemic.  Trevorrow grew wistful when reflecting on the experience making the movie.

“It’s very personal,” Trevorrow said. “We spent four months living together making this film, and I’ve worked on this for nine years with a lot of people who are friends now. We really put our heart and soul into it.”

VIP+ Analysis: The Films Set to Fight ‘Top Gun’ to Be Summer’s #1