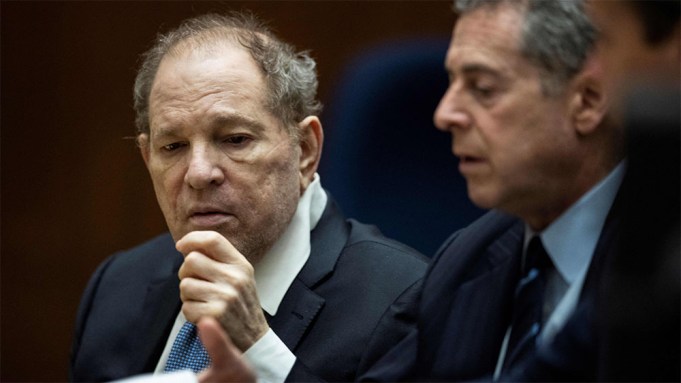 For 10 days, the jurors on the Harvey Weinstein trial debated issues of consent, morality, the casting couch and power imbalances in Hollywood.

At the end of their deliberations Monday, they reached a mixed verdict. They found the disgraced producer guilty of raping a woman known as Jane Doe #1, but acquitted him of a sexual battery of Jane Doe #3. They were deadlocked on charges involving two other women, one of which is Jennifer Siebel Newsom, the wife of California Gov. Gavin Newsom.

When they were released from the case Tuesday afternoon, three jurors explained how they arrived at that outcome. Speaking to Variety at the courthouse, they said that while they empathized with all of the women, it was sometimes hard to determine what had happened beyond a reasonable doubt.

“Everybody seemed very believable — it’s just hard to prove all of it, with time and memory. It’s just their word,” said Jay, a mechanic supervisor who did not provide his last name. “Nothing was black and white. Nothing was super clear.”

Siebel Newsom testified that Weinstein raped her in 2005, when she was an up-and-coming actress and filmmaker. Several jurors said they were troubled that she had exchanged dozens of emails with Weinstein after the alleged rape. In those emails, she sought meetings with Weinstein and asked for campaign contributions on behalf of her husband, who was the mayor of San Francisco at the time.

Michael, another juror, a 62-year-old who works in banking, said that he voted to convict Weinstein on Jane Doe #1 and #2. But he voted to acquit on Siebel Newsom’s allegations.

“I was considering the situation while also looking at her subsequent actions,” he said. “She wanted access to Harvey Weinstein and it sounded like she wanted access to a lot of his resources too… That did raise some reasonable doubt in my mind.”

Jay was also troubled by the communications and meetings between Siebel Newsom and Weinstein: “It looked like they just had a relationship.”

Asked if there was anything the prosecution could have done differently to secure a conviction, Jay said, “Maybe make the emails go away.”

The jury ultimately voted 8-4 in favor of convicting Weinstein on the Siebel Newsom charges. Another juror, Arnold Esqueda, said the vote was divided 6-6 earlier in the deliberations.

Some of the jurors found her testimony to be overly dramatic, said Esqueda, who works as a security guard for the L.A. Department of Water and Power. He said that he suggested that they all re-read the transcript, which allowed them to focus on her words and not on her presentation.

“That switched a couple people without the emotion,” Esqueda explained.

Some of the jurors saw the allegations through the prism of the “casting couch,” picking up on a defense argument that the women had willingly engaged in “transactional” sex.

Michael said the testimony was like “pulling back the curtain on a section of the entertainment industry where flexible morals was a way of doing business.”

He argued that the “casting couch” has been a part of Hollywood for 100 years and transactional sex goes back to Biblical times.

Michael believed that two of the “prior bad acts” witnesses — Natassia M. and Kelly S. — hurt the prosecution’s case because they appeared to concede that they were “playing the game” with Weinstein in hopes of advancing their careers.

“If I was the prosecutor I would have not had them testify,” Michael said. “Those two almost proved the defense’s case… It’s an industry of flexible morals. I’m sure all these women hated every second of what was going on, but this is how the industry is.”

The “casting couch” defense did not work on Jane Doe #1, however. She testified she barely knew who Weinstein was before meeting him at the L.A. Italia Film Festival in February 2013, stating she had only minimal contact with him after he raped her at the Mr. C Beverly Hills hotel.

The defense argued that Jane Doe #1 had simply made up the entire sexual assault — and that neither she nor Weinstein had been in her hotel room that night. The jury did not buy that argument.

“I think the consensus was, their argument that he was never there — we just felt like he was,” Jay said. “It looked like he probably was there.”

All three jurors who spoke with Variety suggested that the argument hurt the defense’s credibility. With a different approach, it appeared that the defense could have won a mistrial on those counts.

“I personally feel they would have had a lot more to work with had they said he was there,” Michael said.

The jurors voted 10-2 in favor of convicting Weinstein of sexual battery against Jane Doe #2, Lauren Young. Ultimately, they landed deadlocked on that count. One juror revealed that the two holdouts were swayed by the defense’s argument that Young’s dress had a button above the zipper, which would have made it difficult for Weinstein to undress her.

“I thought it was a slam dunk,” said Esqueda, who voted to convict on that charge pertaining to Young. He said the others believed that the dress would not have come off her shoulders. “If we could have shown it got off her shoulders, it could have had a solid case.”

The jurors said that the deliberations were respectful, and did not become contentious. Esqueda acknowledged that one juror was “stubborn” and initially voted not guilty on all charges. That juror was eventually persuaded to convict on Jane Doe #1.

They said that Gov. Newsom and his politics were not discussed and were not a factor. The jurors also said that Weinstein’s past conviction and the avalanche of accusations against him did not come up during deliberations.

“Everyone realized the weight of this trial,” Michael said. “The #MeToo movement raises a lot of extremely important issues… Predators have to know that type of behavior is wrong. It’s criminal and it will be prosecuted.”

Michael continued, stating that a main message of the trial is that if a woman is trapped in such a situation, she should get to safety as quickly as possible. “Go to the police,” he said. “Report it. And for God’s sake do not continue to do business with this person.”

Regarding the casting couch, Michael said, “It’s time that it stops — it really is.”

“These people are getting basically what they deserve,” he said, referring to predators who have been exposed by the #MeToo movement.

Michael added that it was difficult, however, for jurors to determine what happened many years later, without any video or audio of the incident and with little to go on aside from the accuser’s word.

“Just because someone is found not guilty, it doesn’t mean they’re innocent,” he said. “It just means the facts weren’t proven beyond a reasonable doubt.”