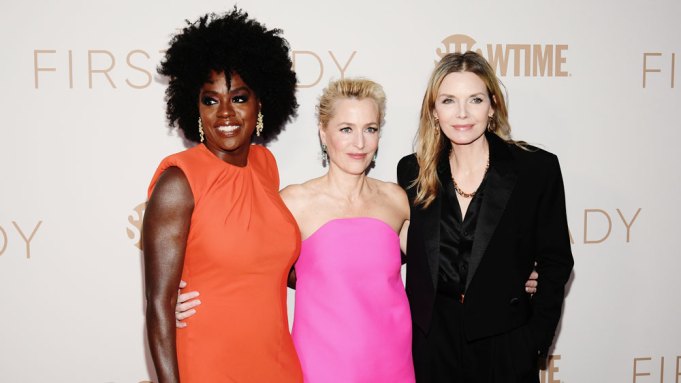 Michelle Pfeiffer didn’t know much about Betty Ford before she signed on to play her in the new Showtime anthology series “The First Lady.”

“I really only knew about, of course, the Betty Ford Center, which is I think what she’s the most famous for,” Pfeiffer told me at the show’s premiere on Thursday at the DGA building in Los Angeles. “And I knew that she came out and was open and transparent about her own issues with substance abuse and alcoholism, which was very, very taboo at the time. And she was discouraged from doing so. And she came out and spoke candidly and transparently about her breast cancer and about mental illness.”

Pfeiffer’s admiration for Ford grew while preparing for the role before transforming into the presidential spouse, who became first lady in 1974 when Gerald Ford was sworn in as president following Richard Nixon’s resignation amid the Watergate scandal.

She added, “When I got into it, I saw much there was to Betty … It was kind of daunting because, when you’re playing a real person, especially one who is so revered and historical, you want to honor them in the best way that you can.”

Pfeiffer and her co-stars also shared some of the more challenging work they faced for their portrayals.

“She had this kind of odd speech pattern,” Pfeiffer said of Ford. “It was a couple of different regions kind of mixed together. It was Midwest with a little bit of southern in there. I was like where is that ‘a’ coming from?”

Viola Davis says she had to master Michelle Obama's walk to play her in #TheFirstLady: "She walks like a boss." https://t.co/Tc2IrGqhHn pic.twitter.com/A1v6VX0yvJ

Viola Davis says becoming Michelle Obama was about stepping into her shoes. “She walks like a boss,” Davis said, laughing.

Davis is also a producer on the series. “During the pandemic, I was like, I’m ready to jump out of a plane,” she said. “I’m ready to do something that wakes me up, good or bad. And sometimes you need that to rediscover your passion for the work again.”

With Davis’ memoir, “Finding Me,” coming out on April 26, I asked if she had plans to adapt her life story into a feature. While nothing is in the works yet, the Oscar-winner said, “Whoever plays Viola Davis is yet to be discovered. She’s gotta be a little chocolate girl.”

Gillian Anderson on wearing teeth prosthetics in #TheFirstLady: "Eventually they were whittled down to something that felt remotely human." https://t.co/Tc2IrGqhHn pic.twitter.com/y9v5F6gNiF

Gillian Anderson also needed to nail a specific dialect while playing Eleanor Roosevelt. “It was so unpredictable because she grew up in England and in the U.S.,” she told me. “Eleanor had certain words that they just wouldn’t normally be spoken in her particular way if she hadn’t grown up in the U.K. … It was getting used to those specificities.”

It was also the first time Anderson used fake teeth. She tried several different versions created by London-based Fangs FX. “Sometimes they’d look completely ludicrous and eventually they were whittled down into something that felt remotely human,” she said.