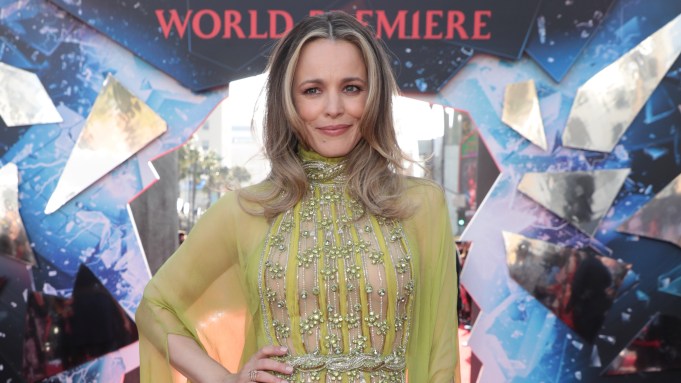 It’d been six years since Rachel McAdams scrubbed into the Marvel Cinematic Universe as Dr. Christine Palmer, the will they-or-won’t they love interest of Benedict Cumberbatch’s title hero “Doctor Strange.” But while Cumberbatch went on to join the Avengers in their fight against Thanos in the Infinity Saga, McAdams has been MIA since 2016.

In 2021, though, the Oscar-nominee reprised her role as Christine for the heart wrenching Doctor Strange-centric episode of “What If?” on Disney Plus, but that was a voiceover role. McAdams still seemed like a no-go for the live action sequel. In fact, when Variety reported that Sam Raimi would take over for Scott Derrickson as the director on “Multiverse of Madness,” McAdams was not expected to return.

“Well, I mean, to get to work with Sam,” McAdams said, explaining what sealed the deal for her in an interview with Variety ahead of the movie’s release.

“And I said, ‘Sam, I’m pregnant. Is that okay?’ But of course, he can’t say it’s not,” she added, with a laugh. “He was like, ‘This is great. Let’s do it.’ And I’ve got lots of exciting ideas for Christine and her evolution. He took me through the whole journey and it just sounded really fun and thoughtful and I was excited to come back.”

In “Doctor Strange in the Multiverse of Madness,” Dr. Palmer has traded her scrubs for a wedding gown and McAdams is also seen traveling the multiverse with Strange and newcomer America Chavez (Xochitl Gomez) while sporting a cool spandex suit and a different hairdo. In the interview below, McAdams shares why she relished getting back into the action.

Thank you. It feels great to be back.

It’s been years since we last saw Dr. Christine Palmer. What kind of backstory did you write up for her? What was your imagination of what she’s been doing all this time?

Oh, well, times have been tough after that blip. A little bit of work on that. But she’s found love and things are really turning around. It’s been a big, big five years.

Did she meet him on the apps? I was trying to write the love story.

Well, his job kept changing. So my backstory had a hard time keeping up. He was a pediatrician, and then he was a teacher, and I can’t remember where we landed in the end, but I just assumed [they met at] a bar in New York.

Perfect. I mean, why not? They met over a nice glass of red wine.

Yeah, you know, she just wants a normal life.

The superhero life is a lot. This time, Christine really gets to step into the multiverse and jump around in all of these visual effects. What was the most exciting part of that for you?

I love action. I love being physical. As an actor, I always feel like it gets me out of my head, and fun surprises come out of getting to just move. It was great to get to do that in this one a little bit more. And to wear a cool outfit. I was in scrubs last time — which were super comfortable; I’m not complaining at all. And I did miss them, but it was fun to be really just decked out. I got new hair and I get to wear really hot pink lipstick. All those things that I love, as an actress, to get to do in my job.

The things that make you feel like a superhero.

Yeah, it was fun. It was fantastical and dreamy and all that counts.

I loved “WandaVision”— what a ride! At first, I was like, “What’s happening? I don’t know who I am right now.” And then it just paid off. It was so great and [Elizabeth Olsen] was just phenomenal. And I loved it. So that was a fun thing to do, stuck at home.

It was a really fun experience as viewers to watch it as a kind of internet family.

It definitely got me excited to go to work everyday because I was watching “WandaVision” while we were shooting this, so it was great to come to work and like geek out on Liz and be like, “Wow, that looks so hard. What was that like?” We all would come to work and talk about it, so that was kind of fun and sort of meta.

Aside from the VFX work, what were you most excited about exploring with Christine and that relationship with Stephen? He has to literally watch her walk down the aisle and move on!

Yes, yes. It’s in keeping with their relationship from the first one, which is just complicated. And I think they’ll just love each other forever into every universe, but it’s never easy with them.

Since you are back, I have to ask about the prospect of continuing in the MCU. Is that something that you’re interested in and excited about when it comes to where Christine could go from here?

I mean, it’s a great gig. So I wouldn’t be sad to keep going with it. It’s a fun part. And I liked that she’s gone in different directions now. And now that the multiverse is open, you know, anything could happen. The world’s your oyster.

“Doctor Strange in the Multiverse of Madness” is now in theaters.