TV Academy’s Black History Month Panelists on the Importance of Lifting Each Other Up: ‘It’s on Us, Too’ 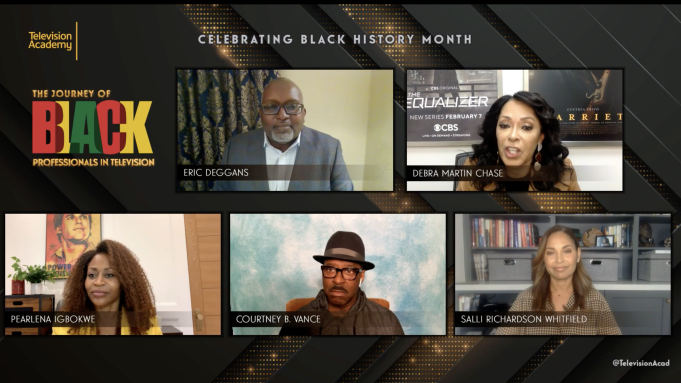 As chairman of the Universal Studio Group, Pearlena Igbokwe is the first Black woman to run a major television studio. But when she got her start, she had no connections in the entertainment industry, little information about how to break into the business and very few mentors to look up too. One of her first, and biggest, inspirations was Debra Martin Chase, one of the executive producers behind the beloved Brandy-led adaptation of “Cinderella.”

“When I first got into the business, one of the people that I saw as a role model of what I could be was Debra Martin Chase,” Igbokwe said Thursday on a virtual panel hosted by the Television Academy. “She was fabulous and fierce and running things back then and I just remember seeing her — and being too scared to go talk to her — but just thinking ‘Wow, okay there’s one person, and if she could do it, then maybe there’s a path for me.'”

Today, Igbokwe calls Chase a colleague. “I always say that the fact that we get to work together now is such a privilege for me,” she noted, alluding to “The Equalizer,” which Universal Television produces in association with CBS TV Studio and Chase executive produces.

The two trailblazers were joined by “The Gilded Age” executive producer and director Salli Richardson Whitfield and two-time Emmy-winning actor and SAG-AFTRA Foundation president Courtney B. Vance for “The Journey of Black Professionals in Television,” a panel organized by the Television Academy, in participation with the African American Film Critics Association. The virtual event began with a sizzle reel highlighting notable titles in Black television history, from “Soul Train” and “The Jeffersons” to more modern shows such as “A Different World,” “Insecure,” “How to Get Away With Murder” and “Abbott Elementary.” Then, in a conversation moderated by NPR television critic Eric Deggans, the group discussed how they began their careers, shared advice for people starting out in the business and discussed the TV industry’s progress (or lack thereof) in terms of opportunities for Black creators and producers.

Chase sad that while she has seen progress and change happen over the course of her career, it has happened extremely slowly, and largely in the past few years. “The Equalizer,” which features Queen Latifah in the lead role, is one of only five network shows in history to star a Black woman. Many of the others have only debuted in the last decade, like “Scandal,” which starred Kerry Washington and “How to Get Away With Murder,” led by Viola Davis.

“It wasn’t so long ago that you could look at any hour-long show on network TV and there were no writers of color in the room,” Chase said. “Black writers could not get on a ‘white’ show. Black directors could not work on a ‘white’ show, on a mainstream show. Actors of color were like the next door neighbor, the friend, the background character. Our stories weren’t being told.”

Vance agreed with Chase’s assessment that Black creators have more opportunities than they once did, but he also shared his concern that this progress could be temporary and in-roads made for Black people in the industry could be erased. Vance pointed to award shows as an example of how progress isn’t necessarily linear, noting how one year the awards can be historically diverse and the very next could be a “whiteout.”

“It’s on us too, as the industry has improved itself in terms of the leadership, to bring more folks in, so this is not a phase. We get other people in who get the experience.”

The panelists all agreed that in order for change to happen permanently, there need to be Black people in charge at studios and networks, making decisions about programming and who is in behind it. The group also discussed the importance of mentorship towards younger, untested talents from diverse backgrounds in order to ensure Black people continue to receive ample opportunities and success in entertainment.

When asked to share advice for young people starting out, Whitfield talked about how important building connections was when she transitioned from acting to directing television. Although she had limited directing experience, keeping up with her connections from her time as an actor helped her find jobs and advance her career quickly.

“Foster every relationship that you make along the way,” Whitfield urged. “Those relationships matter. Thanking people matters. … People who gave me opportunities in the beginning, I still send them emails and say ‘Hey, because of you this, this and this happened.’ It’s really important, because it comes full circle.”