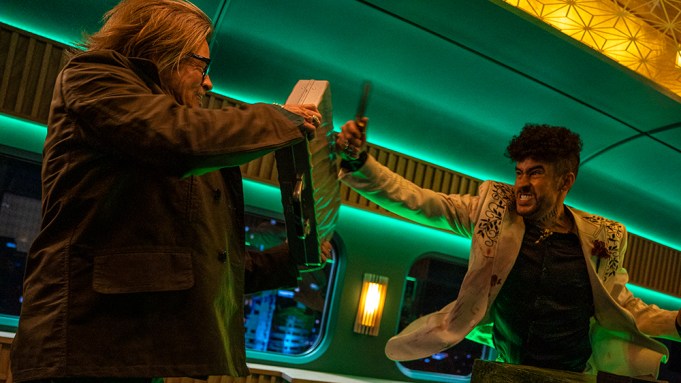 “I think I can, I think I can… be the top movie at the box office,” says Sony’s original action movie that could.

The Brad Pitt vehicle “Bullet Train” should take No. 1 on domestic charts. The film earned $12.6 million from 4,357 locations on Friday and is projecting a $30 million opening. It’s a solid performance for an original film with no franchise ties or multiverse shenanigans, but the film will have to keep chugging through August to recoup its $90 million production budget.

“Bullet Train” is seen as somewhat of a check-up on the type of film that audiences will mobilize to theaters for. The R-rated action flick will skew toward adult men — the most reliable demographic in terms of consistent theater attendance since COVID-19 lockdowns eased. However, with a marketing campaign that touts a colorful cast of characters instead of any known intellectual property, “Bullet Train” isn’t a surefire hit.

“Bullet Train” has earned a lukewarm response from critics, landing a 41% approval rating from top critics on review-aggregation website Rotten Tomatoes. Variety chief film critic Peter Debruge was mixed on the film, writing that it is “trying [its] darnedest to channel the likes of Tarantino and Ritchie, even if the dialogue and mock-British accents aren’t nearly strong enough to earn such comparisons.”

Audiences have been more receptive to “Bullet Train.” The filmed earned a “B+” grade through research firm Cinema Score, indicating solid approval among general moviegoers. With August’s slate looking pretty light on high-profile releases, “Bullet Train” should be able to take advantage of a quiet theatrical landscape in the weeks ahead. Paramount’s “The Lost City,” which starred “Bullet Train” bit players Sandra Bullock and Channing Tatum while featuring Pitt in a supporting role, also opened to $30 million this spring before eventually crossing $100 million domestically, showing that the public will still roll out for a crowdpleaser without franchise ties.

Directed by Pitt’s former stunt double David Leitch, who has since helmed actioners like “Atomic Blonde” and “Deadpool 2,” the film features the star as a hitman who accepts a simple mission aboard a high-speed train in Japan. However, he soon discovers that a crop of killers onboard have conflicting assignments of their own.

Meanwhile, Universal’s “Easter Sunday,” the weekend’s other new wide release, isn’t making much of an impression in its debut, grossing $2 million on Friday. The studio is projecting a muted $5 million debut from 3,175 locations for comedian Jo Koy’s comedy, which would land the film in eighth place on domestic charts.

“Easter Sunday” stars Koy as a struggling actor and father attending his dysfunctional Filipino American family’s Easter Sunday celebration. The comedy carries a modest price tag of $17 million before marketing and distribution costs, so Universal will cross its fingers for solid word-of-mouth and a month bereft of competing releases to help give the film some passable legs.

Warner Bros. release “DC League of Super-Pets” looks to take second. The film earned $3.35 million on Friday, marking a 64% drop from its opening day last week. The animated feature has been somewhat of an underperformer, especially for a film featuring iconography from DC Comics (even if it follows the Justice League’s furry friends). With the film’s current domestic gross standing at $38 million, “Super-Pets” still has a way to go to recoup a $90 million production budget.

Not helping things for “Super-Pets” is the continued success of Universal’s “Minions: The Rise of Gru,” which has remained a big hit with audiences since its debut over Fourth of July weekend. The “Despicable Me” spinoff looks to take fifth on domestic charts this weekend, dropping a slim 38% in its sixth weekend. The film’s domestic haul currently stands at an impressive $330 million.

Universal’s “Nope” looks to take bronze, projecting an $8 million haul for its third weekend. Jordan Peele’s sci-fi thriller should surpass a $100 million domestic gross sometime within the next week — a remarkable achievement for an original film primarily sold on its director’s name.

Disney’s “Thor: Love and Thunder” is eyeing fourth place, adding $2.2 million to its haul on Friday. The Marvel Cinematic Universe entry currently stands as the sixth-biggest domestic release of the year, pushing its domestic gross past $315 million this weekend.

Finally, it seems that “Top Gun: Maverick” may finally exit the domestic box office’s top five for the first time this weekend, though it’s in a close race for fifth with “The Rise of Gru.” Paramount’s runaway success is projecting another slim fall — only 21% down — in its eleventh weekend at the box office. With $657 million in the bank from North America, the Tom Cruise sequel will likely surpass the $659 million gross of “Titanic” today to become the seventh biggest film ever in the history of the domestic box office.