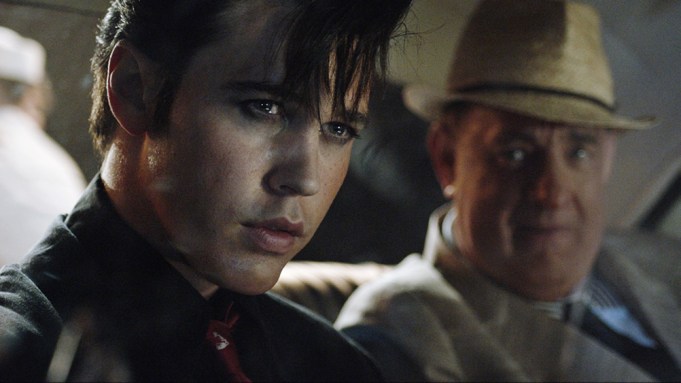 It’s a 20th century showdown at the box office this weekend, with the baby boomer epic “Elvis” contending against Gen X revamp “Top Gun: Maverick” for the top spot on domestic charts.

Director Baz Luhrmann’s biopic about the King of Rock and Roll is projected to draw $30 million from 3,906 theaters in its opening. It would be the second-strongest North American opening of the Aussie filmmaker’s career, coming in behind the $50 million debut of his 2013 adaptation “The Great Gatsby.” The film, which stars Austin Butler and Tom Hanks, could also mark the highest non-franchise domestic opening since the onset of COVID-19, potentially topping the $30.4 million debut of Paramount’s “The Lost City” earlier this spring.

It’s a solid start for “Elvis.” The Warner Bros. release has scored largely affectionate reviews from critics, with many highlighting star Butler’s breakout turn as Presley. Variety chief film critic Owen Gleiberman wrote that the actor “has bedroom eyes and cherubic lips and nails the king’s electrostatic moves,” though “his resemblance to Elvis never quite hits you in the solar plexus.” “Elvis” has drawn a favorable 68% approval aggregate from top critics on Rotten Tomatoes; audiences also seem to be receptive, with the film scoring an “A-” grade from research firm CinemaScore.

Those are two strong signs for “Elvis,” which will need to show some staying power in order to recoup its production budget of $85 million from domestic theaters. The film clocks in with a hefty runtime of 159 minutes — though that’s only 12 minutes longer than last week’s box office victor “Jurassic World Dominion.” Plus, as it documents the life of a mid-20th century icon, the biopic is expected to skewer older than a franchise play; 60% of the film’s audience has been reported to be older than 35 years old. Word-of-mouth becomes a key factor in determining the financial success of releases like “Elvis.”

Even with Luhrmann’s film drawing in a moderate opening, the biopic faces some steep competition for the No. 1 spot at the domestic box office, as “Jurassic World Dominion,” “Lightyear” and the summer box office’s tour de force, “Top Gun: Maverick,” all continue to draw audiences.

The horror film “The Black Phone” is also opening this weekend, after drawing in $3 million from previews on Thursday. Universal expects the Ethan Hawke vehicle to gross $23.25 million from 3,150 venues through Sunday.

“The Black Phone” has good chances of turning a profit with a budget of only $18 million before marketing and distribution — the abiding credo of Blumhouse Productions, the producer behind other “low-risk, high-reward” genre plays like “Get Out,” “Happy Death Day” and “Ma.” With critics and audiences both digging the movie — a 77% top critics aggregate on Rotten Tomatoes and a “B+” grade on CinemaScore — the horror film is off to an auspicious start.

“Top Gun: Maverick” refuses to back down from domestic charts. Some analysts project the Tom Cruise sequel, which was co-financed and coproduced by Skydance, will wind up with the No. 1 slot on domestic charts when all is said and done, and in its fifth weekend of release no less.

Paramount is projecting a $30 million haul for its follow-up to the 1986 “Top Gun,” marking a spectacular 33% decline from its previous outing. That would be the second-biggest fifth domestic weekend for a movie that debuted in wide release, coming in behind “Avatar,” which grossed an additional $42 million at this point in its run. “Maverick” will push its domestic gross past $520 million through Sunday as the film sets its sights on surpassing a $1 billion worldwide gross in the coming days.

“Jurassic World Dominion” looks to take bronze on domestic charts. Universal projects its dino-sequel should add $26 million in its third weekend of release, dropping 56% from its previous weekend. After stomping up a massive $143 million debut, “Dominion” has continued to hold relatively well. The film should expand its domestic gross beyond $300 million through Sunday, making it the fourth highest-grossing domestic release of the year behind “The Batman.”

Disney’s “Lightyear” will round out the top five. The animated spinoff drew $5.4 million in ticket sales on Friday, aiming to expand its domestic haul beyond $89 million through the weekend. The Pixar production has been somewhat of an underperformer, opening at No. 2 below “Jurassic World Dominion” last weekend. In the 21st century, all but four Pixar films have exceeded a domestic gross of $200 million. With “Lightyear” facing competition for family audiences from “Minions: The Rise of Gru” next weekend, the “Toy Story” spinoff may become the fifth release to fail to clear that benchmark.

Some analysts project “Lightyear” will gross $18 million over the weekend. However, if the film comes in above expectations, this weekend could mark the first time since 2016 that the top five films each gross above $20 million on domestic charts. Whether that happens or not, the diversity of well-performing options marks a notable victory for the movie theater industry after shuttering operations throughout the COVID-19 pandemic. Audiences across all ages, with interest in different kinds of movies, have returned to theaters.