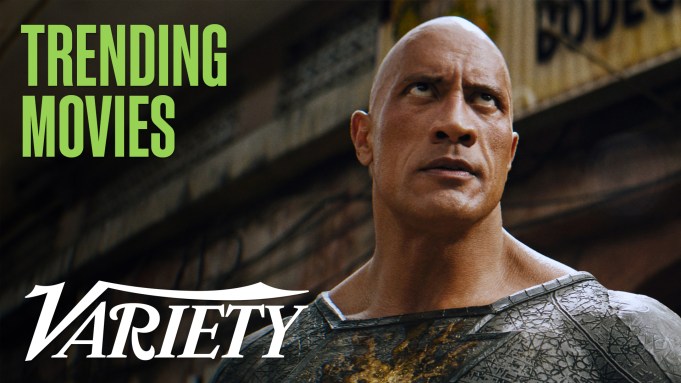 “Black Adam” was invulnerable with Twitter users in its streaming service debut on HBO Max this past weekend, landing at the top of Variety’s Trending movies chart, presented by Samsung, for the week of Dec. 12 to 18.

The Warner Bros. film generated nearly half-a-million engagements online with fans and critics alike. The streaming debut reignited conversations surrounding star Dwayne Johnson’s recent statements the film could be the first in a new franchise, despite reported theatrical losses. The future of many DC projects is currently unknown as the company re-strategizes under new co-chiefs James Gunn and Peter Safran.

Part of that strategy is the recasting of Superman, who makes an appearance during the end credits for “Black Adam.” This past week Gunn confirmed Henry Cavill will not reprise the role despite that cameo and recent reports.

The superhero chatter was enough to usurp the box office debut of James Cameron’s anticipated “Avatar” sequel, “Avatar: The Way of Water.” The 20th Century film dropped in theatres this past weekend, earning $134 million in its North American box office debut —  roughly $16 million less than initial expectations. That makes it the fifth-biggest opening of the year, tied with “The Batman.”

Overall “The Way of Water” earned just under 400,000 engagements on Twitter, as fans dissected the movie, speculated on the third and fourth installments, and shared The Weeknd’s new track, “Nothing Is Lost (You Give Me Strength),” which plays over the film’s credits.

Earning this week’s third spot on the chart was Netflix’s “Pinocchio,” which added another 325,000 engagements to the conversation. Many fans shared behind-the-scenes looks at the production of the stop-motion film, which filmmaker Guillermo Del Toro set in fascist Italy and based on the 1881 novel by Carlo Collodi, “The Adventures of Pinocchio.”

Flying into fourth place with another 119,000 engagements was “Top Gun: Maverick.” The film racked up a Golden Globe and Critics Choice Award nomination for Best Picture this past week, ahead of its Dec. 22 global streaming debut on Paramount Plus. To thank fans for catching the movie this year, star Tom Cruise shared a video of himself jumping out of an airplane while filming “Mission: Impossible — Dead Reckoning.”

Brendan Fraser’s controversial flick “The Whale” held steady in the fifth slot this week, earning an extra 110,000 engagements online — up 34% week-over-week. The Darren Aronofsky-directed film was part of the awards circuit conversation as Fraser earned a CCA and a Golden Globe nomination for best actor.

A24 also released a new trailer to promote the film’s nationwide theatrical release on Dec. 21, helping to fuel the overall chatter. Earlier this month the film scored the biggest opening weekend of the year for an arthouse movie, with ticket sales marking the highest per-theatre average of the year to-date ($60,000 per screen).

A trailer for Sony’s upcoming 2023 debut of “65” also helped that film enter the Twitter conversation this week with 95,000 engagements. The Adam Driver-led sci-fi hails from “A Quiet Place” writers Scott Beck and Bryan Woods, and features Driver as an astronaut who crash lands onto Earth to fight dinosaurs — 65 million years ago. The film debuts on March 10.

MGM’s cannibalistic offering “Bones and All” also entered the Top 10 this week with nearly 78,000 engagements. Some (in particular star Timothée Chalamet fans) felt the film was snubbed from the Golden Globes and CCA nominations this week, adding to the conversation. The horror-romance opened in theatres across the country on Nov. 23.

Rounding out the this week’s Top 10 is United Artists Releasing’s “A Good Person,” Apple TV’s “Emancipation,” and Warner Bros.’ “Elvis.”