Ncuti Gatwa, Daisy Ridley, Lily James and Eddie Redmayne were among the stars at BFI Luminous. 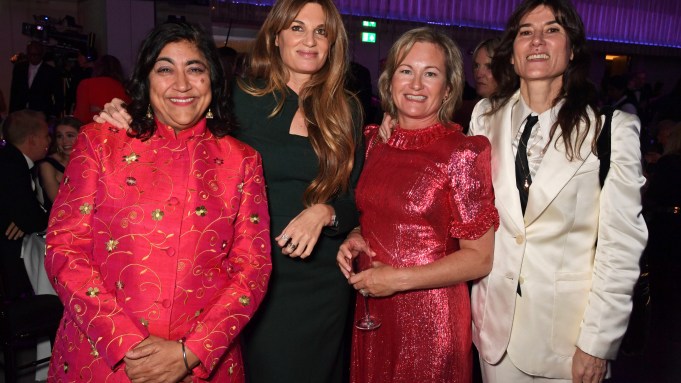 With a week to go before kicking off the London Film Festival, the British Film Institute gathered the U.K.’s titans of cinema to toast the return of moviegoing and celebrate the next generation of filmmakers.

The BFI’s Luminous gala took place at the swanky Londoner hotel in Leicester Square on Thursday evening (Sept. 29), where Variety had exclusive access. The event, which also featured the BFI and Chanel’s inaugural Filmmaker Awards, used to be a biannual bash, but was the first of its kind since the pandemic.

Tim Richards, chairman of the BFI and CEO of European cinema giant Vue Cinemas, kicked off proceedings with a rousing rally for movie theaters. “We’re back with a vengeance,” declared Richards. “The pandemic was very, very difficult, but the industry has survived and audiences are back, and at times, in record numbers.”

However, the affable Canadian executive, who will mark two years as chairman in February, also highlighted challenges for exhibition, such as the fact that 37% fewer movies are being released in 2022 than in 2019, as well as the 30% dip in box office. “Now, that’s not because of audiences; it’s because we desperately need movies,” said Richards, “and we need smaller films — those smaller British films and independent films.”

Also banging the drum for indie film was actor and self-described “BFI baby” Tilda Swinton, who — dressed head to toe in Chanel — said: “Years before the fashion of filling in forms to apply for funding by describing the many ways you were sure that your film would be a commercial success, it was the BFI who gave to film artists eager to experiment and push the form and grow new cinema audiences, support. Not for a specific, calculatable, profit-generating project, but for the development of that artist’s nascent and singular voice over several years.”

According to the award producers, the quartet were selected for their “creative audacity and their ambition to explore a new dynamic to their practice.” The awards are aimed at underrepresented voices in the industry.

Akoto, a former TV director for the BBC and Channel 4, told Variety that a desire to take an auteur path and work with different mediums and forms of moving image are “what led me to pivot away from TV into developing my own material and working with different forms like VR and AR and ultimately making art and gallery pieces.” He is currently developing his next feature film, “Etta and Lotus.”

Ferguson, meanwhile, premiered her first feature-length project “Nothing Compares” at Sundance in January. The film was acquired by cabler Showtime, where it will soon air. The filmmaker grew up in northern Ireland in the 1980s and ’90s, and became a “huge fan” of O’Connor’s as a teenager. “I became demoralized when I saw how she was treated when she spoke out. This made a huge dent on me as a young Irish teenager. This was a story I carried with me for many decades.”

“The Wolf Suit” helmer Firth, whose documentary aims to unpack conflicting accounts of her parents’ breakup, says everything she does is “really personal.”

“I use my own experiences,” says Frith, who lives in the highlands. “I’m interested in how we create stories and construct our sense of self through stories.”

Elsewhere, Saadati’s VR project focused on the partition of India in 1947, which created Pakistan. The Iranian-Romanian filmmaker, who describes himself as a multi-disciplinary artist, says the project unites “two survivors, one from each side of the border, taken back to their journey.”

What does “creative audacity,” the theme of the awards, mean to Saadati? “To me, every story that is going to be received has to have a piece of you, so being honest, not just with audience, but with the film — putting yourself out there takes a lot of courage,” he says.

The gala was followed by a lively fundraising auction for the BFI, as well as a live, two-minute performance by Pulp frontman Jarvis Cocker and his band. The event, which sent guests home with Chanel gift bags, was an ideal — and hopefully annual — harbinger for the London Film Festival, which is set to enjoy one of its strongest editions in recent years.

K.J. Yossman contributed to this report.