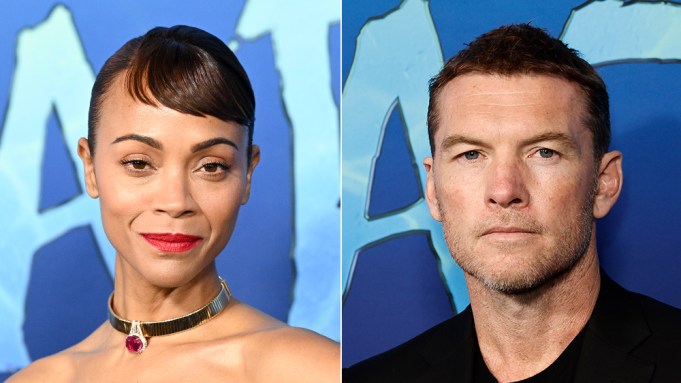 It was a Pandora family reunion at the Los Angeles premiere of “Avatar: The Way of Water” on Monday evening, though the film’s key patriarch was not able to attend. Director James Cameron, who spent 13 years developing, filming and designing the sci-fi sequel after his first “Avatar” became the highest-grossing film in history, had to bow out ahead of the festivities; he had tested positive for COVID-19.

Nonetheless, it was an emotional evening for the film’s cast and crew, as they gathered to celebrate reaching the finish line after a long journey. The franchise’s leading man, Sam Worthington, reflected on the years-long process of creating “The Way of Water.”

“We started work on it in, I think, 2015 was when I first saw things of it and 2017 was when we first started. It’s been a gradual continued process, like a big journey,” Sam Worthington told Variety’s Angelique Jackson on the carpet. “It’s a labor of love rather than making a movie. That’s what it feels like.”

Zoe Saldaña, who returns as Neytiri, the Na’vi warrior and wife to Worthington’s Jake Sully, also expressed her own gratitude for returning to the world of “Avatar,” highlighting her adoration for Cameron and the action heroines he helped cement with “The Terminator” and “Aliens.”

“I got to work with my idol at a very early stage of my career. If it wasn’t for Sarah Connor and Ellen Ripley, these iconic characters of the ’80s, where would I be?” Saldaña said. “There are so many themes that will resonate with people, starting with the power of family… Family is not just the one that you’re born into, but it’s also the one that you choose or chooses you.”

“The Way of Water” producer Jon Landau was glowing at the premiere, taking in the splashy ocean blue carpet and major waterfall installation, which transformed Hollywood Blvd. into Pandora’s waterworld and attracted the likes of Henry Cavill, H.E.R., Halle Bailey and Abel “The Weeknd” Tesfaye (whose sings the sequel’s theme, “Nothing is Lost”).

“I’m really proud of my crew. Jim and I might get accolades, but we’re standing on their shoulders. To see them recognized for their years of hard work makes me really proud,” Landau shared. “What has stood out are the tears… That’s what Jim reacted to the most. Two weeks ago, I screened the movie for our principal cast. When I saw them tearing up, I had to tear up.”

“It’s like a family reunion,” Landau continued, noting the 13-year gap between films. “It’s not that we were disconnected. We were just not seeing each other, but now we’re all back together. We just went into lockstep.”

A couple hours before the carpet began, Landau made headlines teasing that Saldaña’s Neytiri would head to Earth if Disney gives the green light to the planned “Avatar 4” and “Avatar 5.” About securing another potentially decade-long contract from the franchise’s returning stars — Worthington, Saldaña, Sigourney Weaver and Stephen Lang — Landau added: “Their commitment to this is remarkable, and I think what they love about it is that these movies have an ethos, they’re about something, and that’s why they’re a part of this.”

Weaver also took to the mic, reminiscing on her history with Cameron as she helped Landau amp up the crowd before the screening began.

“I’ve worked with Jim since 30-something years ago — when I was 12,” she cracked. “Honestly, it’s such an amazing experience to work with him. Some people call him brilliant. I think he’s a genius. And you are in such good hands tonight. You will go on a journey like no other. It was an adventure to make, it sure as hell is an adventure to experience.”

“Avatar: The Way of Water” debuts in theaters this Friday.