‘Ant-Man and the Wasp: Quantumania’ Reveals MODOK and Kang the Conquerer in Comic-Con First Look 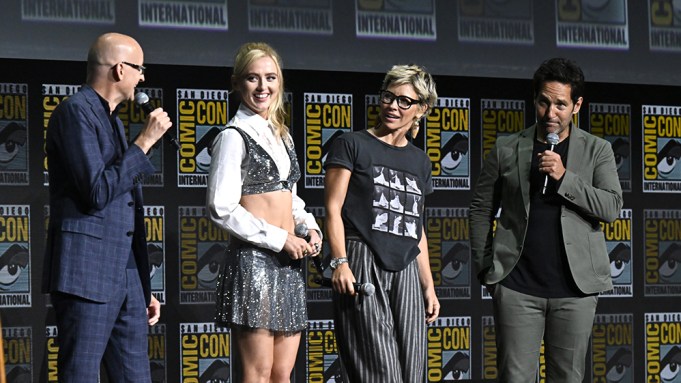 “Ant-Man and the Wasp: Quantumania” showed off its first official look at Marvel Studios’ huge panel at San Diego Comic-Con, showcasing action inside the quantum realm of the Marvel Cinematic Universe.

Director Peyton Reed and stars Paul Rudd, Evangeline Lilly and Kathryn Newton appeared onstage to help unveil the footage, with Rudd teasing where his hero, Scott Lang, is at after the seismic events of 2019’s “Avengers: Endgame.”

“Scott is pretty pleased with himself in his role with saving the universe,” Rudd told the cheering crowd. “Scott’s been busy at work–ish. With a little book. And I don’t know what else I’m supposed to say!”

“The second film is all about how powerful she is,” Lilly said, offering a tease of where Hope van Dyne is at now. “This one is about her vulnerabilities.”

The group then stood aside to showcase a bit of footage exclusive to Comic-Con attendees, involving first looks of Bill Murray’s character in the film, Jonathan Majors’ villain Kang the Conquerer and the briefest shot of MODOK, the bigheaded cybernetic villain from Marvel Comics, making his live-action MCU debut. MODOK did not speak in the trailer, giving fans little hint as to who could be playing the mutagenic monster.

“You’re an interesting man, Scott Lang,” Majors’ villain says in the trailer. “You’ve lost a lot of time. But time, it isn’t what you think.”

Marvel star and ageless Hollywood wonder Rudd returns for his third “Ant-Man” movie alongside Lilly as Hope van Dyne, a.k.a. the Wasp. Michael Douglas and Michelle Pfeiffer also return as inventor Hank Pym and Hope van Dyne, who was rescued from the quantum realm in 2018’s “Ant-Man and the Wasp.”

The last time we saw Majors in the MCU, he was playing He Who Remains in the Season 1 finale of “Loki” on Disney+. He Who Remains was a variant of Kang from an alternate timeline, who was revealed as the creator of the Time Variance Authority from “Loki” and the last remaining person at the Citadel at the End of Time. However, Sylvie (Sophia Di Martino) kills He Who Remains, unleashing multiversal chaos and inviting the wrath of other variants of He Who Remains and Kang.

Newton, who’s starred in “Big Little Lies” and movies like “Freaky” and “Pokemon Detective Pikachu,” is taking over the aged-up role of Cassie Lang. After the time jump in “Avengers: Endgame,” Scott Lang discovers that his little daughter Cassie, played by Abby Ryder Fortson in the first two movies, grew up without him and became a teen, played by Emma Fuhrmann. Now, Newton has her own purple Ant-Man suit and looks ready to take on her superhero alter-egos of either Stature or Stinger from the comics.

“Cassie is becoming who she’s supposed to be,” Newton told the Comic-Con crowd. “And I don’t want to say anything else.”

Peyton Reed directs “Ant-Man and the Wasp: Quantumania,” making him the second director to helm a trilogy of films in the MCU, outside of Jon Watts’ “Spider-Man” films. James Gunn will follow, completing his series with “Guardians of the Galaxy Vol. 3” next summer.