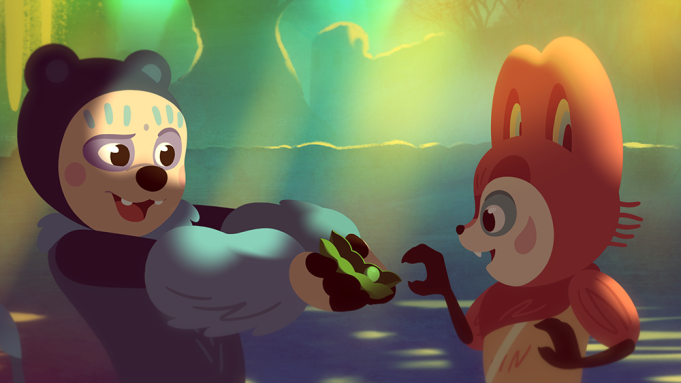 “Perlimps,” Brazilian Alê Abreu’s follow-up to the Oscar-nominated “The Boy and the World,” has a trailer, released in the run up to the animated feature’s world premiere on June 16 at the Annecy Festival.

Shared in exclusivity with Variety by the film’s sales agent Best Friend Forever, the full trailer reveals for the first time the real significance of the titular Perlimps, while showcasing its dazzling visuals.

The film will screen at Annecy in official selection as a special event. If it were in competition, it would be a contender to deliver Brazil its third Annecy Cristal best feature award in decade after Abreu won in 2014 with “The Boy and the World” and “Perlimps” producer Luiz Bolgnesi also won he same award a year earlier for “Rio 2096: A Story and Love and Fury.”

The trailer to the animated family tale begins with Claé bounding through an Enchanted Forest announcing excitedly that the Giants have surrounded it and there’s no time to lose. A terrible war is imminent.

He soon meets Bruô, a young bear. Secret agents from the Kingdoms of the Sun and Moon, the pair’s initial hostility takes up much of the trailer dialog. “We can have anything we want in the Kingdom of Sun!” says Claé. “Nobody can trick a bear from the Kingdom of Moon!” boasts Bruô.

But they soon join forces in a mission to  find the Perlimps, mysterious creatures who can ultimately find a way to peace.

“The Moon queen told me that when the Perlimps come together. They are able to create the most powerful energy of all. And only their power can stop the Giants. Only the Perlimps can save the forest,” says Bruô.

Bruô and Claé’s first enmity relates to the political tension that exists in Brazil (and the world) and grows with each day, Abreu has said, “They have to understand that dialog, empathy and the union of differences will bring te strength they seek,” he has said.

As its plot advances, any viewer of the trailer will marvel at its visuals: Scenes of stunning beauty, delicately but precisely drawn central figures standing out against deep, tropical-hued impressionist backgrounds.

The film’s backgrounds were created from color stains Abreu made with acrylic paint. These very loose and multicolored paintings were later retouched digitally, integrating the digital characters.

Forest scenes use a multicolor spectrum with all the colors of the rainbow. Often the entire chromatic circle is used in the same scene. “It’s an idea that transports me to the ludic and extremely free universe of childhood,”Abreu told Variety last year.

Written and directed by Abreu, “Perlimps,” Abreu’s third feature is produced by Buriti Filmes, the Sao Paulo-based production house of film directors Lais Bodansky (“Just Like Our Parents”) and Bolognesi (“The Last Forest”) and by producer Ernesto Soto (“Joaquim”).