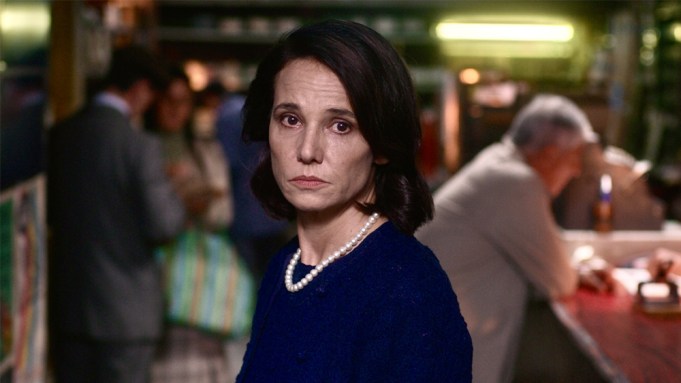 Paris-based Luxbox has shared in exclusivity with Variety a first trailer for Manuela Martelli’s “1976,” one of Chile – and indeed Latin America’s – most anticipated feature debuts of the year which world premieres at Cannes’ Directors’ Fortnight.

“1976” is produced by two of Chile’s most go-ahead outfits – Cinestación headed by director-producer Domingo Sotomayor (“Too Late to Die Young”) and Wood Productions, founded by Andrés Wood whose “Machuca” starred both Martelli and Aline Kuppenheim, the absolute protagonist of “1976.”

The film is set, as its title implies, in 1976, one of the bloodiest years of Augusto Pinochet’s hugely bloody dictatorship. It tells, as can be seen in the trailer. Kuppenheim plays Carmen, the wife of a Santiago de Chile doctor who heads off to her beach house to supervise its renovation during the holidays.

Carmen has all the accoutrements of a well-heeled middle-class wife and mother, sporting in the trailer a pearl necklace, cashmere coast and stylish shoes. She also suffers the subjugation of her gender and conservative class, being treated as a wall-flower.

“Mama’s becomes a literature teacher,” her daughter ironizes about Carmen’s reading short stories to blind villagers, as if Carmen’s having any kind of work is a joke.

Yet, as Carmen is deciding whether sunset pick could be a good color for a wall, Pinochet is throwing chained Chileans into the ocean.

Appealing to Carmen’s Christian conscience – “he’s like a starving Christ,” he says in the trailer – the local priest appeals to her to help cure a young man who’s escaped from jail. Or so he says. And Carmen’s life and sense of identity changes for ever.

That’s immediately apparent in the trailer. This is a period piece about the daily life of a leisured mother. Yet it is scored with ‘70s synthesisers anticipating horror. The jarring music also underscores a sense of dissonance between Carmen’s public persona and private self as she awakes to the contemporary reality of Chile.

If the trailer is anything to go by, more genre tropes seep into the film. There’s an echo of French “polar” crime thrillers – think Jean-Pierre Melville – in Carmen’s endless car journeys, the shot of a car in the woods and the story of a principled outsider battling far larger odds, but rarely portraying their feelings, as the films builds, one senses, to a grim reckoning.

Martelli also multiplies signs of entrapment – in-frame framing, Carmen’s image caught in a mirror, the goldfish in a plastic bag, the heavy period decor – to catch a character who glimpses a new freedom – and ethical actionability – beyond the cloistered life of a woman of her class.

“1976” looks like a pioneering attempt to relate what Pinochet’s dictatorship did to people from the post of view of a woman. As an actor, Martelli turned in spirited performances in “Machuca” and “Il Futuro.” If the trailer is anything to go by, this is the debut of a full-fledged director.

The film is produced by Omar Zúñiga (“The Strong Ones”) and Sotomayor and Alejandra Garcia and Andrés Wood at Wood Productions (“Violeta Went to Heaven,” “Spider”) and co-produced by Nathalia Videla Peña and Juan Pablo Gugliotta at Argentina’s Magma Cine.

“1976” swept three prizes on April 1 at the Toulouse Latin American Festival’s Films in Progress. These included the pix-in-post competition’s Grand Prix and Cine Plus Award from French pay TV giant Canal Plus.  It has sold to Dulac Distribution for France.

On the cusp of Cannes, Martelli fielded three questions on the trailer:

“1976” is set in maybe the bloodiest year of Augusto Pinochet’s  murderous dictatorship but looks like one of the very first films to portray the period from the point of view of a woman….

Right, for me it’s an act of justice for those anonymous women who never appeared in my history school books. It all started when I asked myself about my maternal grandmother whom I never met. I wanted to revisit the year she died from the inside of a house. I felt that she was a victim of that bloodiest year and I wanted to give her and other women one space to exist.

What’s so notable form the trailer is its score, which creates a sense of both dissonance and horror. I sense that in the film it that will say something about both Carmen’s feelings and the period itself. But maybe I’m wrong.

No, you are right. That is, in fact, the equation of the score. The music in the trailer is inspired by the music that Mariá Portugal composed for the film. With Mariá we wanted to take a different route from the symphonic music you usually expect from period films’ scores. I felt we needed something to reflect the rarified space that Carmen, the protagonist enters into, and the way she feels, and this is how we started looking for ‘70s synthesisers.

Genre seeps into the film as well in echoes of French crime thrillers, Jean-Pierre Melville, for example, and the sense of a morally principled protagonist fighting more powerful forces. Could you comment?

I think that “seeps” is a very precise word to describe the relation of the film with genre, because I think that everything that happens in the film has to do with seeping. The horror of the period is too harsh to be contained by the protagonist house’s walls, so then when it touches her, everything sounds, looks and feels distorted. The film itself is affected by this filtration, and its codes are distorted as well.