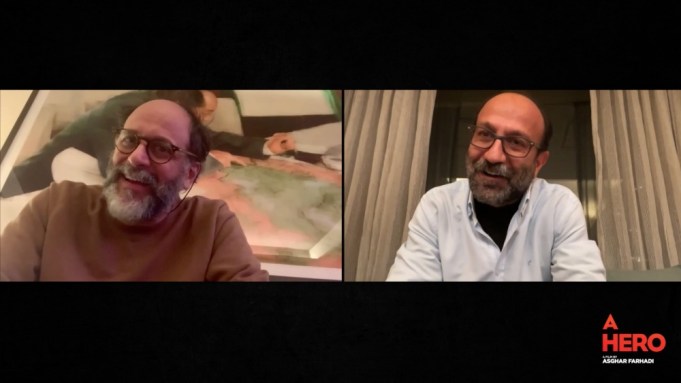 Asghar Farhadi and Luca Guadagnino had never met before Amazon Studios brought the two directors together for an online conversation. The topic was Farhadi’s drama “A Hero,” which is Iran’s candidate at the upcoming Academy Awards in the Best International Feature Film category.

Yet they seem so symbiotic — and also, uncannily, look physically similar — as they chat about “A Hero,” which is about an earnest-looking man named Rahim who while on furlough after being imprisoned for debt returns a lost handbag full of gold coins. An act which appears to make him a Good Samaritan. But the story is more complicated.

“We cannot doubt that our Rahim is a hero, but at the same time his fate is not that of a hero. Ambiguity plays a very large significant role – in your movies, and in this one specifically,” says Guadagnino.

Farhadi points out that he tried “in this film and in my previous ones to do a mix between drama and ordinary life,” just like what Vittorio De Sica and Federico Fellini did “in the golden age of Italian cinema.”

“A Hero,” which saw Farhadi return to shooting in Iran after his Spanish-language “Everybody Knows,” launched positively last July from the Cannes Film Festival where it tied for the Grand Prix, the fest’s runner-up prize. The pic was released in U.S. theaters on Jan. 7 ahead of its online launch on Amazon Prime Video on Jan. 21.

Here are edited excerpts to the conversation to which Variety has been given exclusive access.

Guadagnino: I love your movies Asghar, I think you are a master, and I am very proud to be here discussing with you your latest wonderful movie. The thing that immediately struck me is the fact that “A Hero” finds its own suspensefulness in the scenario of Shiraz. Because Shiraz is an archeological city and because there is a lot to deal with findings in this movie. You find a wonderful metaphor and a wonderful backdrop in the place where you set up the stories of these beautiful characters. Can you give us a little context?

Farhadi: Thank you Luca, I am very happy to talk to you and I love your films. “Call me By Your Name,” I love this film. As you know this city is a very historical city, a city very different from Tehran. Still, it’s a kind and calm city, a bit like the south of Italy – where people have families and have very good relationships. When you have problems in that kind of city, the family gathers to find solutions to your problems. This helped me to make these kinds of relationships between families. That’s the first thing.

The second thing is a kind of nostalgia towards this city. The background and the history of this place is nostalgic today. A lot of Iranian big names they came to settle there – very famous and important historical people. For this reason, I decided to make a film there. I thought: ‘If I make this film in Tehran, there would not be a background for this story.’ When I talk about nostalgia for the history of the city, I mean that there are a lot of heroes coming from there. And this links to the story of ‘A Hero.’ On the other hand, when you have a problem in these cities, people don’t react like: ‘Then it’s your problem.’ It’s more like: ‘This is our problem,’ and they gather to find a solution.

Guadagnino: This is immediately clear from the very beginning of your film. There is something quite striking about the imposing landscape from which we start to know Rahim and the very domesticity with which they work and live within this archeological site. In a way you give us immediately that sense of solidarity, but at the same time through the idea of archeology you introduce us to a larger theme of the film: where could we find the truth? What is the truth in the behavior of every individual? We cannot doubt that our Rahim is a hero, but at the same time his fate is not that of a hero. Ambiguity plays a very large significant role – in your movies and in this one in specific – for me this is because ambiguity is what life is. Throughout all the great sublime construction of your film, we are getting a sense of life itself. Can you tell us the secret for your capacity of bringing ambiguity and at the same time suspenseful iconicity to your images?

Farhadi: You know, “A Hero” is a kind of very ordinary story. There is no big twist, no killings. It’s a very ordinary story about ordinary people. But the problem when we are writing a story about ordinary life is that there is no drama. It’s very boring when you have an event from which you cannot make a drama. I try in this film and in my previous one to do a mix between drama and ordinary life. When I talk about Rahim and his family, all of them are very ordinary people and putting a drama in this kind of life is always a paradox. When we see ordinary life films, they can be very boring. On the other hand, in big dramas you can find no ordinary life. I try to mix these themes. When we see ordinary life as a base of the story, you don’t have layers. So you should try to put something to make layers on your story. For example, that first scene where Rahim comes out of jail and goes to that place it gives you a window. It opens a window to the audience to see more layers in the story. I try to make these kinds of films, very close to life but not empty of drama. I try more because there is a way to reach this goal. Luca I can also say: in the golden age of Italian cinema, they did — De Sica, Fellini — they did this. Suddenly after that, this disappeared. Now, some directors are trying this again.