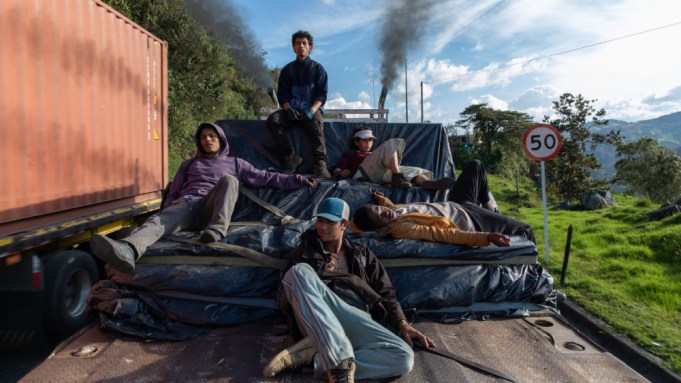 “Kings of the World” (“Los Reyes del Mundo”), by Colombia’s Laura Mora (“Killing Jesus,” “Frontera Verde”) has shared its trailer exclusively with Variety in advance of its world premiere in Spain’s San Sebastian festival and its Oct. 6 theatrical release in Colombia.

Said Mora: “We are very happy to finally be able to release the film! It has been a very long and demanding process…. And to premiere in the official competition of a festival like San Sebastián, surrounded by directors that we deeply admire, is an honor.”

Played by non-pros, “Kings of the World” follows five teens ranging from ages 12 to 19 who roam aimlessly through the streets of Medellin, Colombia. When Rá, the oldest in the gang, receives a letter from the government about the restitution of land that was seized from his grandmother by the paramilitary, he and his friends decide to make the trip with the hope and dream to finally find their place in the world.

The trailer tracks their journey to discovery as they leave Medellin and cross the mountain range. “They will travel this long road between the delirium, the energy, and the youth of those who embark on the adventure of their lives. The beauty of the landscape, and the encounters with other marginalized people who will welcome them, will be the prelude to a great feat,” the synopsis goes.

The mostly female-driven production is led by Cristina Gallego of Ciudad Lunar, producer of the Oscar-nominated “Embrace of the Serpent” and producer-director of 2018 Cannes Directors’ Fortnight hit “Birds of Passage,” along with Mirlanda Torres (“Manos sucias”), who leads the production company La Selva Cine, co-founded with Mora and Daniela Abad.

The seeds of the idea for “Kings of the World” were planted while casting for “Killing Jesus,” said Mora. “I realized that those more than 90 boys we interviewed all shared a terrible feeling of exclusion, a certainty of not having a future. However, almost like a deep and beautiful contradiction, they were full of life, sometimes delusional dreams, always linked to the same desire: an obsession with having a place in the world, literally and symbolically,” she mused.

“From there, questions arose that I have always asked myself about the violence tied to the possession of the land. The nerve center of the conflict in Colombia is precisely that: That of a people who have been dispossessed of their land by landowners, large elites and armed groups, who have formed the basis of an extremely unequal and painful society,” she added.