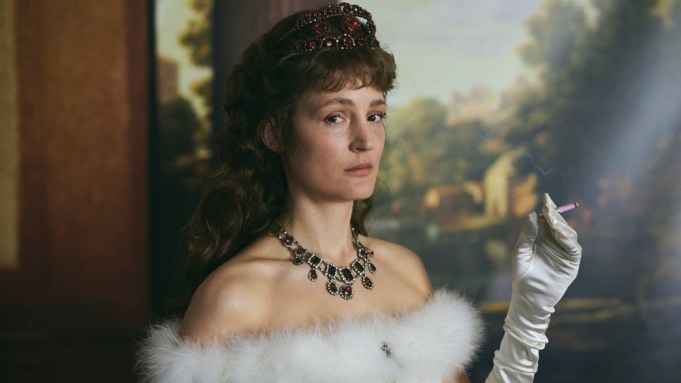 When filmmaker Marie Kreutzer was writing “Corsage,” which chronicles a critical period in the life of Empress Elisabeth of Austria, also known as “Sissi,” she had in mind the experience of other women in the public eye, in particular Princess Diana and Meghan Markle. In recent weeks, she has been mulling the treatment of Amber Heard as well.

“Corsage,” which world premiered recently at the Cannes Film Festival in Un Certain Regard, and has become one of the event’s hottest titles, starts in 1877 when Elisabeth – renowned for her beauty – is celebrating her 40th birthday. We see Sissi – played by Vicky Krieps – insisting that her corset is laced ever tighter, and restricting what she eats to make that so. It is a metaphor for how she is constrained by the expectations of society – limited to merely ceremonial duties, despite her intelligence, lust for life and rebellious spirit.

Kreutzer says one aspect of Sissi’s situation in that phase of her life relates to how older women are treated. The film shows her “struggling with her own image, and her growing old and not being able to be that young, beautiful empress that everybody wanted her to be,” Kreutzer says.

She adds: “She doesn’t have any power – the only power she has is over her body.” She draws a parallel with contemporary times when “women in rich countries, who will never have to starve, choose hunger in order to be thin and to look good.”

She continues: “I found it interesting that she so strongly wants to control her body image. It is something that we have to deal with all the time as women, especially today with social media. It is especially hard to handle for women who are seen by everybody – for well-known women – and especially Princess Diana and Meghan Markle.”

As an actress or a pop star “you are being watched all the time, but there’s a certain freedom in what you do. As a princess, an empress or queen, there are things that you have to get right.”

She continues: “While writing the script I bought a tabloid magazine just to read an article about Meghan Markle, because it resonated so much with what I was writing. I was never that interested in these stories before but from that moment on I’ve seen them differently.

“And right now, with the trial of Johnny Depp and Amber Heard, I think it’s very similar. Whatever she does or says in court is judged harshly. Everybody’s extremely judgmental about her, never about him. Women in the public eye can never really do the right thing. They’re never good enough.”

The obsession with the empress’ appearance is akin with the obsession with Instagram and celebrity culture. “It’s very poisonous and dangerous,” she says. “It’s related to how many women have anorexia, so I read books about anorexia, and talked to friends who have had this disease.”

In some respects, the way Sissi was treated is similar to the experience an actor has in the public realm, Krieps (the film’s executive producer, and the one who came up with the idea for it) says. “In the end, everyone just wants to have a life and be happy, and when you’re an actor, you add this thing called media. You do your job, but it is also seen by others, so you have to go to the premiere and present the film to the press. And it’s almost like a second part of your job you didn’t sign up for, but you have to stick with it.

“When you’re on the red carpet, you know these people look at you, but you don’t really want to be there – all you want to do is do your job, and then have a happy life like everyone else. But I also have to present the movie and then I have to smile and they shout at me on the red carpet: ‘Hey, Vicky, smile,’ which I always find so painful. It really hurts. It’s almost like an order; it doesn’t feel nice.

“Then you wear a dress from a designer, and they want it to be this way or that way. And although you’d like to wear flat shoes, they tell you with this dress you need high-heel shoes.

“So there’s a whole circus going on around me. I might not be wearing a crown, but I’m wearing enough other stuff. So the fantasy of maybe just falling down and fainting like she does [in the film] has been close to me many times. And just running to my hotel and ripping it all off. And so yes, that’s something I could relate to very well.”

Sissi is well-known to European audiences thanks to a film trilogy in which Romy Schneider plays the empress as a young, obedient monarch in a kitschy, folkloric-style setting. But for Krieps, the older Sissi was more intriguing, and someone who was “suffering.” “When you read her poems and read about her you connect with something totally different than anything that was in those movies,” she says. “Whatever it was, we will never know because she’s not around to tell us, but there was some kind of melancholy and sadness, and sense of being imprisoned, like some imprisonment of her soul.”

One of the takeaways from the film for Krieps is how people hold up a mask in public to hide their unhappiness. “It left me with the impression of what it would feel like to have depression. That is something we mostly don’t see. We should become more aware of and more open to our feelings. We all have had this feeling that although we are surrounded by a thousand people and are looked at, and maybe even applauded, some part of ourselves feels alone and not seen and not touched. And this is something we tend to push away in order to function. And so we don’t see it in others. [The film] could make people look at their spouse or their brother or whoever differently, and think of this mask they’re wearing, and this smile: Is it actually real or are they just holding it up for me or for work or for the family?”

Although there are uplifting aspects to the role, Krieps says it was a tough part to play. “Yeah, so the fun aspect, that’s really me. Like when I’m dancing and [wearing a fake] moustache… There are many things that I just had to do… It was also Vicky having to break out, because it was not fun. And to be honest with you, it was the hardest work I ever did. Because the corset was hurting me every day. At the end, I was crying when I knew I had to put it on.

“Every morning, I knew what I had to go through. So imagine it goes over two months or something. And by then your mind knows what was coming, once it sees the corset. It is really painful. And I don’t know if it makes any sense. I did it to represent some sort of imprisonment that women have known throughout the ages, and unfortunately it still looks really nice on me. I would have hoped it would look weird or crooked or something like that. You could see that it’s not healthy. It still looks beautiful because we have this idea of a woman in our heads. But doing it was really not nice. I hated it. And I will never do it again. Because of the corset, you cannot really act the way you want – you cannot move. So for my acting, it was really difficult. I had to really internalize everything and keep it all inside.”

Sissi cannot be judged by today’s standards, especially as a mother, Kreutzer says. We see her struggling to maintain a good relationship with her daughter and son, despite the tensions in her marriage.

“For me, it was important not to describe a family as it would be today, because the roles of a mother, a father and children were different then, especially in an emperor’s house. It was not expected for her to take care of her children – other people did. But she had an extremely close relationships with her children for that time,” Kreutzer says.

“When people read the script, they said: ‘She’s not a really good mother.’ And I said: ‘(a) I don’t care, but (b) that’s not true.’ For that time, she was an extremely caring mother. For the kind of society she lived in.”

The relationship between her and her children was “sometimes very close and sometimes extremely distant,” she says. At one point the relationship with her daughter shifts and the daughter behaves more like a mother. “She identifies more with the traditions [of Austrian society] and with what her father says.” Kreutzer read the daughter’s diaries. “She was really very interested in being the perfect Habsburger princess, and doing everything to please her father.”

When looking at the marriage between Sissi and her husband, Franz Josef, Kreutzer sought to avoid taking sides. She left it up to audience to come to their own conclusions. “For me, what I always like when I make a film is when people see what they see. I’m not telling you what to see. And it’s very interesting because two of my producers are married. She said: ‘He’s an asshole, the way he acts throughout the film.’ And he said, ‘No, I see him struggling with her. I see that he cannot make it up to her; he can’t make it right for her.’ That’s what I like – people can make their own assumptions and interpretations. That’s what I was trying to do.”

Franz Josef is seen to feel responsible for everybody working at the palace. “He always tried to be very modest. ‘I don’t need anything and I don’t need expensive stuff. I do it all for the people.’ I and the actor [Florian Teichtmeister] were talking a lot about this. We made him be very polite with the servants, and different to her. I tried to make it about her – it’s her story – but also to be just with him, and not just let him be the bad guy,” Kreutzer says.

Just as the empress feels she has passed her prime, the Austrian Empire too shows signs of decline. “That was what I tried to achieve with the set design – the carpets, the furniture, it’s worn out; it’s not chic. I tried to make everything really toned down. I always said to my production designer [Martin Reiter]: ‘Make it look as if the expensive furniture has already been sold.’ It’s like the end of an era,” Kreutzer says, adding that it reminded her of how things are now. Everyone thinks things will continue as they are, but the warning signs are there to see.