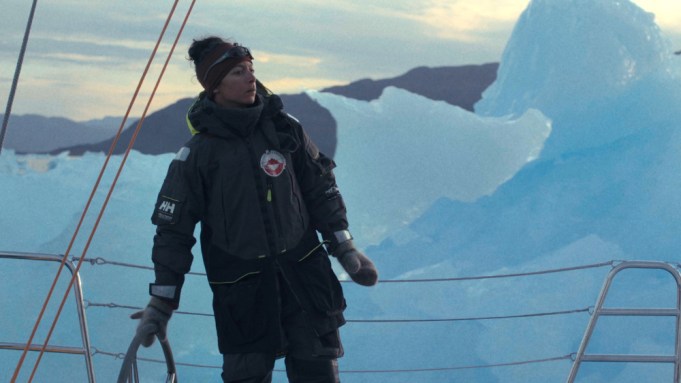 World premiering at the Cannes ACID showcase, “Polaris” explores the intimate relationship between two sisters, Hayat and Leila. The film, set between the isolated Northern Sea and warm, well-connected France, aims to bring a human perspective to this tale of sisterhood set against dramatic land- and seascapes.

Vera and Hayat met on the shoot of another Kossakovsky movie, “Aquarela,” during which the two fostered a bond, with Hayat serving on Kossakovsky and Vera’s sailors crew. Their relationship evolved as Vera followed Hayat back to France in order to film the sisters’ story.

Variety spoke with Vera ahead of “Polaris’” premiere at Cannes.

You worked with Hayat previously but how did this story come together?

It was a deep night in the middle of the ocean. Hayat was night-watching, and I decided to accompany her. We chatted all night and she shared something very painful with me: her sister was in jail and she was not emotionally prepared to visit her. She felt her sister was repeating her mum’s trajectory. When we arrived in Greenland and said “bye,” I knew that I would be accompanying her to France to meet her sister. The rest of the process was a mystery, but I guess the three of us needed to make this film.

How would you describe the transition the main characters suffer in your film?

When I met Hayat, she was unable to speak openly about her past. She was ashamed. Today she is a much more confident person, and she embraces her story. The film has helped her to articulate it.

Both protagonists are women, opening te door to a really interesting female perspective. How would you explain your role as a female director?

It is difficult for me to answer this question. When I wake up and walk down the street, I don’t ask myself how I walk like a female person. I am just me! I only know that at rentals they questioned my capacity to mount the camera on top of the mast and film from there. I was in shock because I knew it was an easy thing to do! Finally, I decided to hide that I was pregnant even from my mother. I travelled to Greenland, and one day, at 5 am, sitting 20m high in a harness, I was the happiest person on Earth while watching icebergs pass my frame. I sent a kiss to the rental house from there!

How did you approach the environment on the film?

Historically we, humans, behave as if we are the owners of Earth. It was clear to me from the beginning that I was in a territory that we have partially conquered as a species and that I should not be there. I filmed the landscape with great respect. For instance, Hayat has a big connection with whales. My first reaction was, let’s make a spectacular sequence with underwater cameras, and let’s film the skin of the whales very close. I wanted to make a mind-blowing scene! But soon I realized that it was a colonialist approach. Instead, every time we met a whale, we turned off the engine, we kept silent, and we let the whale decide what to do. There are no whales in the film and I am very happy about it!

There are many metaphors during the film, how did those become so important to the sisters’ story?

At times, documentary filmmaking can become a reality show, especially when you film human stories. I wanted the viewers to understand the soul of the two characters, to feel them intimately, but at the same time, I didn’t want to be obscene. Distance is the key. In this case, metaphors!

Spectators may feel they’re observing an intimate story. Can you explain how you achieved that point of view?

I wanted the viewer to feel Hayat and Leila directly. I gave each shot a certain distance, time, and space so the viewer could have a real human encounter with them. My role was to select the most relevant moments and film them at the right distance.

How did you use the camera as a narrative asset?

Documentary filmmaking is an art where aesthetics became ethics. I only moved the camera when there was a reason behind it. Most of the time there was no reason for movement so stillness was mandatory.

Silence helps mould “Polaris’” rhythm. How did you approach the post-production, and especially, how did you blend the sound into the narrative?

From the beginning, I wanted to bring the invisible visible into the film. The sound was the best alley for it! We didn’t want to be naturalistic, we wanted the sound to recreate Hayat’s mindset. Alexander Dudarev [sound editor] and Alexandre Widmer [sound mixer] are two poets. Give them some wind and they will transform it into an emotion. They are magicians! They knew when and how to create silence: perhaps the most difficult sound in a film.