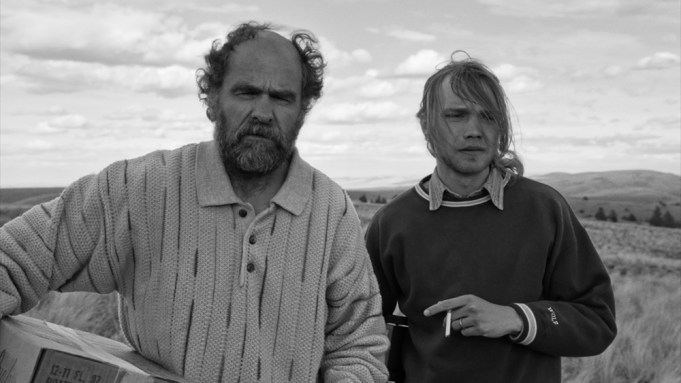 “A Perfect Day for Caribou,” which stars “Lean on Pete’s” Charlie Plummer, has debuted its trailer, ahead of its world premiere in Locarno Film Festival’s Concorso Cineasti del Presente.

In Jeff Rutherford’s feature debut, Plummer and Jeb Berrier play an estranged son and father, respectively, who spend the day ambling around a cemetery, wandering the wilderness, searching for family, and “stumbling through disharmony and heartache.”

The film is presented in 4:3 aspect ratio, shot in black and white by DoP Alfonso Herrera Salcedo, who has won several awards for his work, including the 2018 Kodak Cinematography Vision Award, the Golden Tadpole in the Student Competition at Camerimage in 2019 for “Lefty/Righty,” and the Bisato d’Oro for best cinematography at the Venice Film Festival in 2021 for Joaquín del Paso’s “The Hole in the Fence.”

“A Perfect Day for Caribou” tells the story of just one day in the life of Herman, Nate and Ralph. Herman (Berrier) is an alcoholic with a depleted appetite for life. Nate (Plummer) is an anxious young father reckoning with his past so he might move on with his life, and his son Ralph, a misunderstood child, off in his own world.

The film starts early one morning with Herman speaking into a tape recorder, dictating a final message to his estranged son, Nate. As he rambles on about the last caribou herd in North America, his cellphone rings – it’s Nate, all these years later. That afternoon, they meet up at a cemetery on the edge of an unknown town. Nate brings his own boy along, a six year old named Ralph, who carelessly plays and runs around in the distance as Herman and Nate stumble through 10 years worth of conversation.

Distracted by their own business, they don’t initially notice Ralph run off, out of sight. Eventually, they do, and they take off into the rural abyss in search of him. They navigate hills and valleys, forests and open plains. All the while, in an uneven and awkward pattern, they attempt to connect with one another. They have until nightfall to find Ralph, and for Herman, today might be his last. For Nate, it could be the start of a new beginning.

The film is produced by Kyra Bailey, Joseph Longo and Rutherford for Fred Senior Films.