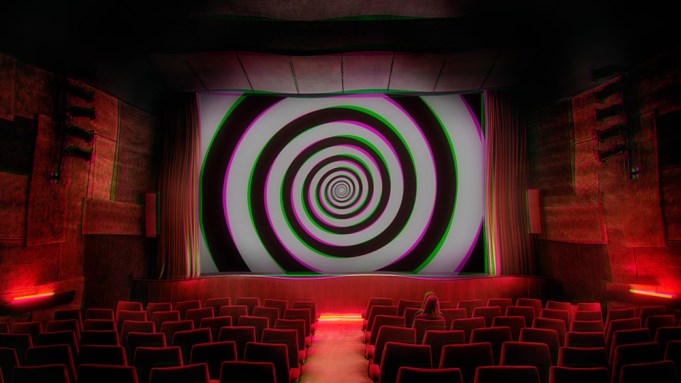 Before each film, a hypnotist will perform a mass hypnosis from the main stage at the Stora Teatern in Göteborg, the festival announced Tuesday. Transforming the audience’s state of mind in accordance with the mood and theme of the film, the hypnotist will break the hypnosis after each screening.

The Göteborg Festival has just released a promo trailer which dubs The Hypnotic Cinema a “mind-bending film experiment.” In the video, a be-suited hypnotist in front of a spiral vortex instructs a female audience member to “open your eyes.”

”Listen carefully,” “forget your troubles,” “let go of your stress,” “don’t be afraid,” “let us inside you,” “we are your new experiences” counsel other hypnotist figures as the camera trundles down what looks like a hotel corridor as a rabbit-masked individual lurks in the background channeling echoes of “The Shining” and “Donnie Darko.”

The woman is finally told to wake up. She finds herself sitting in a cinema, but whether her trance is really over is another matter. “Do you really dare to let go of control?” an end title asks.

Hypnosis involves focused attention, reducing peripheral awareness. Cinema theater film watching has a parallel effect, argues Göteborg Festival artistic director Jonas Holmberg. “Cinema theaters and hypnosis both emerged in the late 19th century. If you look at early cinema – Méliès, Griffith – it’s totally full of hypnosis. I don’t think this is a coincidence. There are very, very big similarities between being hypnotized and watching a film, especially in a cinema theater.”

The organizers of the 2022 Göteborg Film Festival are currently crossing fingers that they’ll be able to stage this year’s event as an in-person event at theaters, complemented by an online program of 50 films for those in Sweden who can’t make it to Göteborg.
In such a context, “we want to celebrate this filmic experience in movie theaters and also extend it by adding another layer of hypnosis,” Holmberg told Variety.

“Speak No Evil” turns on a Danish family which visits a Dutch couple it met on holiday. The trip becomes increasingly strange, even sinister. “The Hypnotic Cinema is about keeping the film viewing experience,” said Holmberg. “We wanted to see what happens when you go even further into the mode of spectatorship associated with a very well made and effective horror film.”

The Göteborg Festival runs Jan. 28-Feb. 6. Its full program will be announced Jan. 11.