Amanda Kramer’s ‘Give Me Pity!’ Bows Teaser Ahead of Rotterdam World Premiere (EXCLUSIVE) 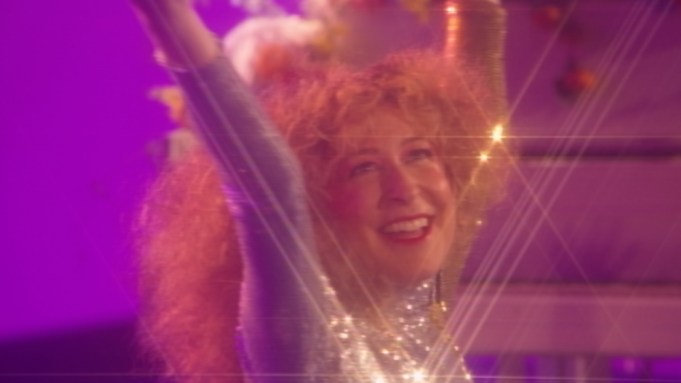 Amanda Kramer’s ‘Give Me Pity!’ starring Sophie von Haselberg, is bowing a teaser trailer ahead of its Rotterdam world premiere where the pic closes the event’s Filmmakers in Focus section on Jan. 29.

Variety nabbed an exclusive first look at the teaser, courtesy of Alief, which snapped up the global sales rights to the pic in early January.

Following its world premiere, the U.K.-French sales agent, distribution and production company will present the film at the Berlinale’s online European Film Market for its market debut in February.

“Give Me Pity!” pivots on Variety TV show host Sissy St. Claire, played by Von Haselberg, whose vanity, insecurity and delusions of grandeur come to a head as a menacing masked figure continues to haunt her, leading to a very public breakdown.

The one-minute teaser opens on Sissy St. Claire holding forth on stage against a glittery fuchsia backdrop as increasingly sinister images flash and perturb the 1980s vibe.

“While singing has always made me feel especially vulnerable, our concentrated shoot schedule left mercifully little room for second-guessing my performance, and Amanda’s extraordinary trust gave me license to take Sissy as far in any direction as I wanted,” said Von Haselberg, adding: “With that kind of freedom, I know I could relive this experience a hundred times and still find a thousand more facets of this wild, wonderful, tragic woman to explore.”

“The film is a celebration of and comment on diva culture which reached a bizarre height in the ‘70s and ‘80s and continues now with a vibrant/somewhat psychotic fervor,” said Kramer. “I’m interested in female vanity, created persona, the trope of the hysterical/maniacal woman.”

Kramer’s “Please, Baby Please,” starring Andrea Riseborough and Demi Moore, will open the festival on Jan. 20 where it world premieres. In recognition of Kramer as one of this year’s Filmmakers in Focus, Rotterdam will be screening four Kramer films – including “Paris Window” and “Ladyworld” – and four shorts: “Bark,” “Intervene,” “Request” and “Sin Ultra.”

Kramer, who ran her own underground dance label in Los Angeles before turning to filmmaking, mentions the TV specials of Cher, Donna Summer, the Carpenters, Barbra Streisand, and Olivia Newton John among the myriad visual inspirations for her film.

“‘Give Me Pity!’ is a visually theatrical smorgasbord of pure talent, and uniquely entertaining” said Alief president Brett Walker upon announcing the acquisition.