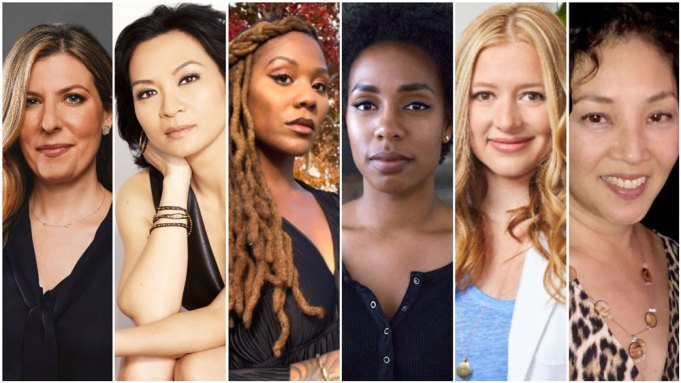 When “Nanny” writer-director Nikyatu Jusu got a message from the Sundance team in late January asking to jump on a call, the first time filmmaker realized that the project must’ve won an award, which would be presented publicly the next day.

First, Jusu thought that the prize might go to the film’s star Anna Diop, who’d been earning rave reviews for her performance as Aisha, a Senegalese woman who recently immigrated to America and begins working for a wealth family on the Upper East Side in New York City. Then, she speculated the prize could be for cinematographer Rina Yang’s work lensing the film, which would be a win for the whole team. But she didn’t imagine that the film would instead win one of Sundance’s grand jury award in the U.S. dramatic category — and she certainly didn’t expect her reaction to be captured in real time.

“I thought I had an evening to put together a comprehensive coherent speech. I was like ‘Okay, I’m gonna be poised,’” Jusu tells Variety, reflecting on the winning moment during a Zoom interview with the filmmaking team a few days later.

But after she clicked on a link to the “survey” she’d been sent by the Sundance team, Jusu was completely shocked to hear producer Chelsea Barnhard, a member of the U.S. dramatic competition jury, reveal that “Nanny” had won the top prize.

“I started sobbing as she was talking, and I was like, ‘Oh my God, did I even hear what we won?’” Jusu recalls. “I really didn’t think that we would win the top prize and I feel so grateful that we did.”

Despite being visibly overwhelmed by the news, the budding filmmaker pulled herself together enough to deliver a heartfelt speech. She first thanked producing partner Nikkia Moulterie (the pair first met at a barbecue before going on the decade-long journey to get the film made), then her parents.

“Most of the reason I got so emotional is because I lost my dad to cancer in the midst of the pandemic, and I know that since he’s been on the other side, he’s been pulling strings on my behalf,” she said in the speech. “I feel that in every way, especially now with this award.”

At the end of her remarks, the filmmaker shouted out a special group of supporters, naming producer Daniela Taplin Lundberg of Stay Gold Features; Topic Studios’ Maria Zuckerman and Ryan Heller; and LinLay Productions’ Sumalee Montano and Grace Lay, among those who “gave [Moulterie] and I space to utilize resources to truly show what our potential was in this industry.”

Beyond the emotion of the moment, the win was also historic — “Nanny” is the first horror movie to nab the top prize, with Jusu as only the second Black woman to win, following “Clemency” director Chinonye Chukwu in 2019. The two filmmakers are friends and Jusu remembers tearing up watching Chukwu take the stage to accept her award.

“I think Sundance is really in a stage of pioneering and being brave and championing projects that otherwise would drown in this industry or not garner attention. So it means a lot that they’re making that change on projects like ours and giving us a platform,” Jusu says, noting the impact of the honor. “Had we not won the Grand Jury Prize, who knows if people would be on Twitter, like, ‘Where’s the acquisition deal?’ It just gave us visibility in a way that has been elusive in the actual industry itself.”

Moulterie was the first person with whom Jusu shared the news.

“I was at a gas station when she called me, and I just started screaming while I was pumping my gas,” Mouterie shares. ”I’ve watched Nikyatu hustle and I’ve watched her nurture this clearly God-given talent. For me to know that Sundance, not only helped us along the way as far as the labs are concerned, but to have the film premiere there and then for her deservingly win that award, it was just coming full circle.”

Ahead of the film’s premiere during the virtual fest, Jusu posted behind the scenes images to social media thanking her “squad” for helping to craft the “labor of love” amid all the challenges that come with shooting an independent project during a pandemic.

Our labor of love, Nanny, premieres @ #Sundance2022 today. Thankful for this squad and fully ready to embrace the unknown on this crazy ass, serpentine filmmaking ride🕷🧜🏾‍♀️💕 pic.twitter.com/ZKRLHIhgSi

But while it always takes a village to make a movie, “Nanny’s” village was imbued with a particularly feminine energy, with a plethora of women working as department heads on the project (including cinematographer Yang, costume designer Charlese Antoinette Jones and casting director Kim Coleman). Plus, it had Jusu, Moulterie, Lundberg, Zuckerman, Montano and Lay among its core filmmaking team.

“At every stage, there’s been a woman reaching out to help us along in this process,” Moulterie says, highlighting their first major supporter, Sundance’s Anne Lai. “With a story like this, that centers a character like Aisha, it’s a project that readily resonates with women, so I think we found our way to the appropriate stewards of this project.”

She continues: “That’s been the flip side of this coin, the women involved have also found us. We’ve had some men, but Nikyatu wrote this story that really connected and there’s been no shortage of women wanting to be part of that.”

To start, Zuckerman met Moulterie at the Sundance Creative Producing Lab shortly after joining Topic Studios in 2019 and was immediately captivated by the story idea, which was in its early stages of development. Also at Sundance, Lai paired Lundberg and Moulterie as a producing mentor and mentee, and as their relationship evolved, the Stay Gold Features producer signed on to help shepherd “Nanny.” Zuckerman and Lundberg were also longtime friends before embarking on this project, their first time collaborating on a feature. Finally, in 2021, the filmmakers partnered with Montano and Lay’s LinLay Productions through Catalyst, the Sundance Institute’s film financing program. The movie started production that summer, as New York City reopened to production after the initial COVID-19 lockdowns.

“What you have from every aspect of this project is female collaboration,” Zuckerman points out. “To see women come together who have the ability to fund a project that’s something that I have not experienced up until now in my career. It feels like this is a new chapter.”

Montano explains that the the film spoke directly to LinLay’s mission of uplifting stories about other women of color. “For Grace and I, two Asian American women, both daughters of immigrant moms — in our case, Taiwanese and Filipina — to see such a beautiful artfully-made film that centers a woman of color, it’s everything,” she says.

Lundberg emphasized that the project also represented a smart financial play. The veteran producer was captivated by the way that Jusu weaved together West African mythology and symbolism into her high-concept horror narrative.

“The brilliance of this script was layering on that genre element. That made it a film that wasn’t for a small group of people,” she explains. “I felt like, ‘This is not only going to be a film that impacts hearts and minds and changes people’s perception of the immigrant experience, but it’s also going to draw people in because it feels so visually stunning and really commercial.”

Among the most striking scenes in “Nanny” are its underwater setups, including a real knockout setup that involves a mermaid. The visual effects required ample time to construct and they also conceivably commanded a generous portion of the seemingly film’s healthy budget, details of which remain under wraps — though it stands to reason that this was no shoestring production, despite the fact it’s Jusu’s first feature. The visuals were some of the final elements to lock into place as the production team raced to lock picture just days before the Sundance deadline.

Montano notes that the potential was evident from early on — “When we saw the first assembly cut, it was that immediate feeling that we had something special,” she says — but the whole team agrees that the process was an exercise in faith.

Moulterie credits the work that she and Jusu did in the Sundance labs with helping them speed through the process.

“The reason we made this schedule and made it through was because we had a director that had a vision, and could run, therefore everyone else was game to run with her,” Moulterie says as a disclaimer. “We had a beat to really figure out what the story was, which lent itself to being able to run. And we also had a producing team around us that gave us space when needed to figure out and hone in on any variables that might not have been in hand.”

The breakneck speed with which the film was turned around could be described as miraculous, but, Jusu admits that the winning film still feels like work in progress.

“All I see is the process, and I think, in retrospect, I’ll be able to really appreciate what we were able to do,” she explains. “I do appreciate it, but it’s hazy right now. I’m too close to the work to really wrap my mind around it.”

Either way, the grand jury prize proves the hustle was well worth it.

“There are a lot of firsts with this movie and it has to do with who directs movies like this, [plus] taking the genre itself seriously,” Zuckerman says. “A lot of the reviews end with a hope. They say, ‘We hope that this [movie] will bring more to come.’ And we [as a production team] hope that this will push the industry forward.”

Lundberg shared similar sentiments, adding “As people who have access to capital, it’s important that we keep searching out these stories that are underserved in the studio systems.”

“It’s a risk,” she admits. “We just have to keep being brave, because eventually we will break through. We all want Nikyatu to have a tremendous career in this industry, because her voice is so important, and it’s so unique.”

Looking back on the whirlwind experience, Jusu adds: “I hope I made it clear how thankful I am for this team and these women, and our male allies, because they have been fighting for Nikkia and I at every step of this process.”