Continue to Variety SKIP AD
You will be redirected back to your article in seconds
Jul 11, 2022 3:49am PT 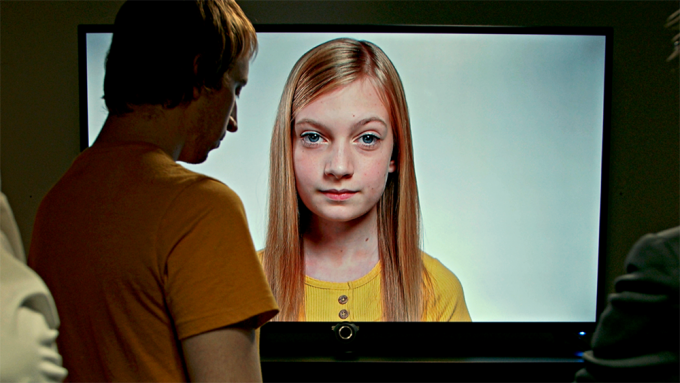 Ahead of its world premiere in competition at Montreal’s Fantasia, writer-director Franklin Ritch has provided Variety exclusive access to the trailer and poster for his first sci-fi feature, “The Artifice Girl.”

The film will premiere within the Cheval Noir strand, among a line-up of equally unconventional narratives brought to the screen by fresh and established global talents. Ritch is no stranger to high-profile genre festivals, having debuted his buzzy short film “Bedridden” at Fantastic Fest in 2018.

As the tech grows sentient and develops its own moral code, the characters are caught in the cross-hairs as they debate authoritative overstep, boundaries and abuse of power while questioning the fate of anonymity and autonomy.

A poignant commentary on the future of cognizant tech, the trailer taunts sharp discourse and a foreboding destiny for the observant young girl on the monitor, who looms over the characters as their lives intersect.

As the clip begins, the camera slowly zooms out on a stoic, seemingly timid young man at the opposite end of a table. The camera pulls back further to reveal two agents looking directly at him. A copy of a young girl’s photo is then slammed down in front of him by the female agent as she sternly asks if he recognizes her. The shots go on to volley between the young man, the agents, and a wall cluttered with the girl’s picture and case notes. Playfully haunting music overlaps the scene as the exchange begins to intensify.

Exhausted, the tech savant finally relents as the trailer winds down, revealing that the girl is merely an advanced and quickly evolving computer-generated simulation.

With concise and intimate shots and not wasting a moment of dialogue, the teaser proves effective at setting the ominous and vital tone carried on throughout the film. Simple framing allow the trailer to focus on the core narrative, honing in on the emotion it extracts from each character; a plot that’s as divisive as it is intriguing, utilizing dark and often eerie sets adds to the mystique.

“The Artifice Girl” casts memorable up-and-comers David Girard (“Teardrop Goodbye”) and Sinda Nichols (“That Abandoned Place”) as special agents Amos McCullough and Dena Helms, and Tatum Matthews (“The Waltons: Homecoming”) as Cherry, along with Lance Henrikson (“The Blacklist”), and Ritch, himself, who plays Garreth, the troubled vigilante whose lofty creation kicks off the moral quandary.

On laying the foundation for the project, Ritch commented, “While this is a wildly ambitious science fiction, it was important for us to ground the story in technical veracity and thoughtful characters. It becomes a compelling mystery that will hopefully incite ethical and philosophical discussion.”