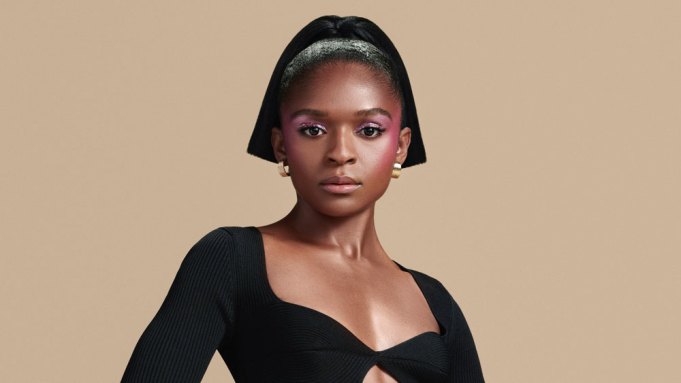 Just hours after Dominique Thorne made her Marvel Cinematic Universe debut as Riri Williams in “Black Panther: Wakanda Forever” at the film’s world premiere in Hollywood on Oct. 26, she hopped on a flight to get back to work on “Ironheart,” the upcoming Disney+ spinoff in which she stars.

Asked what she’ll remember most about sitting in the Dolby Theatre to watch “Wakanda Forever” for the first time, Thorne told Variety, “Riding the waves of emotions with the audience — getting to hear and see and feel folks hold their breath, or laugh, or cry, or try to wipe away their tears discreetly from moments that touched them.”

Thorne made it through the movie without tearing up, until an in-memoriam tribute that included late “Black Panther” star Chadwick Boseman as well as Thorne’s makeup artist A.J. Crimson, who died in March, flashed on screen. “They got me right at the very end,” she says.

In the film, Thorne’s Riri is a MIT genius who will play an important role in the MCU moving forward. In August 2020, she was offered the part in both the movie and the Disney+ series by Marvel producer Nate Moore. While she was “stunned” to get the multi-project offer, Thorne also recognized the importance of being involved in such a weighty production.

“This was the first time that I was in the field having to tackle what it means to grieve and move forward this directly,” Thorne explains. “I think the film was a necessary healing, not only for the audience but especially for the cast — the very real people that lost their very real friend and brother.”

Obviously, this movie is a tribute to Chadwick Boseman, but it’s really a tribute to so many people who were involved. What does it mean to be a part of a project that is tackling such a big topic as grief?

To be a part of a film that is doing that, on every level, but also for the audience, is major. Because the work that we do has impact beyond ourselves.

It’s undoubted that Chadwick’s work, his mark on the world through playing T’Challa and the Black Panther is not only iconic, but it also unlocked this door, this wealth of emotion and wealth of opportunity and representation for Black faces and Black children in this space. To experience that loss, and to go through those emotions without an acknowledgement from the world that gave him to us would definitely have been a lost or missed opportunity, that I know the folks at Marvel — and especially Mr. Ryan Coogler – were not going to allow to come to pass.

Fans have been excited to see this friendship between these two young geniuses in the film, Shuri, played by Letitia Wright, and Riri. What was it like building that bond?

She was one of the first folks in the cast to come up to me and introduce herself. She was very clear about the fact that I belong here, and that I’m meant to be in this space, and that there might be many things that I have questions about, but that should never be one of them. She really took it upon herself to be not only an incredible, providing scene partner, but also make herself available as someone who herself went through a transition in her career in the way that I believe she was anticipating I might be making at this time. That also helped with the relationship on screen because I knew that this was someone that genuinely had my back, and I made it quite clear to her that I have hers as well.

You had auditioned for “Black Panther” before and then the call came to do this role. How did you learn Marvel wanted you to play Riri?

I was just told that I would be getting a call. No context at all, just that someone would be calling me soon about something. And eventually it was Nate Moore, who called and asked me if I was familiar with the character, to which I responded, “Of course.” And he said that they’re going to develop her for Disney+ series and that they’d like to introduce her through “Black Panther: Wakanda Forever,” and followed that up with if I would be interested in playing that role.

And what was your reaction?

I was stunned. I had no words; I was quite literally speechless. I was waiting for him to tell me how the process would go, that he’s gonna send me the audition sides, or I can record my tape, or this is when they’d like to get my audition in by. I’m waiting for him to give me the rest of the information, and it never came; it was simply, “So do you want to do it?” which was incredible.

What about joining the MCU was different than you expected?

How much of it was imagined. I had never set foot on a blue screen before, nor had I been on wires and elevated off the ground to do my job. The main thing is just getting familiar with the imagined space, which really is just creativity heightened or intensified.

What was it like putting on your Ironheart suit for the first time?

Ah, man, it was pretty cool, I’m not going to lie. It was pretty otherworldly to feel the weight of it. That was the quickest entry point into Riri Williams because, of course, I know that she’s an engineer, she’s a mechanic, I know she is a gearhead. She’s into building things with their hands — very much from scratch — to form what’s in her mind.

Unlike some of the other suits that may be added in later with visual effects, the Mark I was all practical. To get to feel the weight of that on my body and just understand how it moves — you almost want to say it’s clunky, but when you have it on, you realize, “Oh, this is actually such a smart build, like all my joints are free so I have so much movement. But also, this is heavy as hell. And it flies? Whoa!” The doors open wide into Riri’s mind and how she thinks, what she saw was possible and then actualized.

How long did it take before you got comfortable moving around in it?

After the first time that I went up in the air on wires — it couldn’t have been more than like two weeks [into filming] — walking around in it became a lot easier. They just told me the weight of it like a month ago. They waited until we were done.

How much does it weigh?

That is exactly half my body weight.

Wow! Well, you got really strong doing this as well…

Oh, man, all the way around. Physically, mentally, spiritually.

How does “Wakanda Forever” give insight into Riri’s personality as you move forward into what we’ll see and learn about her on “Ironheart”?

The film does such a good job of showcasing one sliver, one side of who she is. We get a little taste of the colors that exist within her — we see her as a hustler; we see her as a little bit of a bully; we see her fearful; we see her in all these different lights. But primarily, she is in a world of confusion. This is her outside of her element, in the very opposite of her comfort zone, so the Riri that we see, it’s a bit of fight or flight [mode].

That’s such a great place for the audience to be because by the time that they get to “Ironheart,” they are in for the chance to sink into who she is truly, without the war of the worlds [between the kingdoms of Wakanda and Talokan] in the background. We get to see who she is day-to-day, but also get a bit more of an understanding of the genius that got her into this situation in the first place.

How would you describe going from being introduced in this film to now leading your own series?

It’s such an honor, honestly, and such a joy. I had some inkling about what it might be like to shift gears in that way, but definitely could not have anticipated some of the lessons learned, or the deepening of this perspective that I feel like I now have. Overall, it’s been a beautiful journey.

She’s such a gift of a character to play and because this was a preexisting character, to have her shaped, and molded, and more-or-less defined by the words and through the eyes of Ryan Coogler, and of Miss Chinaka Hodge [“Ironheart’s” head writer] for this series is truly a blessing, truly a gift. I really do feel like I’m getting the chance to play a full well-rounded human being, with the full scope of emotions and shit going on, and all the things that make us as people interesting.

“Black Panther: Wakanda Forever” debuts in theaters on Nov. 11, while “Ironheart” is expected to premiere on Disney+ in fall 2023.