Jessica Chastain, Ariana DeBose and Kristen Stewart each have, in their own stylish right, delivered fashion moments to remember this awards season. Whether or not they take home a golden statuette on Oscar night, this trio of talented trailblazers has already won us over with a bold and beautiful red carpet style. 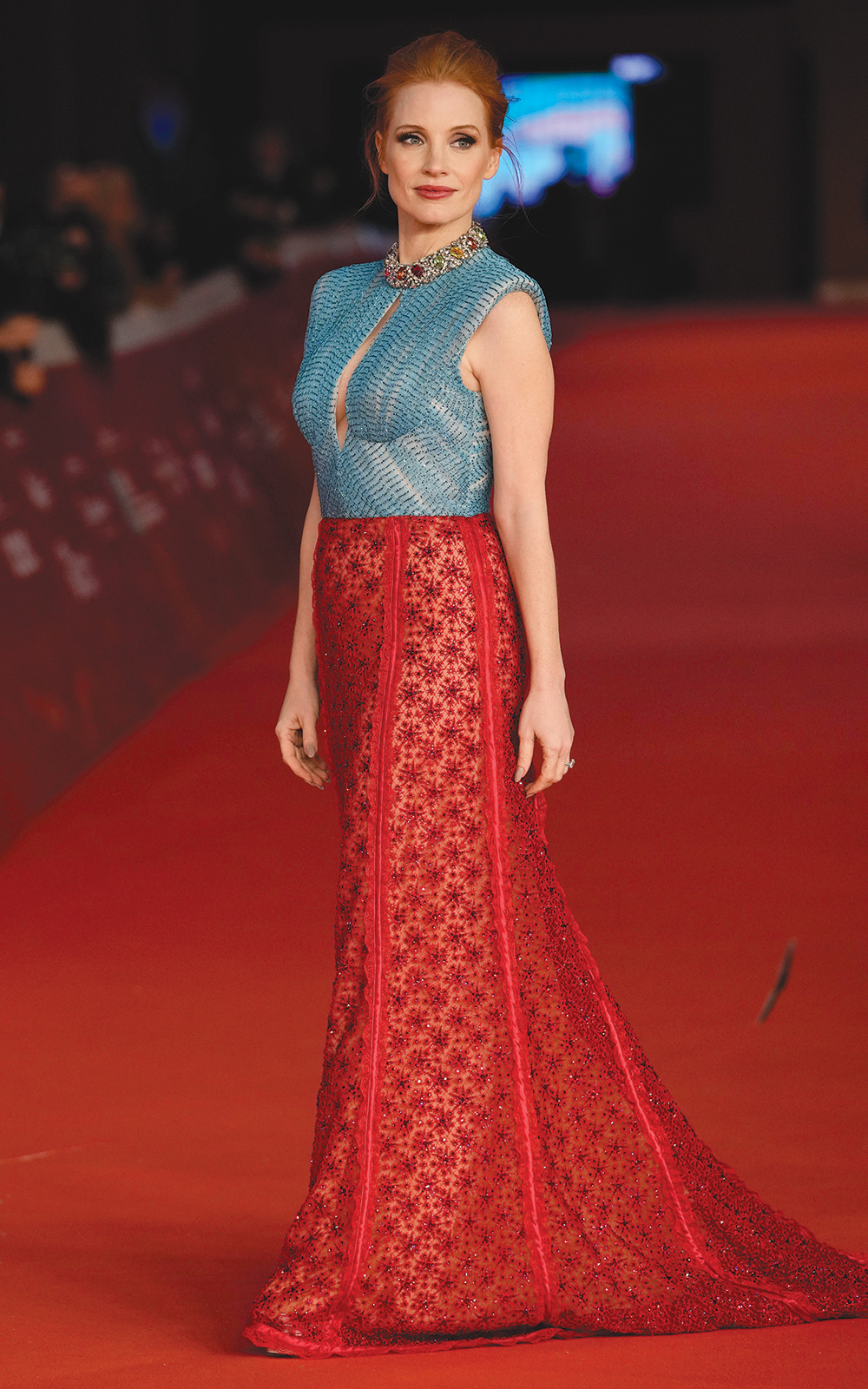 “This look is so interesting because it’s couture-level embroidery on a T-shirt!” says Chastain’s stylist, Elizabeth Stewart, of the asymmetric embroidered top. “Jessica loves a clever twist like that and she loves pants.”

“The back of this dress was just extraordinary and the fit was impeccable,” says Stewart of the revealing, crystal-embellished showstopper. A sultry departure for her, “The Eyes of Tammy Faye” star pulled it off with aplomb.

Gucci at the Rome Film Festival

“We just loved the interesting color combination and the jeweled neckline of this unique dress by Alessandro Michele,” says Stewart of the Gucci designer who created the striking two-tone look.

Dior Couture at the SAG Awards

“Jessica was feeling suit-y,” says Stewart of the “simple and pristine” two-piece Chastain wore at the SAG Awards (where she won). “The deep plunge in front added the glamour,” adds the stylist of the fashion-forward look accented with DeBeer diamonds.

Michael Kors at the “West Side Story” New York premiere

“The West Side Story” star says she felt “bold, bright and beautiful” in this shimmery white strapless top and skirt combo. The supporting actress nominee accessorized the semi-sheer, custom look with Chopard jewelry.

Giorgio Armani at the “West Side Story” L.A. premiere

“I wanted to be a walking flame,” DeBose says of the fiery red custom tuxedo that more than delivered. “The illusion of red dripping crystals on the bodice make the look everything I could’ve anticipated for such a red carpet moment.

“It’s [Pier Paolo Piccioli]’s world and I am honored to live in it,” BAFTA nominee DeBose says of the Valentino designer who created the vivacious ensemble she wore fresh off the runway.

Valentino at the SAG Awards

Pink may prove to be DeBose’s lucky color. She took home the SAG Award in another vivid pink Valentino that she says made her “a modern day Marilyn Monroe.” DeBose also thanked her stylists, Zadrian Smith and Sarah Edmiston, for allowing her to “shine through their artistry.” 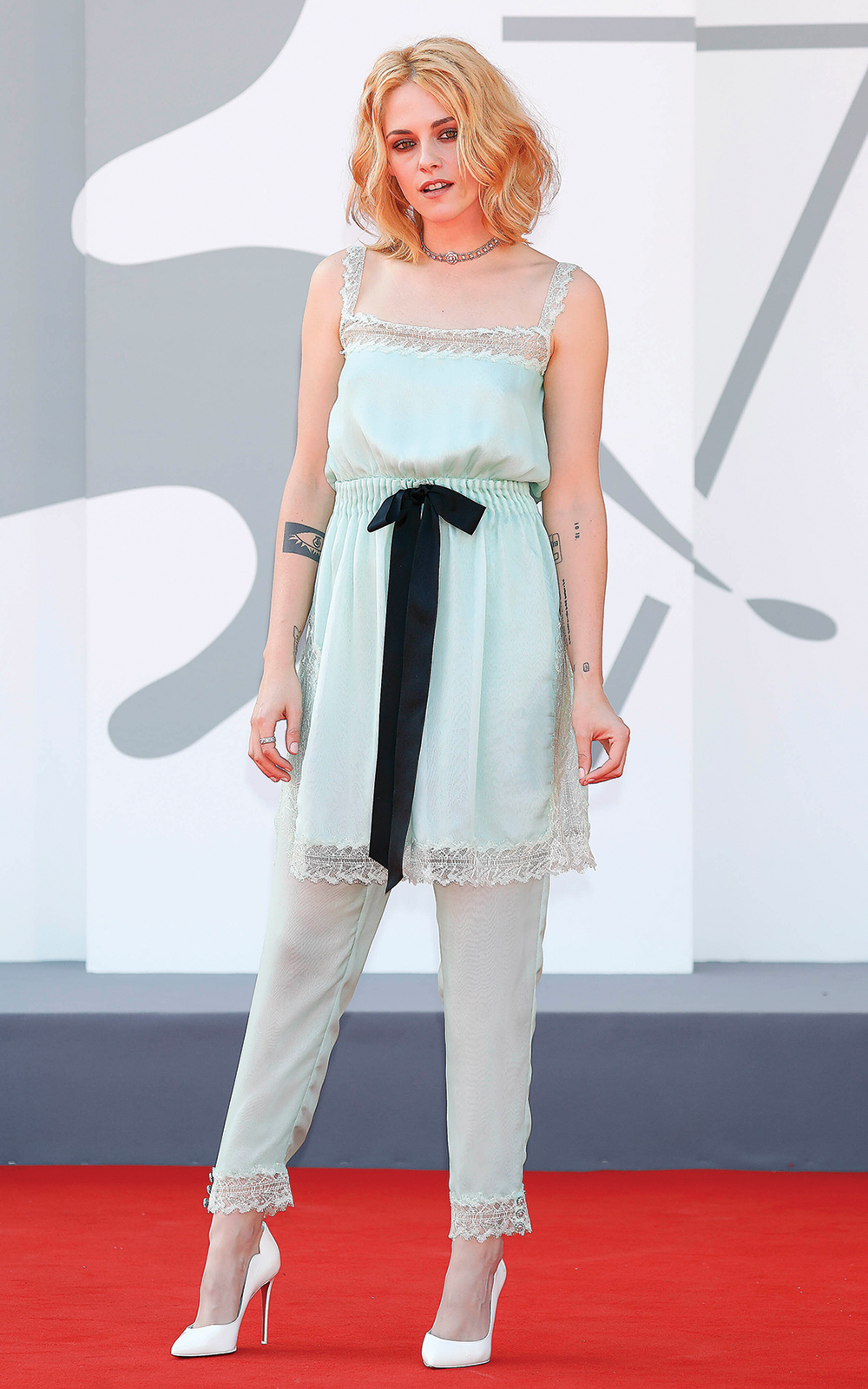 “We loved the laissez-faire attitude of it,” says the lead actress nominee’s longtime stylist Tara Swennen of the “very light and airy” lingerie-inspired look that evoked a young Diana Spencer.

Chanel at a “Spencer” photocall in Venice

“Kristen immediately fell in love with it,” says Swennen of the daring romper that looked both chic and cool. “It’s a really fun play on a Chanel jacket with a twist,” says Swennen. “It was comfortable, believe it or not, so it hit all the boxes.”

Chanel at the “Spencer” London premiere

For the film’s debut in the late princess’ hometown, the “Spencer” star opted for simplicity. “It was so classically elegant for the ages,” says Swennen of the silver column with intricate beading and embroidery. “We wanted it to be beautiful and special.

This edgy, custom-created twopiece was inspired by a Victorian corsetry piece Stewart wore under a ballgown in the movie. “She loved the idea of a peekaboo, underpinning type feel to the skirt, almost like an ode to the costume design of the film,” Swennen says.