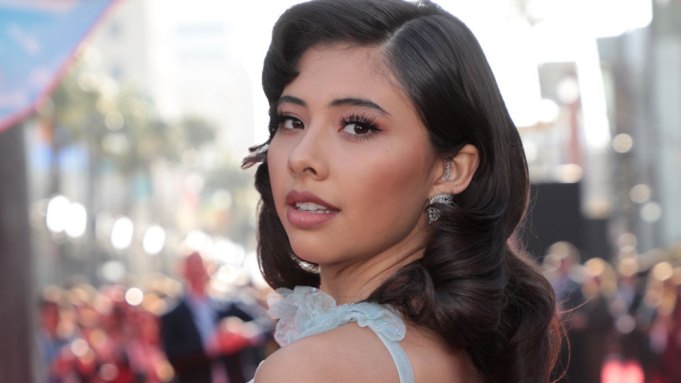 Talk about a Sweet 16 to remember!

“Doctor Strange in the Multiverse of Madness” star Xochitl Gomez celebrated her birthday on April 29, and on Monday night Marvel fans lined up outside the Dolby Theatre in Hollywood surprised her with a spontaneous rendition of “Happy Birthday” to mark the occasion.

The young actor, who stars as America Chavez — the teenage LGBTQ+ Latina superhero who jumps through the multiverse via star-shaped portals — was visibly surprised and moved by the gesture, giggling in response to the chorus. Gomez had just finished explaining to Variety that she was trying to keep her cool at the event when the singing began.

“This is going to be like one of the lifetime experiences for me, honestly,” Gomez said about watching the finished film with fans. “I know that Benedict [Cumberbatch] and Lizzie [Olsen] have gone to their movie premieres; they’ve seen themselves on the screen, but this is a whole other thing for me.”

Gomez had seen earlier versions of the film but Monday night’s premiere was her first time viewing the completed version with a venue filled with fans.

“I’m really excited. I might cry,” she said, quickly attempting to talk herself out of the emotions. “No, I’m not gonna cry.”

For any actor, starring in a Marvel movie is a big deal, given the these blockbuster movies have career-altering potential. But despite the fact she’d already walked the red carpet for other Marvel titles, including “Black Widow,” “Shang-Chi,” “Hawkeye” and Sony’s “Spider-Man: No Way Home,” this moment was something else entirely.

Taking up the mantle of America Chavez comes with some weight — the character not only furthers representation for women and people of color in the superhero franchise, but she’s also the first lesbian in the MCU and speaks about her two mothers in the film (a topic which has been controversial in some overseas territories).

During the press junket for the movie, Gomez told Variety that it was “a huge deal” to represent for the LGBTQ community, pointing to the rainbow flag pin Chavez wears on her jean jacket, as well as the one painted on the back of it (Both are represented on Chavez’s action figure.)

When Gomez starred as Dawn on Netflix’s “The Baby-Sitter’s Club,” she got a taste of the experience hearing from other young women. “it was so sweet to get, just the most heartwarming messages from fans, and especially Latina girls, who would just be like, ‘I see myself on screen because of you.’”

At the premiere event, she added that she’s particularly proud of showing some authentic teenage representation

“It’s really crazy because I was 14 and she was 14,” Gomez explained. “I feel like teens don’t really get as much representation because they have like, 20-year-olds playing 15-year-olds. So what’s better than an actual 14-year-old playing 14.”

The Marvel-ous red carpet experience is old hat for MCU veterans like Benedict Cumberbatch or Elizabeth Olsen, who’ve notched six movies and a TV show apiece, but they were both thrilled for the newcomer.

“How’s she doing?” Cumberbatch asked, explaining that he’d come on the tail end of the arrivals so he didn’t get to spend a ton of time with his young co-star. “It’s a big moment for her.”

Of welcoming Gomez into the MCU fold, the Oscar-nominee shared, “All the moments that you kind of — I wouldn’t say take for granted; my eyes still pop out about the stuff I get to do and people I get to deal with — but to see it through fresh eyes just renews your enthusiasm for it. She’s having such a riotous experience so young. It’s amazing.”

Olsen also heaped praise on the newcomer, saying, “She has such a vitality to her. She has such so much like confidence being so young. I mean, I was 25 when I started, and she’s like way better off than I was.”

During the global press conference ahead of the film’s launch, Gomez said she would study Olsen on set to help her prepare for scenes.

“I did look at Lizzie, you know, especially while she was acting, and getting ready to kind of do the scene. … She’s just, you know, a powerful woman,” Gomez said. “Especially me as a young girl, I would constantly look up to her, and I realized how much five minutes before a scene that’s kind of difficult, she would kind of get in that moment. And I realized that, ‘Oh, well, if she’s doing it, I should probably do it, too.’”

“Doctor Strange in the Multiverse of Madness” is in theaters on May 6.