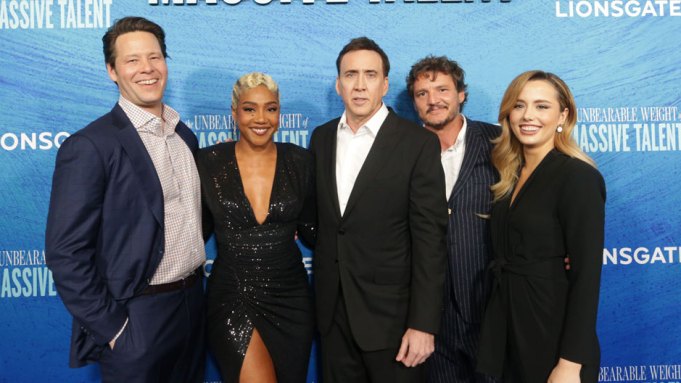 Before it was used to describe the Internet’s next frontier or became the new name for Facebook’s parent company, the term “meta” was predominately used to describe something that is characteristically and cleverly self-reverential.

No word could better encapsulate the vibes of Nicolas Cage’s latest movie “The Unbearable Weight of Massive Talent” — a movie about making movies, in which the Oscar-winning actor plays a version of himself, named Nick Cage — and its Los Angeles premiere event.

The special screening was held at the Directors Guild of America Theater in Hollywood, where Cage and his co-stars Pedro Pascal, Tiffany Haddish, Ike Barinholtz and Lily Mo Sheen walked the electric blue carpet to promote the meta-comedy-drama-action film.

The story follows “Cage,” an actor on the brink of retirement, who ends up embroiled in international espionage after accepting a $1 million dollar offer from a superfan in order to pay back debts. What follows is a silly and twisty ode to Cage’s forty-year filmography. Like the movie’s premise, it seemed like every aspect of the premiere hinged on the actor’s myth and mystique.

In some respects, it was the usual movie star dance, with Cage smiling for photographers on the carpet, posing alongside his wife Riko Shibata and eldest son Weston Cage Coppola .

He also signed autographs for fans as onlookers peered over the heads of red carpet reporters hoping to catch a glimpse of the actor before heading into the theater.

Things got a little more meta than your usual Hollywood premiere at the after party. For starters, attendees walked the few blocks down Sunset Blvd, following the path “Nick Cage” drives to take a pitch meeting at the famed Chateau Marmont in an early scene from the movie. The party was held a few hundred yards away from the hotel, at Hyde Sunset, which is itself a Hollywood institution.

Inside the nightclub, staff wore T-shirts with Warhol-esque impressions of Cage’s face, while coasters (also with photos of his face) rested on the tables and guests posed in a photo booth with cardboard cutouts of (again) his face and plastic replicas of his golden guns from “Face/Off.” On the nightclub’s plush couches rested sequined pillows emblazoned with Cage’s face.

While some stars would have balked at the hyper focus on themselves, Cage gamely embraced the moment. As guests enjoyed their Umami “Massive Burger” samples and sipped their Casamigos cocktails, the actor hung around the celebration for a couple hours greeting well-wishers and posing for more than a few selfies.

But Cage was not the only star to get in on the meta-action. When the DJ pumped up the volume to get guests onto the dance floor, Haddish partied to her own song. Haddish debuted a fun new track, tentatively titled “Like This,” with a feature from Snoop Dogg and lyrics including “This what fame looks like. This what success looks like.” Pascal later joined her as partygoers’ cell phone cameras recorded their every move and groove.

“The Unbearable Weight of Massive Talent” opens in theaters Friday.