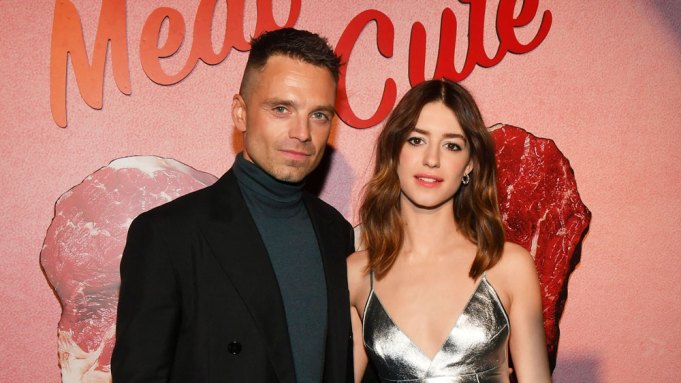 Daisy Edgar-Jones may have become a bona fide star two years ago when she starred in Hulu’s hit drama series “Normal People,” but Thursday night marked the first time she actually walked a premiere red carpet.

Edgar-Jones jetted to Los Angeles from the U.K. for the premiere of “Fresh,” her new horror-thriller that co-stars Sebastian Stan and Jojo T. Gibbs, at Hollywood Post 43.

“I always kind of imagined like, what if one day I get to go to a film premiere in Hollywood,” Edgar-Jones told me. “It’s all overwhelming, but in a great way. All the photos kind of reminded me of getting my picture taken at school.”

Donning in a silver Loewe dress and cracked-egg heels, she reunited with her cast and the filmmakers. “You looking fucking gorgeous,” she told Gibbs.

The evening included a pre-screening reception because event producers worried guests wouldn’t want to eat after the showing because of the movie’s cannibalism storyline. The bar was decorated with jars of raw meat and bones. Edgar-Jones and Stan posed for photographers in front of a poster of a piece of steak with the words, “Meat Cute.”

Without revealing too much, I can tell you that “Fresh” is a look at dating, toxic masculinity and the objectification of women. It’s twisted, but also comedic at times. “I tell people it’s about a woman who meets a man in a grocery store and then the story kind of goes on a crazy roller coaster ride,” Edgar-Jones said.

Edgar-Jones was attached to the film before Stan signed on.

For his character, Stan prepared by studying up on Jeffrey Dahmer and Ted Bundy, and consulting with an expert on serial killers. “It was like, I have to find a connection to this thing,” he recalled.

Despite the film’s very dark storyline — “It’s intense at times,” Stan said —  the cast and crew managed to lighten things up while shooting. “We really had a laugh making the film, despite the darker aspects,” Edgar-Jones said. “On the whole, it was very fun to make. I think that translates on screen when everyone is having fun with it. I think ‘Fresh’ treads that line very well. Just when you think it takes you too deeply, it takes you out with something weirdly funny and you find yourself laughing — but then also feeling guilty about it.”

“Daisy has an unbelievable sense of humor,” Stan said. “We kind of connected over that from the very beginning, even over Zoom.”