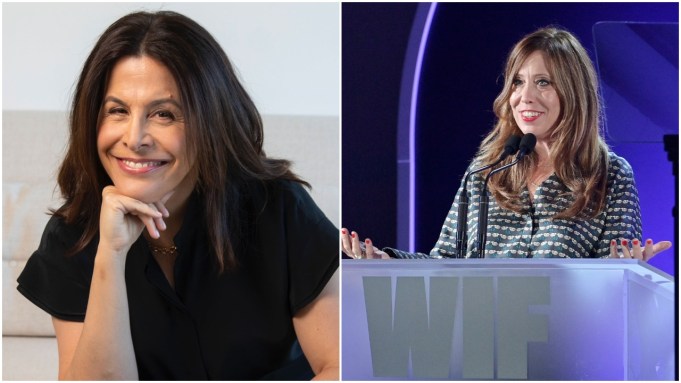 When Amy Baer left her job as president and CEO of CBS Films in 2011, she decided to go into business for herself.

Though Baer had built an impressive résumé, including tenures at CAA and Sony Pictures Entertainment and overseeing and developing such hit films as “My Best Friend’s Wedding” and “Moneyball,” she struggled to raise the few million dollars needed to launch Gidden Media.

“I wasn’t being presented the same kinds of opportunities as men that I knew who had very similar circumstances and were suddenly being handed massive deals,” Baer recalls. “It wasn’t because I didn’t want to raise the money. I knew how to write a business plan. I had dozens of meetings and ended up raising the funds from a person who had a high net worth who was willing, by virtue of a personal relationship, to invest in me. But you can’t rely on that.”

Baer now heads MRC Film’s Landline Pictures, a label targeting audiences over 50, which is about to launch its first movie, “Jerry and Marge Go Large,” starring Bryan Cranston and Annette Bening. She also is the president of Women in Film, and it was during a 2018 board meeting that Baer realized she wasn’t alone in the challenges she faced.

Women in Film CEO Kirsten Schaffer sat alongside Baer as board members opened up about the obstacles they had to overcome when starting businesses or making movies. As Schaffer and Baer conducted a back-of-napkin count of the women-led companies in the screen industry, they came up with a shockingly low number.

Baer believes that won’t improve until female entrepreneurs have more access to capital. The same holds true for Asian, Black and Latino producers and creators. To fix this cyclical problem, though, these anecdotes needed to be turned into action, and action required ammunition in the form of research.

The resulting study, “Women Entrepreneurs in the Screen Industries: Obstacles and Opportunities,” commissioned by WIF and conducted by Pepperdine University’s Alicia Jessop, breaks down the differences between male and female entrepreneurs accessing funding in the movie business.

In short, the research validated the experiences of Baer and many other women.

“Why we see so few women at the helm of companies is not because they don’t have the same education as men or as strong of a background,” Jessop explains. “What’s happening is that there is a system in play that helps certain people and doesn’t help others.”

In addition to confirming the dearth of women-owned businesses in entertainment, the study also reveals the barriers that have led to this issue and proposes strategies for promoting entrepreneurship for women and driving more money to their companies. The most critical steps forward, the study argues, are to fund women-owned companies, expand networks, increase financial literacy and end systemic bias.

With those calls to action in place, Schaffer hopes this will be a “light bulb” moment for the industry.

“We really need transparency. Every single funding institution should be asking themselves, ‘Who are we funding? Does it reflect where we want the industry to be?’” she says. “It may eventually call for a higher level of transparency from an outside entity. We want people to do it themselves. But if they don't, maybe we'll do it.”

Women in Film began to formally dig into these issues of parity in 2018, when board member Stasia Washington connected the organization with Pepperdine University’s department of Entertainment, Media, Sports and Culture and Jessop, a sports journalist and professor, who would attempt to figure out why there are so few female-owned and -operated companies in the industry.

“Women in Film wanted to verifiably and validly answer that question,” Jessop recalls, admitting that she believed she already knew the answer. “I thought it had everything to do with networking — and that was one of the findings — but it turned out not to be the only finding.”

The study analyzed the motivation for entrepreneurship between the genders. When male interviewees recounted their journeys, Jessop learned that many men started out with an idea "that they hadn't validated, they didn't have a fully hashed-out business plan on, and they ran with that hunch, and they had people coming to them, offering them money very quickly, or offering to open doors to get them to very significant money."

On the other hand, Jessop found that the women she interviewed more often pursued entrepreneurship out of necessity, rather than possessing the innate confidence that they could make a sizable return on an investment, a desire to disrupt industry norms or solely based on the business opportunity.

"They were telling me, 'I had to pursue entrepreneurship, because every other avenue in my career had foreclosed for one reason or another,'" Jessop says, recalling some of their reasons for striking out on their own, like "I wasn't going to be promoted any further in the studio," "I couldn't manage being a mother and working in the studio" or "I was experiencing harassment at work and needed to get out of that climate."

To conduct the extensive study, Jessop employed a research technique known as snowball sampling, with subjects ranging from 25 to 74 years of age and from a variety of racial backgrounds. Women in Film selected 114 male and female production company owners and principals to answer a 65-question survey through which Jessop could learn about their experiences as entrepreneurs. Jessop also conducted 35 qualitative interviews with those entrepreneurs to get a more in-depth understanding of the challenges they’ve faced on their career trajectories.

In addition, WIF’s Entrepreneurial Pathways advisory council (a group made up of male and female entrepreneurs, agents and entertainment-adjacent professionals) urged high-ranking Hollywood players to participate in the research — as did Baer and Schaffer through personal letters. Jessop connected with 31 of the most influential decision-makers in the business (studio heads and executives with the power to offer studio-subsidized deals, as well as other top financiers, venture capitalists and businesspeople), who agreed to sit for hourlong conversations to discuss the business. Because all 66 qualitative interviews were conducted with the promise of anonymity (and via Zoom amid the pandemic) Jessop’s subjects were candid.

“I sold my house to fund my business. Nobody was giving me any money,” one female entrepreneur told Jessop about her transition from working as a salaried studio executive to striking out on her own. She used the money from the sale to help finance a film and moved her family into an apartment.

While the anecdote shocked Jessop, Baer was not surprised. She says it mirrors other stories she’s heard from women in the industry. In Baer’s estimation, the study has converted those anecdotes into verifiable fact — and given them a megaphone. The research also confirms other conventional wisdom, such as that circumstances are bad for white women, but they’re even worse for Black women and people of color.

“People aren’t willing to invest in a person of color or woman unless they are at the top of the food chain. People of color and women have to crawl through more barriers to be given a chance,” one Black male entrepreneur was quoted in the study as saying.

Baer suggests another factor to consider -- the industry's focus on an entrepreneur's track record of success as justification for investment creates another obstacle. "If you're looking at track record over a length of time, the last 30 years have been predominantly dominated by white men in senior positions. So how can a woman or person of color compete with that?"

Despite the disparity, Jessop notes that because “women of color are facing the steepest barriers to entry in obtaining funding, that’s a huge opportunity for these companies and studios — who after George Floyd’s murder came out and positioned themselves to support Black Lives Matter, racial equality and equity — to examine whether women of color actually have the same opportunities.”

Furthermore, Jessop’s most statistically significant findings dealt with financial literacy. The study found that women felt less confident than men in their ability to structure deals and compete for capital and less assured in asking for the money they need. Though this study didn’t ask why women felt that way, Baer hypothesizes that the uncertainty comes from seeing other women ask and then struggle to succeed.

Jessop pointed to a few more factors: “There has been a system in place for a long time where capital is made more readily available to men than women; men have networks that include decision-makers and people who can finance projects at a higher rate than women; and there's a greater safety net for men."

"If your business fails," she explains. "[Men] feel a bit more strongly that they can either go back into the workforce and perhaps be promoted, or find a career that aligns with your familial responsibilities, where the same doesn't exist for women.”

That suggestion is backed up by another surprising statistic: 0% of male entrepreneur interviewees self-indicated that parenting obligations presented a barrier to pursuing screen industry entrepreneurship, compared to 27.8% of female entrepreneur interviewees. Since so much of the industry is building on networking, the study suggests that networking methods preclude women from creating important male-female professional relationships and, therefore, restricts their access to funding and other business opportunities.

"Relationships are formed through activities that often take place after work and are aligned along gender and racial lines. A lot of networking goes on at night, which negatively affects those who are parents,” one decision-maker is quoted in the study.

A female screen industry entrepreneur with thirty years in the business said: “The men were socializing on the golf course and through sports. Women were just completely left out of that. It seemed like the networking was so male that it was very hard to push up through that."

To create more equitable access across genders, Jessop says the industry's view of networking has to change.

"The entertainment industry has been able to create a lot of great things in the entertainment industry, but how many more great things could we create if some of our tendencies, practices and systems were reevaluated to truly be more inclusive," Jessop declares. "If the only opportunity for a person within your organization to network with decision-makers or thought-leaders comes after business hours, that's holding out at least 51% of the general population -- that being women, who most of the care-taking responsibilities fall on."

Over the next year, Women in Film plans to incorporate more financial literacy training into its programming to help support its membership and women across the industry. The workshops aim to help women refine their business proposals and put it into the language that the male decision-makers use. “I think we have to do a better job of empowering women to teach themselves,” Baer says.

"In some ways, women are well-networked, but we're not ultimately well-networked enough with decision-makers," Schaffer adds, pointing to the role the representatives (including agents, managers and lawyers) must play to help foster these relationships for women.

The organization’s goal with the study is to shine a light on both the problem and the opportunity presented for companies to put their money where their mouth is in terms of adhering to the diversity, equity and inclusion initiatives they aim to promote.

“We’re getting tired of reading, at least once a month, a new announcement about a man who leaves a job and suddenly has raised hundreds of millions of dollars to start a new business,” she continues. “That isn’t to say that I don’t wish them well. I’m just looking for women to get their fair share.”

Read the full 73-page study below: