Ryan Reynolds Compares ‘The Adam Project’ to ‘E.T.,’ Insists Deadpool Is Not in ‘Doctor Strange 2’ 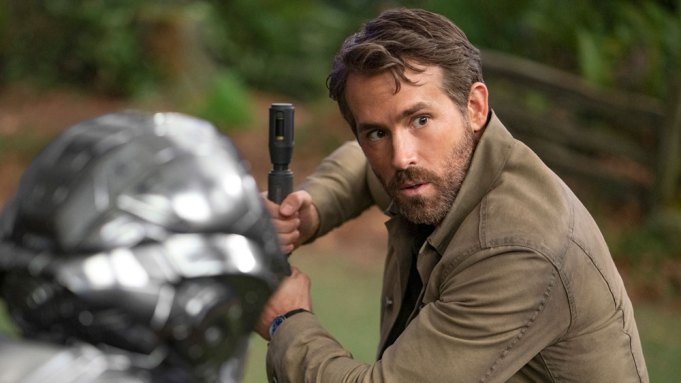 Despite rumors flying that Ryan Reynolds’ Deadpool appears in “Doctor Strange in the Multiverse of Madness,” the actor say it’s not happening.

“I’m really not in the movie,” Reynolds told me on Tuesday night at the London West Hollywood before a special screening of his upcoming Netflix sci-fi action movie “The Adam Project.”

When I suggested he could be lying, Reynolds insisted, “I’m promising, I’m not in the movie.”

Fans have been speculating after some noticed what they believe is an image of Deadpool in a new poster for the upcoming “Doctor Strange” sequel.

As for the third “Deadpool,” Reynolds would only say, “It’s coming along.”

In “The Adam Project,” Reynolds stars as Adam, a fighter pilot in 2050 who befriends his 12-year-old self when he travels back in time to 2022. Newcomer Walker Scobell makes his big screen debut as the young Adam.

“I met him on Zoom,” Walker recalled of meeting Reynolds for the first time. “It was definitely weird to see him like actually interacting with me. But in person he’s way taller than I thought he would be.”

Walker happens to also be a big “Deadpool” fan who can recite lines by heart from the antihero films. “We read, I don’t know, 147,000 kids it felt like, and then Walker read and it was just instant,” Reynolds said. “I think it was because he’d watched ‘Deadpool 1’ and ‘2’ thousands of times. He knew them backwards and forwards. So logically we worked so well because he could be a mini-me.”

“The Adam Project” marks a reunion for Reynolds and his “Free Guy” director Shawn Levy. Rounding out the cast are Mark Ruffalo and Jennifer Garner as Adam’s parents, as well as Zoe Saldana and Catherine Keener. “It felt like one of those big wish fulfillment movies with huge stakes and high concept, but it was really about something very personal as well, which is sort of what I loved about movies in the ‘80s — what I loved about ‘E.T.’ and ‘Back to the Future,’ and anything that [Steven Spielberg’s] Amblin did… ‘Goonies,'” Reynolds said. “It just felt like it sort of harkened back to that kind of filmmaking and in the period we live in right now, it felt timely.”

He added, “I always think of it like the Mary Pickford model, which is make them laugh, make them cry and then bring them back to laughter. If you can do that, you’ve made something worth watching.”

He and Levy were interested in finding another original story like “Free Guy.” “That was a totally original idea that worked theatrically,” Reynolds said. “For us that felt incredible. And we love IP, and we love superhero movies. We love all that stuff. But this was a special experience, and we really wanted to keep that train marching along.”

While Reynolds is known for doing a lot of his own stunt work, the 45-year-actor said things began to be a bit more painful about a decade ago. “You’re not allowed to eat Advil like cereal,” he said. “Things start to hurt. After I turned 35, being thrown onto cement wasn’t hilarious anymore. It had been upgraded to hell.”

“I really like physicality in movies,” he continued. “I think it’s important to do as much of it yourself as you can, But I’ll step aside when there’s something that’s just too gnarly and there’s a trained professional ready to go.”

“The Adam Project” includes a running gag about “Star Wars,” a franchise that Reynolds said he would certainly be open to joining. “That would be a real hard thing to say no to, but honestly — I’m not making this up — it’s not something I’ve ever thought of,” he said.

And speaking of going back in time, I asked Reynolds what he would say to his 12-year-old self if he had the chance. “I think I lived in my head so much,” he said, adding, “I probably would tell him to just lighten up. Enjoy it.”

“The Adam Project” premieres on Netflix on March 11.