‘Bros’ Star Luke Macfarlane on Coming Out, Bulking Up and His Sex Scenes With Billy Eichner 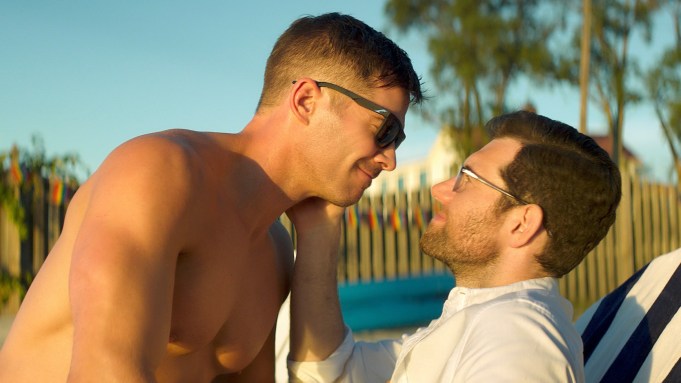 Welcome to this week’s “Just for Variety.” As you’ll read (and see in the video above), this week’s column is a little different this time around.

I am running around the Beverly Center trying to find something to wear for my interview with actor Luke Macfarlane.

It’s not often I think about my outfits because I’m classic and consistent — chinos, button-up shirt, bow tie and a pair of colorful sneakers.

However, my time with Macfarlane is going to be different because my editor has convinced me not only to work out with him, but to do it on camera.

Why? Because Macfarlane is ripped. In fact, his body is almost its own character in Universal’s upcoming “Bros.” Macfarlane co-stars in the gay rom-com as Billy Eichner’s love interest, Aaron, a “straight-acting and -appearing” attorney with serious commitment issues. He spends most of his screen time shirtless or in a T-shirt.

I find the perfect gym attire at Uniqlo — navy blue sweats that are big enough to hide my not-so-worked-out body. Macfarlane arrives to the shoot at a Los Angeles soundstage with Tyler Lough, his trainer of more than a decade. Tyler is a former Abercrombie & Fitch model whose abs once adorned the clothing brand’s signature shopping bags. Both Macfarlane and Lough are wearing bright red “Bros” tees with the sleeves cut off. Macfarlane’s biceps are the size of my thighs.

I look over at the Dunkin’ Donuts I bought on my way to the shoot. Is it too late for me to hide this pile of carbs?

Macfarlane wasn’t always so jacked. “I was doing ‘Brothers & Sisters’ and it was coming near the end and I thought to myself, ‘Boy, I really want to change what I look like.’ And Tyler helped me with that,” Macfarlane remembers as he casually does curls with 30-pound dumbbells.

“His favorite thing to do is drive across the country and stop at gyms along the way,” Lough says.

“This is true,” Macfarlane says.

“He has T-shirts from a lot of gyms,” Lough adds.

Macfarlane, 42, grew up in the small town of London, Ont. and is a graduate of the Juilliard School (Jessica Chastain and Oscar Isaac were classmates). In 2008, he came out as gay in an interview with a Canadian newspaper. At the time, he was playing Matthew Rhys’ husband on the ABC family drama “Brothers & Sisters.”

“When I mentioned [coming out] to my agent at the time, what I heard back was, ‘You know you don’t have to do that,’” Macfarlane recalls. “And I was like, ‘Ah, wow. They don’t want me to do this.’ There were not a lot of people that had come out at that point. It was before Neil Patrick Harris. It was before Zachary Quinto and Matt Bomer.”

Lough guides me through some of Macfarlane’s favorite exercises, including partner clap pushups. During my pathetic attempt at pull-ups, Lough tries to encourage me. “You did one!” he says. “Let’s try for three.” I give up and glance over at the doughnuts.

Before stripping down on camera, Macfarlane limits his diet to a few sips of water over a 12-hour period. But after filming wraps, he eats whatever he wants. “I love cheese and I love wine,” he says.

Macfarlane and Eichner have several very nude sex scenes in the Nicholas Stoller-directed film. All were carefully choreographed by an LGBTQ intimacy coordinator and discussed beforehand. In one sequence, playful wrestling in Central Park between Eichner and Macfarlane leads to a hot and heavy romp in the bedroom. “I think there was a moment when Billy was like, ‘Should we spit on each other?’” Macfarlane says. “I was like, ‘Nope.'”

Eichner and Macfarlane’s characters in “Bros” spend plenty of time on Grindr. Macfarlane admits he’s been on the gay hookup site. “It’s all very scary,” he says.

Macfarlane tells me that Lough has a “secret skill”: He can determine how much someone weighs just by looking at the person.

I shoot Lough a dirty look. “I only do it to people who want to know,” he says.

Macfarlane says he’s not a fan of ab workouts. “It’s a little boring,” he says. Even so, he did at least 100 crunches a day while filming “Bros.”

I try to keep up as Macfarlane demonstrates his go-to, a series of choreographed sit-ups called a 10-1-10. “That was good,” he says. “You did really good.”

No amount of Juilliard training can make him sound sincere.

Macfarlane has been a staple of the Hallmark Channel, starring in a dozen of its Christmas titles over the past eight years, so I ask him if he’s warned execs at the cable channel that “Bros” features a running spoof of its very hetero programming. Macfarlane laughs before explaining, “I came out in 2008 and I think that freaked out a lot of people that might offer me jobs,” he says. “Hallmark gave me jobs for a long time. And not only just the gay best friend — they let me be a leading man. I’m always going to be very grateful to them for that.”

While Macfarlane will likely never know how much being out may have cost him roles, he doesn’t dwell on what could have been. “I was very fortunate to be raised by a family and, later on in my life when I went to school, by people that said, ‘Your truth is actually your most valuable thing,'” he says. “So because the people that told me that, I have to do the same thing for other people. I believe in my heart of hearts, whoever you are authentically is the thing that’s going to make you successful.”

He later adds, “It worked out well.”

After our “workout,” Macfarlane and Lough — and their hot bodies — leave the building.

I walk over to the snack table and grab a jelly doughnut. I take a big bite — and promise myself I’ll do some extra cardio at the gym tomorrow.