Box Office: ‘Uncharted’ Hanging on to No. 1 as Domestic Audiences Await ‘The Batman’ 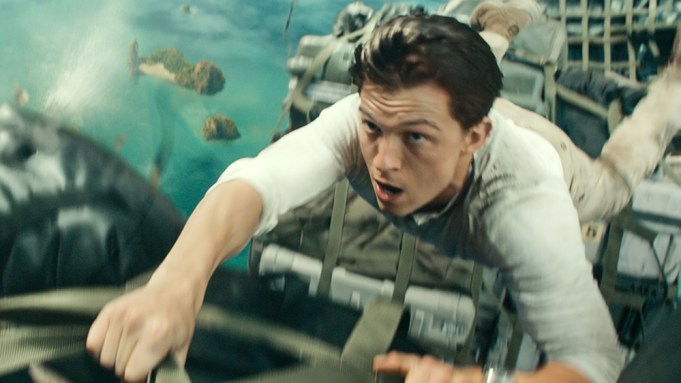 To twist the words of Gotham City District Attorney Harvey Dent, it’s always darkest before the dawn, especially at the box office. North American theaters are having a quiet weekend led by holdover releases ahead of the big kahuna on the horizon in Warner Bros.’ “The Batman.” With the Dark Knight’s rise still a few days away, Sony’s “Uncharted” has an easy path to staying on top of domestic charts in its second weekend.

The adaptation of Sony’s series of PlayStation games is holding well, with the studio projecting a $23 million gross for its sophomore outing. That’s a 45% drop from its $44 million opening — a debut that already beat initial expectations. Big-budget spectacles and adaptations of well-known properties can tend to be front-loaded in terms of box office grosses, so a drop of less than 50% is a marked victory for “Uncharted.” Last weekend, the Tom Holland action vehicle enjoyed the domestic box office’s biggest opening since the star’s last film, “Spider-Man: No Way Home,” which dominated the holiday season to become the third highest-grossing domestic film release in history.

Directed by “Zombieland” duology helmer Ruben Fleischer, “Uncharted” stars Holland as treasure hunter Nathan Drake. The rest of the cast includes Mark Wahlberg, Sophia Ali and Antonio Banderas. The film has been met with largely negative reviews from critics, turning in a 40% score on the critical aggregate website Rotten Tomatoes. Audiences have been more receptive; the film scored a “B+” CinemaScore rating, indicating general approval from ticket buyers. Variety‘s Owen Gleiberman was somewhat forgiving, calling it “a lively but thinly scripted and overlong mad-dash caper movie, propelled by actors you wish, after a while, had more interesting things to say and do.”

In terms of new releases for the weekend, neither of the weekend’s two biggest debuts is making much noise in its opening.

Open Road Films’ “Studio 666” is projected to earn $2 million from 2,306 theaters through Sunday. The film is a bit of an odd duck: a comedy horror film that stars members of Foo Fighters as themselves. Based on a story by the band’s frontman Dave Grohl, the genre film follows Foo Fighters as they battle supernatural forces while attempting to record their next studio album. While “Studio 666” likely won’t make much of an impression in its somewhat bewilderingly wide theatrical release, its extremely specific material means that it probably should find some sort of second life among Foo Fighters’ fanbase.

Metro-Goldwyn-Mayer’s “Cyrano” is projected to earn somewhere between $1 million to $2 million from 797 theaters. After a December theatrical engagement exclusive to Los Angeles to qualify for awards, Joe Wright’s musical adaptation of the classic romantic tragedy was battered around the release calendar, with MGM ultimately landing on a late February release date, likely banking on Oscar nominations that didn’t come (though the film did land a best costume design nod). With a production budget of $30 million, “Cyrano” has little hope to recoup such numbers in its theatrical run. The film stars Peter Dinklage, Haley Bennett, Kelvin Harrison Jr. and Ben Mendelsohn.

The domestic box office’s top five looks to be a tip-to-toe repeat of last weekend’s standings. “Dog,” which comes from MGM in association with FilmNation Entertainment, earned $2.47 million in its second Friday, which marks a 51% drop from its opening day last week. The Channing Tatum vehicle has been a success story at the box office, already recouping its reported $15 million production budget. The road film should expand its domestic gross to a number in the neighborhood of $30 million through Sunday.

“Spider-Man: No Way Home” took bronze, with a measly projected drop of 27% for the weekend. Now in its eleventh weekend of release, the MCU monster has never dropped out of the top three slots of domestic charts. The Sony release should expand its North American gross to a whopping $779 million through Sunday. With the Tom Holland film enjoying such slim drop-offs week-to-week, one begins to wonder whether a domestic tally above $800 million is in sights.

Fourth place should go to Disney and 20th Century Studios’ “Death on the Nile.” The Kenneth Branagh-helmed whodunnit has struggled since its debut. The release should expand its domestic gross to $32 million through Sunday, a number far below its reported production budget of $90 million.

Paramount Pictures’ “Jackass Forever” will round out the top five, with a projected $2.9 million gross for the weekend. The film’s domestic cume should surpass $50 million through Sunday. That’s not too shabby for a slapstick docucomedy carrying a $10 million production budget.