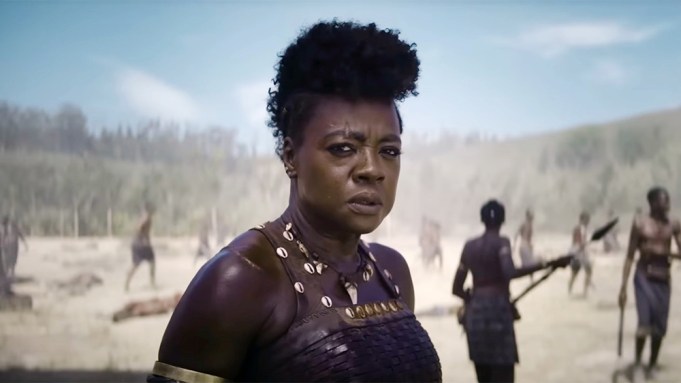 Bolstered by stellar reviews and positive word-of-mouth, the movie collected $19 million from 3,765 North American cinemas over the weekend, arriving at the higher end of expectations. Independent tracking services projected “The Woman King” would kick off with $15 million to $18 million, while Sony estimated a debut closer to $12 million.

It’s a good thing the film exceeded Sony’s ultra-conservative forecasts since “The Woman King” cost $50 million to produce, not including the tens of millions in marketing expenses, including a premiere at the Toronto International Film Festival. The movie was co-financed by eOne.

Gina Prince-Bythewood directed “The Woman King,” which tells the true story of the all-female warrior unit known as the Agojie, who protected the West African kingdom of Dahomey from the 17th to 19th centuries. Audiences were receptive, awarding the film a rare “A+” CinemaScore.

As expected, the majority of opening weekend crowds were female, with women accounting for 61% of ticket buyers between Friday and Sunday. Broken down by demographic, 60% of moviegoers were Black, 19% were Caucasian, 11% were Hispanic and 10% were Asian.

Given the strong reception from initial crowds, box office analysts believe “The Woman King” will enjoy a lucrative run on the big screen. It helps that there’s not a ton on the way in the form of competition, though Olivia Wilde’s “Don’t Worry Darling,” which also targets female audiences, opens on the big screen on Sept. 23.

“Reviews are sensational,” says David A. Gross, who runs the movie consulting firm Franchise Entertainment Research. “These movies play to healthy multiples during their holdover weeks and that should happen here.

“The Woman King” easily towered over box office charts because there weren’t many other high-profile movies playing in theaters.

The only other film to premiere nationwide, A24’s horror sequel “Pearl,” landed in a close fourth with $3.1 million from 2,934 venues. Those ticket sales mark a decline from its predecessor, director Ti West’s “X,” which debuted in March to $4.2 million and ended its theatrical run with $11 million.

A24 may not care that “Pearl” could fall short of “X” at the box office; the indie company has already announced a third chapter, “MaXXXine,” to debut in 2023. Mia Goth stars in the slasher series in multiple roles, with “Pearl” serving as an origin story about her repressed antihero.

“Barbarian,” which took the No. 1 spot last weekend, slid to second place with $6.3 million from 2,340 locations in its sophomore frame. It fell only 42% from its $10 million debut, an exceptionally strong hold for a low-budget horror movie. So far, “Barbarian” has grossed a solid $20.9 million at the domestic box office.

In fifth place, “Bullet Train” earned $2.5 million from 2,602 cinemas in its seventh weekend of release. A mainstay throughout the fall, the movie is nearing the $100 million in North America, with ticket sales at $96 million. “Bullet Train” has earned $125.7 million at the international box office, taking its global tally to an impressive $222 million.

On the indie scene, Neon’s “Moonage Daydream,” a documentary, of sorts, about David Bowie, cracked the top 10 while playing on only 170 Imax screens. The film grossed $1.225 million over the weekend, averaging a solid $7,207 per location. “Moonage Daydream,” directed by Brett Morgen, expands next weekend to approximately 600 theaters.

Another arthouse release, “The Silent Twins,” brought in $102,000 from 279 venues between Friday and Sunday, translating to a so-so $365 per screen. Focus Features is releasing the movie, which received mixed reviews since its premiere at Cannes Film Festival. Starring Letitia Wright, the real-life story centers on twin sisters who only communicated with each other.

Overall, it’s been a dreary fall at the box office so far, with ticket sales down roughly 55% compared to 2019. That’s mostly because studios haven’t been releasing films from major franchises. The next potential blockbusters won’t be until “Black Adam” (Oct. 21), “Black Panther: Wakanda Forever” (Nov. 11) and “Avatar: The Way of Water” (Dec. 16).

“A rising tide lifts all boats,” says Gross, “but right now the tide is out.”