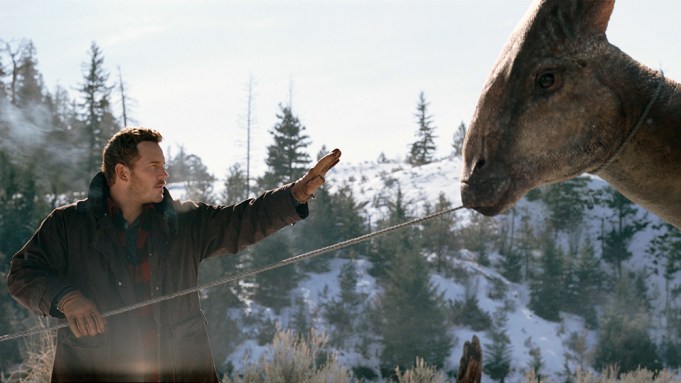 “Jurassic World Dominion” is the new apex predator at the box office.

Universal’s dino-sequel is expected to earn $142.6 million from 4,676 theaters across North America over the weekend, which would mark the highest domestic opening for a non-superhero film since COVID-19 lockdowns were first introduced. That dethrones the $126 million benchmark set by the debut of “Top Gun: Maverick” only two weeks ago.

After taking home $18 million in Thursday previews, Universal had projected the sixth installment in the “Jurassic Park” franchise to earn $132.5 million moving into the weekend.

Stretching back to Steven Spielberg’s 1993 original, which was the highest grossing domestic earner ever upon release, the “Jurassic Park” franchise has a storied box office legacy. The previous two films — “Jurassic World” in 2015 and sequel “Fallen Kingdom” in 2018 — debuted to $208 million and $150 million, respectively.

With a $185 million production price tag before marketing and distribution costs, “Jurassic World Dominion” will need to continue a run as a box office behemoth to see green.

Critics have largely disliked “Dominion,” with the film earning a series-low 31% approval rating from all critics on Rotten Tomatoes. Audiences seem to be more receptive though, as they usually are with the franchise. The dino-sequel earned an “A-” grade from CinemaScore, indicating strong responses from general ticketbuyers. While this massive opening weekend is generally proving to be a critic-proof affair, it remains to be seen how general word-of-mouth will land in the coming weeks.

In Variety‘s review, chief film critic Peter Debruge leaned kinder than most of his peers, writing that “Dominion” “comes the closest of the sequels to delivering on the ‘Jurassic’ franchise’s fearsome threat of human-dinosaur coexistence.”

Though “Top Gun: Maverick” is getting a bite taken out of it by losing premium format theaters to “Dominion,” the Tom Cruise sequel is still flying steady. The Paramount release is projected to earn $50 million in its third weekend at the domestic box office, marking an impressive 44% drop from its sophomore outing. That figure would also land the film among the top ten highest grossing third weekends in domestic box office history.

With “Maverick” inching closer to the $400 million domestic mark, the film looks likely to blast past “Doctor Strange in the Multiverse of Madness” as the year’s highest grossing release at the domestic box office sometime in the coming week.

Speaking of the “Doctor,” Marvel’s superhero sequel looks to take bronze on domestic charts for the weekend after taking in an additional $1.3 million on Friday. “Multiverse of Madness” should add an additional $4.8 million over the weekend to expand its North American gross to $397 million, inching closer to passing the $400 million mark.

Disney and 20th Century Studios’ “The Bob’s Burgers Movie” looks to take fourth, projecting a 51% drop to earn $2.2 million. The animated release expanded its domestic gross past $25 million on Friday. While the film has put in a modest box office performance, it hasn’t broken through in a way that would indicate it is reaching many viewers outside of the fanbase of the long-running animated series.

Universal’s “The Bad Guys” is expected to round out the top five, expanding its domestic gross to $91 million through Sunday. After opening to a modest $24 million eight weeks ago, the DreamWorks Animation production has multiplied its debut by 3.8, benefitting from a lack of family-friendly fare at the box office. That run will come to an end next week, with Disney opening Pixar’s “Lightyear” nationwide.