Sadie Sink on How Her Character in ‘The Whale’ Isn’t a ‘Dirtbag,’ Being Directed by Taylor Swift and Teases ’Stranger Things’ Ending for Max and Lucas

Awards Circuit Podcast: Also on this episode, Hong Chau discusses working with Brendan Fraser and the Roundtable reacts to the Golden Globes and 'Avatar 2' 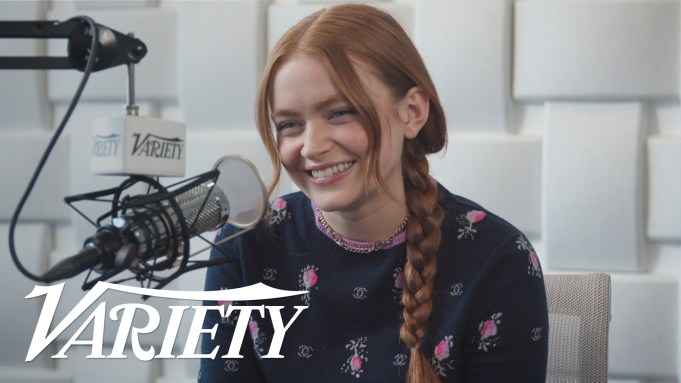 When Sadie Sink’s brother attended the premiere of her new film “The Whale” in New York City, her older brother called her character, Ellie, a “dirtbag” based on her actions throughout the film. “He was challenging me, saying ‘your character is pure evil,” Sink tells Variety. “I was like, ‘no, you have to see it from her perspective!’ I was trying to sell him because I’m very defensive of her, but she is very trying.”

On this episode of the award-winning Variety Awards Circuit Podcast, we talk to actor Sadie Sink about her role in the A24 drama, working with best actor contender Brendan Fraser and the latest news and theories on her hit series “Stranger Things” and if she thinks Max and Lucas (played by Caleb MacLaughlin) should end up together at the end.

Watch the video interview above or listen to the episode down below.

Based on the play written by Samuel D. Hunter, who adapts it for the screen, “The Whale” tells the story of Charlie (Brendan Fraser), an obese gay man who reconnects with his estranged 17-year-old daughter Ellie (Sink) after leaving her and her mother (Samantha Morton) for his younger male lover. Through his various relationships, including his best friend and caretaker Liz (Hong Chau), Charlie comes to grips with his mistakes and the painful realization of his grim future.

Sink raves about working with actor Fraser, a frontrunner for the Oscar for best actor. Even though she had never seen any of Fraser’s films before working with him, she’s now working through them, starting with “School Ties” and “George of the Jungle.”

Sink has had an extraordinary year. In addition to “The Whale,” she was also featured in Taylor Swift’s directorial debut of her music video short film, “All Too Well,” which is in the Oscar conversation for best live action short. Sink talks about getting the call and being “pitched” by Swift, along with the fear of singing in front of the superstar.

In TV, the 20-year-old sensation had the most significant arc of any character in both volumes of the fourth season of Netflix’s “Stranger Things.” All it took was a Kate Bush track and the reading of a letter to clue the world into Sink, who plays Max Mayfield.

Also on this episode, we talk to Sink’s co-star Hong Chau about her journey as an actor over the past 15 years. With roles in “Downsizing” (2014) and the landmark series “Watchmen” and “Homecoming,” she became a star to watch over the past decade.

Now, with three roles in 2022 with Kelly Reichardt’s “Showing Up,” Mark Mylod’s “The Menu” and Aronofsky’s drama, she’s hitting her stride and landing the types of roles she actively seeks.

But first, the Awards Circuit Roundtable talks about the premiere of James Cameron’s “Avatar: The Way of Water” and if it has what it takes to sneak into the Oscar race, along with our reactions to the Golden Globe nominations which omitted female directors and their films in the top categories.

Variety’s “Awards Circuit” podcast, produced by Michael Schneider, who also co-hosts with Clayton Davis, is your one-stop listen for lively conversations about the best in film and television. Each week “Awards Circuit” features interviews with top film and TV talent and creatives; discussions and debates about awards races and industry headlines; and much, much more. Subscribe via Apple Podcasts, Stitcher, Spotify or anywhere you download podcasts. New episodes post weekly.