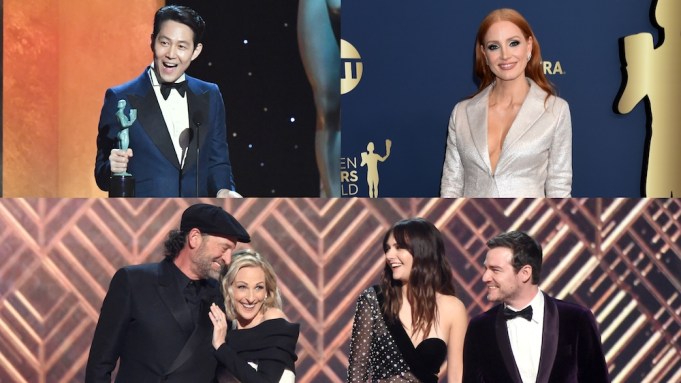 History was made at the 28th Annual SAG Awards in both the film and television categories as both “Squid Game” and “CODA” took home two major prizes. Though Netflix went into the evening with 10 nominations it failed to take home any prizes on the film side, but swept the male and female lead actor in a television drama thanks to “Squid Game.”

For TV, HBO Max and Netflix tied with three wins each: “Succession,” “Hacks” and “Mare of Easttown” were all honored, as were “Squid Game” and “Ted Lasso.”

As with every show, a few frontrunners triumphed (Jean Smart for “Hacks,” Will Smith for “King Richard”) and a few shockers.

Here, Variety breaks down the biggest snubs and surprises of the 28th Annual SAG Awards.

SURPRISE: Jessica Chastain, “The Eyes of Tammy Faye”
All season long, it’s been hard to predict who would ultimately triumph in the lead female category, so any winner would likely register as a surprise here. Up against four Oscar winners, Chastain ultimately triumphed for her transformative, sensitive portrait of televangelist Tammy Faye Bakker. This marks Chastain’s first individual win after three nominations and a win for “The Help” ensemble.

SURPRISE: Troy Kotsur and the cast of “CODA”
Kotsur has been picking up accolades all season for his breakthrough performance as Frank Rossi, the Deaf patriarch of the family at the center of “CODA,” so it wasn’t a big shocker that he took home the SAG Award for male actor in a supporting role. But it’s worth noting this is a history making win –  Kotsur is the first deaf actor to be nominated for and win a sole acting prize at the SAG Awards. And it puts him on track to make history again at the Academy Awards. Also making history was the cast of “CODA,” who ended up taking home the top prize for ensemble at the end of the night.

SNUB: “The Power of the Dog” and “Belfast”
“The Power of the Dog” is the leader in Oscar nominations went into the night with three acting nods for lead Benedict Cumberbatch and supporting actors Kodi Smit-McPhee and Kirsten Dunst, but ultimately ended up going home empty- handed – something it’s not likely to repeat on Oscar night. Similarly,  “Belfast” went into the evening with a nomination in supporting for Caitorina Balfe and its ensemble, but failed to score a win tonight.

SURPRISE: “Romy and Michele’s High School Reunion” Reunion
One of the most exciting moments of the night came in the form of Lisa Kudrow and Mira Sorvino honoring their beloved characters from the 1997 comedy, donning pink and blue pantsuits while presenting the best comedy ensemble award.