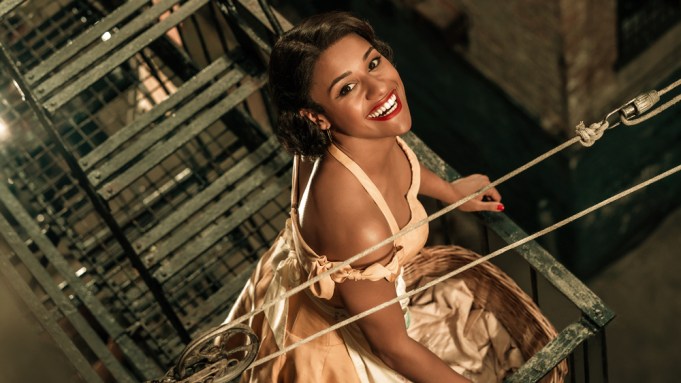 Among this year’s class of Oscars first-timers is “West Side Story” star Ariana DeBose, whose show-stopping portrayal of Anita in the movie musical earned her a best supporting actress Oscar nod.

“Well, a lot can happen before 9:30 a.m. on a Tuesday,” DeBose quipped, jumping on the phone with Variety just hours after learning the news.

Despite all the excitement buzzing around her, DeBose feels unexpectedly calm. “It’s all an illusion,” she admits. “I was so anxiety-ridden. I didn’t sleep at all last night.”

In fact, when her category was called, DeBose was out on a walk with her best friend. They celebrate all big milestones together — he was her prom date — so it made for the perfect distraction. As they strolled along the East River in New York, her team FaceTimed her.

“We were by the highway, and I could not hear a thing, but their faces were so expressive that I took it as a good sign,” DeBose recalls. “I read lips in order to receive the news.”

She adds: “I’m pretty sure I scared every runner on the East River [with my reaction]. I’m trying to be a normal person, but nothing about this is normal.”

Once I compose myself I’ll have real words to say. But until then… 🤯🙀🤪 pic.twitter.com/hfMEHQCgvR

DeBose battled through a little imposter syndrome at first, sharing that a small part of her always thinks her name is called by accident.

“Then suddenly you’re like, ‘Oh, it’s not a mistake. It’s actually a thing that happened,'” she explains. “I feel very confident in myself saying, ‘I put in the work and I did earn this, and if it all ended tomorrow, this is a damn good Tuesday.'”

But overall, the actor is still processing what it means to share a category with “Belfast” star Dame Judi Dench, who she’s eager to meet at the ceremony. (“She is one of the greatest living actresses of her time,” DeBose says.) Then comes the fact that her nomination is categorized with words like “firsts” and “historic.” For example, DeBose is the first Afro-Latina actor nominated by the Academy.

“For me, it’s a monumental moment. It’s thrilling. It’s exciting,” she says. “But I feel every ounce of hard work and determination that I’ve had to employ throughout this journey. Every rejection — or as I like to say, redirection. Every choice I’ve made. Every risk I’ve taken. Many moments during this journey have validated those choices that I’ve made. But to get to this moment … I watched [the Oscars] growing up. To feel like I’ve been seen by a group of individuals that I have long admired is beyond. It doesn’t have words.”

DeBose also joins an exclusive club of actors who have been acknowledged for playing the same role. She shares the big screen role of Anita with the legendary Rita Moreno (with whom she also got to share the screen in Steven Spielberg’s update to the musical movie). Moreno earned the supporting actress Oscar for her portrayal of Anita in 1962, making history as the first Latina to win. If DeBose wins the Oscar, she and Moreno will become the only pair of women to win for playing the same character, after Marlon Brando and Robert De Niro (Vito Corleone in “The Godfather” and “The Godfather, Part II,” respectively) and Heath Ledger and Joaquin Phoenix (the Joker in “The Dark Night” and “Joker”).

“It’s really special,” DeBose said of the distinction. “She’s a special talent and a really special woman to me and to the industry, and I’m honored to be alongside her for this entire journey.

This was a milestone that DeBose was unaware of. “And now I’m crying. I was good,” she said, trying to compose herself on the other end of the line.

“I don’t know the answer to that. It’s overwhelming. And also, it’s paramount because I didn’t have that growing up,” she explained. “When people ask me about representation, I frequently say, ‘If you can see it, then you can be it.’ I believe in our young people; we need them. And they need to see themselves in the work that we make. So if I can do that for one or two young people in the world, then it will have been worth it.”

Read more from DeBose and a host of other Oscar contenders, including “Tick Tick … Boom’s” Andrew Garfield, “The Power of the Dog” star Kirsten Dunst, “The Eyes of Tammy Faye’s” Jessica Chastain and “Summer of Soul” director Questlove as they share their stories about getting recognized by the Academy.