Plus ‘Avatar’ gains momentum and ‘Babylon’ makes its chart debut. 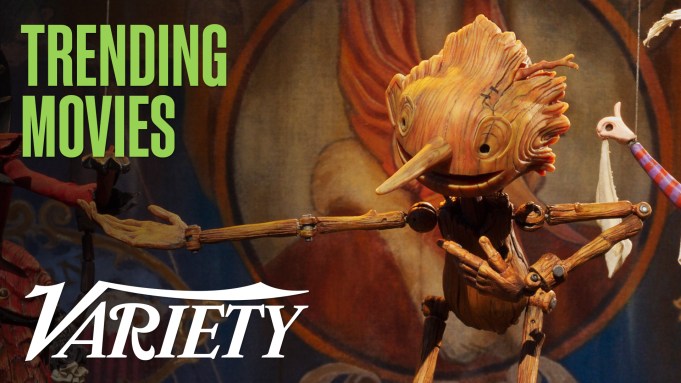 Guillermo Del Toro’s “Pinocchio” pulled all the strings on Variety’s Trending Movies chart, presented by Samsung, for the week of Dec. 5 to 11, moving from sixth place last week to the No. 1 spot following its Dec. 9 debut on Netflix.

The stop-motion film, which took more than 1,000 days to shoot and features a dark adult, subversive take on the traditional children’s story of a puppet-come-to-life, earned more than 340,000 engagements on Twitter. That’s an increase of more than 1,000% from last week, as viewers discovered the movie for themselves and applauded its artistry.

The film earned more than 100,000 engagements more than this week’s second-place finisher, “Avatar: The Way of the Water.” The James Cameron “Avatar” sequel held tight in its No. 2 spot from last week but it more than doubled in overall engagements as early critics shared their first, positive takes ahead of the Dec. 16 theatrical release.

Cameron’s current press tour is helping to bolster that conversation as he teases the third and potential fourth films in the franchise and discusses the 20th Century movie’s unprecedented VFX.

Damien Chazelle’s upcoming period piece “Babylon” rounded out the Top 3 with nearly 140,000 engagements online. Brad Pitt, Margot Robbie, Jean Smart and Olivia Wilde star in the 1920s-set flick, which explores the decadence and excess of Hollywood in that era, leading to the rise and fall of several dreamers.

Expectations are high ahead of the Paramount movie’s Dec. 23 release given the previous award-winning success of Chazelle’s 2016 Hollywood piece, “La La Land.” So far early reviews have been somewhat positive, leading to the overall buzz.

“Aquaman and the Lost Kingdom” also garnered a lot of chatter this past week, earning more than 94,000 engagements with users who speculated on rumors this could be Jason Momoa’s last outing in the role. Those rumors began following reports that new DC Studios heads James Gunn and Peter Safran are retooling the previously announced superhero slate ahead of a presentation to Warner Bros. Discovery CEO David Zaslav this week.

Rounding out this week’s Top 5 was the return of “The Whale,” which moved up one spot from last week and doubled in overall engagements with 82,000 interactions. The Brendan Fraser-led film (based on the play by Samuel D. Hunter) debuted in theatres Dec. 9, allowing viewers to weigh in on the fat suit conversation critics and early moviegoers have been having since the movie’s film festival run earlier this year.

The movie scored the biggest opening weekend of the year for an arthouse movie, with ticket sales marking the highest per-theatre average of the year to-date ($60,000 per screen).

Heading up the back half of this week’s chart was Warner Bros. flick “Black Adam,” which returned to the conversation following a Tweet from star Dwayne Johnson. On Dec. 7 The Rock himself announced the movie will profit between $52 and $72 million and confirmed there are plans to build the franchise “for the DC future.”

The tweet is in contrast to previous reports that the movie faced theatrical losses after only generating $387 million at the global box office over its seven-week run.

Biopic “Elvis” also returned to the conversation this week after the movie was named the best film at Australia’s AACTA Awards and news that director Baz Luhrmann cut a scene featuring star Austin Butler singing Dolly Parton’s “I Will Always Love You.”