Continue to Variety SKIP AD
You will be redirected back to your article in seconds
Jul 8, 2022 10:48am PT 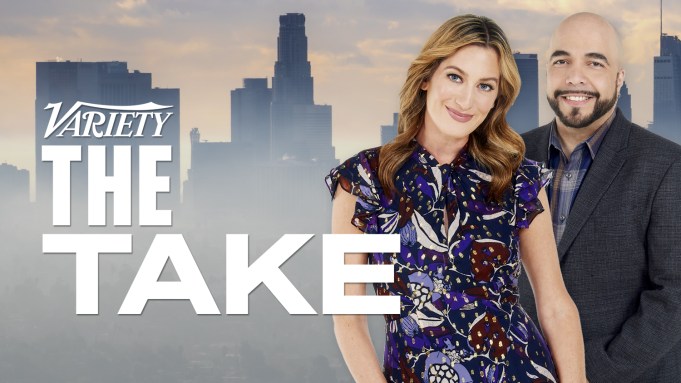 One year ago, “The Take” launched at Variety, quickly becoming one of the brand’s flagship video series. Over the past 365 days, the weekly show has covered the biggest stories in entertainment news, including Will Smith’s Oscars slap, Britney Spears’ conservatorship, Johnny Depp’s trial against Amber Heard, while also delivering insightful box office analysis and unparalleled year-round awards coverage.

To celebrate the anniversary, here are some of our favorite moments from the biggest stories of the year.

“The Take” Predicts “CODA” Will Win the Oscar

Long before anyone was predicting “CODA” could win the best picture Oscar, “The Take” got it right. With the industry’s leading awards journalist as one of our hosts, “The Take” brings unparalleled awards’ analysis all year long. Variety’s senior awards editor, Clayton Davis, gives his predictions on the show each week, long before anyone is even talking about them — and that was most certainly the case for “CODA.”

The best actress race is wide open, according to Variety’s #Oscars expert @ByClaytonDavis.

“The Take” Takes on Cannes

“The Take” has covered every fest from Toronto to Venice to SXSW, delivering the latest news on the projects coming out of the festival circuit. This past year, Wagmeister and Davis touched down in Cannes for a special episode, live from the South of France.

“The Take” has been covering Britney Spears’ conservatorship saga from the very beginning. Wagmeister has lead Variety’s coverage on the pop star’s legal battle with live reports from inside the courtroom and outside the courthouse with the #FreeBritney movement. From the singer’s passionate testimony in June to her 13-year conservatorship being terminated this past November, “The Take” has been on the scene.

“Britney Spears, her whole life, has given so much,” says our cohost @EWagmeister about #FreeBritney. “While she’s been giving, the world has just been taking from her…this is such a grave injustice.” | Variety The Take presented by @AppleTV https://t.co/JX0gSGj4kq pic.twitter.com/F5Enpyyd0s

“The Take” Live on Oscars Night

On Oscars night, Davis was at the ceremony, and we loved being joined on-set by a special guest host, Variety’s senior entertainment writer, Angelique Jackson, who helped break down the story that everyone is still talking about: Will Smith slapping Chris Rock.

Of course, the Emmys are no exception from awards season. Our awards’ coverage on “The Take” brings the best in television and film, letting those who matter in the industry know which series and movies they should be paying attention to.

In a conversation with our host Davis about his work, including “The Card Counter,” “Scenes From A Marriage” and “Dune,” Oscar Isaac weighed in on the IATSE fight.

Oscar Isaac lends his support to IATSE: “It's staggering, the amount of abuse that I've seen on sets… It's way past time that something's done to back up the people that are allowing for these movies to get made.” https://t.co/q35QShp9Km | Variety The Take presented by @AppleTV pic.twitter.com/veCwLCBUvQ

In the wake of the “Rust” tragedy, Wagmeister interviewed Dwayne “The Rock” Johnson on the red carpet. She asked one of the world’s biggest action stars his stance on using firearms on set, prompting Johnson to pledge stop using real guns on all of his movies.

This week, @therock pledged to stop using real guns on his productions in response to the tragedy on the set of #Rust: “We’re not going to worry about the dollars; we won’t worry about what it costs.” | Variety The Take presented by @AppleTV https://t.co/XFigklsxMg pic.twitter.com/cAT4n2TIVE

When Louis C.K. won a Grammy award, our host, Wagmeister — who has covered the #MeToo movement extensively from Matt Lauer, Harvey Weinstein, R. Kelly and Bill Cosby — weighed in on Hollywood’s hypocritical handling of abusers in power, no matter their fall from grace.

Louis C.K., who has admitted to several accounts of sexual misconduct in the 2010s, won a Grammy last weekend. "This is just unbelievable," our co-host @ewagmeister says. What's your take? | Variety The Take presented by @AppleTV https://t.co/d8d6yLnuQP pic.twitter.com/AzKVhXqiYn

“The Take” covers everything in Hollywood — the good, the bad; the serious and the fun. So when David Spade stepped into Chris Harrison’s shoes as guest host on “Bachelor In Paradise,” we had to talk to the comedian about his time in Mexico with the ABC dating show, and his take on “cancel culture” in comedy.

“The Take” has been greenlight through all of 2022, and that might just be our favorite moment. What a year it’s been, and we can’t wait for the next. Thank you to all of our viewers, and please, continue to weigh in on Variety’s social media to let us know: What’s Your Take?