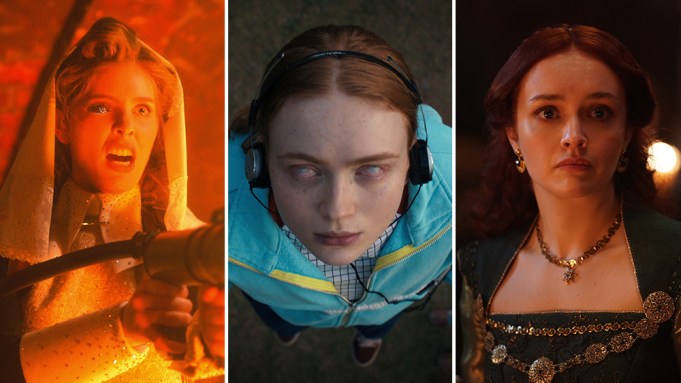 After falling to second on Variety’s Trending TV chart last week, “Stranger Things” was back up top for the week of June 20 to 26. The show climbed 10% week-over-week in terms of overall engagement as fans gear up for the drop of Season 4’s last two episodes on July 1.

Plenty of that conversation was driven by a new trailer Netflix released to promote the two-part finale, as fans speculated about which of their favorite characters might see their demise in the upcoming episodes. Accompanying first-look images also offered clues and helped fuel the fire. One thing fans know for sure is these final two episodes will feel more like events: the penultimate episode is 85 minutes long and the finale clocks in at nearly two and a half hours.

According to the Duffer Brothers, Netflix Executives have cried during the pitch of Stranger Things 5.

Furthermore, they've mentioned that season 5 will come a bit quicker than #StrangerThings4! pic.twitter.com/XD7z2JFDWI

Netflix also scored second place on this week’s chart following the return of “The Umbrella Academy,” with more than 256,000 engagements. The third season dropped on Wednesday with 10 new episodes following a two-year hiatus. As fans caught up with the family of superheroes, critics have applauded the way the series introduced the character of Viktor following Elliot Page’s real-life transition.

In the first two episodes, fans met Viktor in a storyline that was drawn from Page’s experiences coming out in 2020. The show also hired trans writer Thomas Page McBee to help oversee the storyline, which McBree said, in an essay for Esquire, had to happen quickly and “without the hand-holding usually provided for cisgender audiences,” given how events picked up shortly following the Season 2 finale.

what the hell is a kugelblitz? Season 3 of #TheUmbrellaAcademy is now streaming only on @Netflix. pic.twitter.com/2LW1TBHIbZ

Another steady Netflix player, “Heartstopper,” also continued to make its Trending TV chart pulse known, landing in fourth place again this week, with 150,000 engagements. The series debuted two months ago on the streaming service and has been on the chart ever since. This week, it’s trending up in total engagements.

happy two months since Heartstopper was released on Netflix 💘 pic.twitter.com/rKhFVamQ5F

Rounding out the Top 5 was “Ms. Marvel” on Disney+ following a new episode release on Wednesday. The first season officially reached its midpoint last week as more fans discovered the Iman Vellani-led MCU series for the first time. The superhero show continued to lose overall engagement and dropped another 10% week-over-week, however, shifting from third to fifth place.

If you love seeing Peter Parker trying to navigate being a teen with his newly found spider powers, but say you’re “not the demographic” for Kamala Khan/Ms. Marvel, I need to you to think hard about why that is.

Heading up the second half of this week’s Top 10 was the six-part debut of “Money Heist: Korea - Joint Economic Area.” The Korean remake of Álex Pina’s Emmy-winning “La Casa de Papel (Money Heist)” had a baked-in audience heading into the premiere, thanks to fans of the original. It came in strong with more than 103,000 engagements.

no joke, Korea did so well in their version of money heist !!! 👏💯 I was amaze the whole time, the scenes, the portrayals, the cinematography and all. 😭🤍#MoneyHeistKorea #MoneyHeistKorea_JointEconomicArea pic.twitter.com/VOColxDRIX

Much like the original, the K-drama revolves around a group of thieves plotting an unprecedented money heist, only in this series, Korea is on the brink of unifying. The action takes place in the Joint Security Area (located along the North and South Korean divide), where a mint pumps out a new currency. Fans were particularly invested in all of the current pop-culture references from the episodes.

👧🏻The fans of the K-pop group BTS are called ‘ARMY’. They exist everywhere in the world.
+
pic.twitter.com/c65Wocwc86

Another returning contender, HBO/HBO Max’s “The Last of Us,” sunk its teeth into this week’s chart. After failing to hit the Top 10 last week, the upcoming video game adaptation starring Pedro Pascal and Bella Ramsey earned 86,000 engagements, landing in seventh place.

that’s a wrap.
crew taking down the QZ set
today in Calgary.

An official confirmation from “Jimmy Kimmel Live,” meanwhile, earned the late-night program more than 52,000 engagements this week, propelling it onto the chart at No. 8. The show welcomes Aespa on June 29, when the girl group is in town for its first-ever American showcase, SYNK in LA. According to ABC, the group will perform its latest English single, “Life’s Too Short.”

Rounding out this week’s chart, in ninth place, was anime offering “One Piece” on Netflix and Hulu with 47,000 engagements and Starz’s “Outlander” in 10th with 43,000.